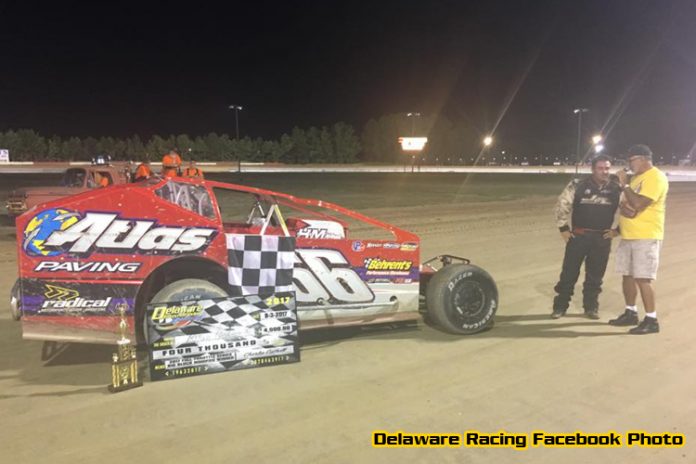 DELMAR, DE – Round No. 4 of the Full Throttle Racing Series managed to dodge the pop up thunderstorms that surrounded the track Thursday night at the Delaware International Speedway. The first three races in the series had provided three different winners – Rick Laubach, Ryan Watt and Craig VonDorhen and on Thursday night, they would chase first time winner, Ryan Godown, driving the Petruski Racing No. 66, to the checkered.

Howard would draw the pole starting spot in the ASI Sportswear Redraw. Howard had been the quickest in hot laps and in the heat. At the drop of the green he began to pull away while Jordan Watson, Billy Pauch, Jr., Ryan Godown and Carson Wright were battling it out in the top five.

Just as it appeared that Howard would be the car to beat he scrapped the wall coming off the second turn. The contact resulted in a flat right rear bringing out the only caution in the 40-lap main on lap five.


Jordan Watson was now on the point with Godown getting by Ryan Watt for second. The lead trio came off the fourth turn three wide on lap eight with Watson holding off the challenge until Godown found the bite on the bottom to make the pass for the lead.

Once out front, Godown was not able to shake Watson, Watt and Pauch, Jr. Craig VonDohren, looking for back to back wins in the season was on the move cracking the top five on lap nine. The front pack was intense and Watt’s persistence paid off as he got by Watson on lap 14. Pauch, Jr. would follow into third one lap later bringing VonDohren into fourth.

VonDohren was up to third by lap 17 as the lead pack threaded its way through heavy traffic. Rick Laubach made his presence know just past halfway when he dropped Jamie Mills out of fifth after starting in 13th. Three laps later Laubach got by Pauch, Jr. for fourth but the lead trio had distanced themselves from the rest of the field.

Godown was never able to shake Watt and VonDohren but seemed to have the upper hand in traffic. With two laps to go VonDohren got by Watt but Godown would make no mistakes as he drove to the $4000 win becoming the fourth different winner in as many Full Throttle races.

The three previous winners filled out the next three spots with VonDohren second, Watt third and Laubach fourth. Pauch, Jr. turned in his best performance at the speedway finishing in fifth. Nineteen of the 24 starters were running at the finish.

A solid field of AC Delco 602 Sportsman were on hand Thursday night. Heats were won by Adam White; Andy Hammond and Matt Stangle. The ASI Sportswear inversion draw put David Crossman on the pole with Hammond and White in row two.

Jordn Justice would take advantage of the high groove. “I found some bite on the top,” said Justice, “and I went for it (at the start).” Hammond led lap one but it took two restart before the second lap was completed.

When lap two did get in it was Justice riding the high groove to the front for lap three. Stangle got by Hammond for second while David Jenkins and Scott Hitchens bartered for fourth.

A streak of four yellows through halfway would keep the field tightly bunched. Hitchens was able to get by Stangle on one of the restarts but Stangle returned the favor on the next one. Duane Crocket joined the lead group and with three to go got by Hitchens for third.

Justice would make on mistakes as he drove the L&J Sheet Metal No. 94 to the $1000 win, his first of the season. L&J Sheet Metal was also the lap money sponsor for the Sportsman. Stangle ended a solid run in second with Crockett, Hitchens and Hammond rounding out the top five.

In the 12-lap Super Truck feature it was pole sitter, Mike Kennedy setting the pace for the first two circuits before Matt Esham squeezed under for the lead. Robert Smith shot from twelfth to second by lap four and at halfway it was Esham, Robert Smith, Brian Meisenholder, Kennedy and Dale Elliott in the top five.

The only caution came on lap eight when Robert Reed lost his battery and coasted to the pits. Smith was able to get by Esham on the restart for the lead. Esham started to slow with a flat front tire. Kennedy held second until David Smith, who started in 15th took the spot with one to go.

Robert was able to hold off brother David to the checkered as the Smith’s once again finished one-two. Kennedy came home third with Jerry Hill and Elliott rounding out the top five.

In the 12-lap Delmarva Charger feature it was Tanner Marvel turning in a flawless performance to lead wire to wire in the caution free event. Robert “Pacman” Paczkowski chased from second through halfway before Scott Calhoun came from the rear to take the second spot.

Calhoun was hoping for a caution but it would not come and Marvel cruised to the win. Calhoun finished in second with Paczkowski rounding out the top three.