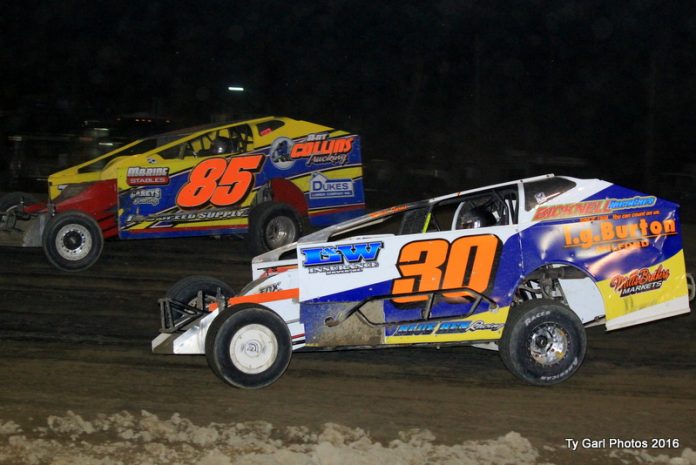 DELMAR, DE – A shuffle due in large to the weather combined the Fall Championship qualifiers for both the NAPA Big Block Modifieds and the S.R. Pete & Sons
Super Late Models on Pepsi Night Saturday at the Delaware International Speedway.

A solid field of 22 Big Block Modifieds were on hand with heat wins going to Brandon Watkins, H.J. Bunting and Howard O’Neal. The 30-lap Fall Championship qualifier got off to a rocky start when a jingle in the fourth turn collected Dave Dissinger, Jamie Mills, JoJo Watson, T.J. Williams, Carson Wright, Clay Tatman and Scott VanGorder. Mills, Watson and Dissinger restarted at the rear while Williams, Tatman, Wright and VanGorder were done for the night.

Howard O’Neal started on the pole and immediately got comfortable in the high groove. Jordan Watson quickly found second after starting in seventh while Brandon Watkins, Robert Dutton and H.J. Bunting battled for the third spot.

O’Neal held off Watson for ten laps but smoke started to pour from the rear of the car and O’Neal coasted to a stop to bring out the yellow and to turn the lead over to Jordan Watson. The yellow was the break that Mills needed as he had worked himself back up to just outside the top five when the yellow flew.

Watson tried every line he could find through the turns but could not match Mills’ speed. He would drive to his third win of the season. “We wanted to pad our point lead tonight,” said Mills. “And that is what we did.”

Jordan Watson ended a strong drive in second with Bunting posting his best finish of the season in third. Fourth went to JoJo Watson who also returned from the rear allowing him to hold on to his second spot in the standings and Robert Dutton turned in one of his best runs this season finishing in fifth.

The S.R. Pete & Sons Super Late Models went 25-laps on Saturday night with the winner earning a guaranteed starting spot in the Delaware State Dirt Track Championships. Donald Lingo, Jr. and Mark Pettyjohn both looked strong in winning their qualifying heats but it would be Ricky Elliott rocketing from third to first to lead lap one.

Lingo wasted no time moving from fifth to second but it was Nick Davis who seemed to be on a mission on the outside climbing from 11th to second by lap three. Elliott would get into a rhythm as the race stayed under the green and by halfway he had a comfortable lead over Davis with Lingo, Pettyjohn and point leader Ross Robinson all running strong in the top five.

With three to go, Geoff Carey got around bringing out the first caution and erasing Elliott’s 3.72 second lead. Elliott controlled the restart but the battle was for second as Pettyjohn and Davis swapped the spot several times in the closing laps.

Elliott would get the victory and Davis was able to get by Pettyjohn in the final turn to capture second. Lingo finished in the fourth spot with Robinson rounding out the top five. The finish tightened up the battle for the championship with just one race remaining. Robinson, Pettyjohn and Lingo all within 45 points.

The AC Delco 602 Sportsman feature provided lots of action. Nick Alberti drove by David Jenkins and Danny Smack to take the lead at the start. Point leader, Scott Hitchens was flying on the high side moving from ninth to third on lap one.

Hitchens got by Smack on a restart and began to pressure Alberti taking the lead for lap five. The chase was set by halfway with Hitchens, Jordn Justice, Joe Tracy, Adam White and Mike Hough all in contention.

The caution was out for a final time with one to go setting up a shootout between Hitchens and Justice. Justice drove to the bottom taking the lead in the first turn. Hitchens would following on his tale to turn three where he duplicated Justice’s move and regained the lead coming off of turn four for the checkered. Tracy finished a close third with Hough crossing the line in fourth but failing post race tech. Fourth would be awarded to White and Ryan Riddle would round out the top five. Heats were won by Hitchens and White. With the win Hitchens secured his second track championship in the division.

The 15-lap RUSH Crate Model feature produced a first time winner this season. Trevor Collins led the first lap after starting in third with pole sitter, Scott Tessman riding in second. Mark Pettyjohn was making his first start in a new car designed by his brother Mark. Pettyjohn drove from tenth to third on lap one then continued to cruise the high groove into the lead one lap later.

Collins held on to second but watched as Pettyjohn drove away into the distance. The race would go caution free from lap one on and Pettyjohn would win by a huge margin over Collins. Tessman drove a smooth race to finish in third with Matt Glanden fourth and Matt Hill fifith. Heats were won by Hill and Glanden.

Jake Nelso led the first lap of the 15-lap Mod Lite feature before Ray Gulliver powered on top. Bobby Watkins, making his first start in the division this season in the Nick Nash backup car was quickly up to second from ninth.

Just before halfway, Watkins moved on top. With Watkns in control Tim White began to climb through the top five and was up to third with five to go. Watkins would take the checkered with White getting second after Gulliver began to slow on the final lap. Nick Nash finished in the third spot with Gulliver fourth and James Hill fifth. Heats were won by Watkins and Nash.

Watkins said he had seen on Facebook in the morning where Nash was looking for someone to shake down his backup car that had been having overheating problems. Watkins took Nash up on the offer and handed the team a win. When asked how the car was now he replied, “She’s good!”

In the 12-lap Vintage Stock Car feature Mark Williams and C.J. Schirmer took advantage of their outside starting positions to jump into the top two spots for lap one. The one and only caution of the event happened on lap four when Kelly Putz came to a stop at the edge of the track.

On the green Williams was able to open a comfortable lead over Schirmer. Freddy Brightbill stayed in the hunt to the checkered with Williams, Schirmer and Brightbill finishing in the top three. Fourth was first Sportsman, Josh Smith and Todd Miller, also in a Sportsman, rounded out the top five.