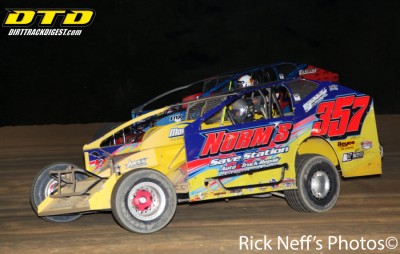 DELMAR, DE – Dwayne Howard of Oley, Pa. bypassed practice for the Freedom 76 at the Grandview Speedway and made the long tow south to the Delaware International Speedway on the southern Delaware line Friday night. Howard was looking for redemption in round five of the Full Throttle series after leading before scraping the wall and ending his night in round four.

Redemption was to be had as Howard worked lapped traffic to perfection and held off Ryan Watt to become the fifth different winner in as many races in the series.

Heats for the 24 Big Block Modifieds were won by Jordan Watson, Jamie Mills and H.J. Bunting. The top four from each heat went into the inversion draw for the start of the main. Jim Britt drew the pole after finishing third in his heat with Scott VanGorder starting in second.

Britt would lead the first five circuits while Howard, who started in fifth, worked his way to the front. Howard eased by Britt to lead lap six while all eyes turned to Watt who had started in eighth and was running in fourth behind Bunting.

By lap nine Watt was up to third and the lead was starting to thread his way through the back of the pack. Watt got by Britt and quickly began to close the gap with the leader. Howard’s almost two second advantage was erased on lap 13 when Michael White came to stop. “On the restart Watt was able to match speed with Howard as the lead duo began to pull away for the field.

At the halfway sign the top five were Howard, Watt, Britt, Jordan Watson and VanGorder. That order remained unchanged until four to go when Britt slowed and pulled to the infield and Jimmy Horton moved into the top five.

Watt at times was able to close to Howard’s back bumper but the high groove had gotten choppy and Watt had to hope for a bobble from the leader. That mistake would never come as Howard drove to the 40-lap, $4000 win. Watt, who has run exceptionally well in the series settled for second with Jordan Watson ending a good run in third. Fourth went to VanGorder and Horton rounded out the top five.

“The track was really bitey,” said Howard. “It’s tough for us to come down here but we have been running good in the series when we come down here. We had a good race car tonight and I knew it was going to be very hard for anyone to go around me with the track kind of chopped up at the top.”

The top five in the AC Delco 602 Sportsman heats went into the inversion draw. Jon Callaway making his first start in several year drew the pole and led the field for the first three circuits before the yellow flew.

Dwayne Crockett, who was running in third at the time of the yellow hit a perfect restart on the outside and took the lead going into the first turn. Jordn Justice following into second and Adam White took third. The top three remained unchanged through halfway with Callaway holding on to fourth and Joe Tracy in fifth.

A pair of restarts just past halfway shuffled the top five with David Jenkins moving into third while Nick Alberti followed Callaway in fifth. Crockett was able to open a 1.12 second lead over Justice to become the first repeat Sportsman winning in the series. Justice finished in the second spot with Jenkins third. Fourth went to Callaway and Alberti rounded out the top five. Heats were won by Trent VanVorst and Tracy.

Thanks go out to L & J Sheet Metal for providing the lap sponsorship.

Scott Calhoun wasted no time getting to the front as he shot by both Jerry Baker and Tippy Martinez. Derek Swafford got to second for a lap then Robert “Pacman” Paczkowski took over the spot.

Calhoun gave up a comfortable lead when the yellow flew with three to go when Barker slowed in turn four. Calhoun was perfect on the restart and drove to the win over Pacman in second and Tanner Marvel, who started in 11th finishing third. Fourth went to Swafford and Geoff Carey rounded out the top five.

Landy Adams set the pace through the first half of the Little Lincoln Vintage/Street Stock 12-lap feature. Action was intense as Adams, Kirk Lawson and Joe Tracy came off the second turn three wide. Adams held on to the lead with Tracy second and Matt White working into third.

Lawson came to a stop with three to go to bring out the final yellow. On the restart Tracy made his move and took the lead. He would drive to his second straight checkered. Adams settled for second with Matt White third. Fourth went to Jordan Herbert and Bunky White rounded out the top five. First Street Stock was Jarod Millman in eighth.

Jerry Hill led the first four laps of the 12-lap Super Truck feature. Matt Esham worked his way on top for the next two circuits but Hill’s persistence would allow him to regain the lead just past halfway. Hill would make no mistakes and hold off Esham to the checkered. Robert Smith came from 16th to finish in third with Dale Elliott fourth and Matthew Smtih fifth.