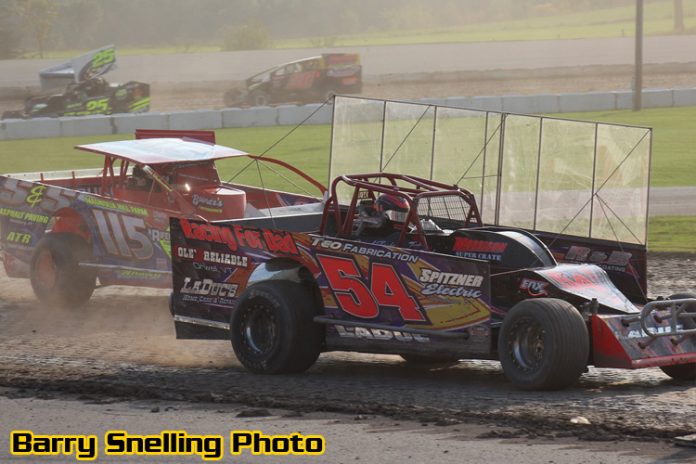 Other race winners during the event included Kenny Martin Jr., Chris Murray, Jesse Durkee, and Bill Fountain, while both Rob Yetman and Cory Gray celebrated championships.
LaDuc was a convincing winner in the Central Vermont Motorcycles Sportsman Modified race; his No. 54 car ran roofless and benefitted from the aerodynamic stability of the large sail panel. He led every lap in route to his fourth win of the season and the 50th of his Devil’s Bowl career, giving him sole possession of second place on the track’s all-time victory list. LaDuc dedicated the win to his mother – long-time Devil’s Bowl staple Barbara LaDuc – who is at home recovering from recent health issues.

Track champion Kenny Tremont Jr. experimented with several body configurations during the day, and in the main event he carried a combination of three smaller sail panels and a front-mounted Sprint Car wing to finish in second place. Jimmy Ryan, Rookie of the Year James Fadden, and Floyd Billington – all using rear-mounted sail panels – completed the top five in the finishing order.

Kenny Martin Jr. of Ballston Spa, N.Y., won the season finale for the visiting King of Dirt Racing Series Pro Stocks, but it was Castleton, N.Y.’s Rob Yetman celebrating the championship. Martin started on the pole position and led every one of the feature race’s 29 laps, but was never assured of the win until the checkered flag waved; at one point, Martin was part of a four-wide battle for the lead.

Jon Routhier made late moves to take second place, and Byron Wescott saw a full-contract, final-lap battle with Rich Crane go his way for third place. Crane, who challenged Martin for the lead for much of the race, settled for fourth place with Yetman fifth.


Yetman entered the race with a seven-point lead on Nick Stone and 13 points on Martin, but – along with Stone – was involved in two early crashes. Yetman was forced to come from 15th place with a badly-battered race car to outdistance Martin and Stone for the King of Dirt championship.

Chris Murray of Fair Haven, Vt., capped his championship season in the Rosen & Berger Auto Recyclers Super Stock class by winning that division’s 20-lap open competition race. Murray used wider tires and a billboard sail similar to LaDuc’s to rebound from a mid-race spin and take his sixth victory of the season.

Jesse Durkee of South Royalton, Vt., won the most exciting race of the night, taking the 20-lap, open competition, $750-to-win feature for the Portland Glass Mini Stock division’s “Sweepstakes” finale. Durkee, who won the Bear Ridge Speedway championship 24 hours earlier, came from 10th place at the start to grab the lead at lap 6, but his engine began to give up at the halfway mark.

Home track driver Andrew FitzGerald reeled Durkee in and took the lead with four laps left, but the pair diced back-and-forth for the remainder of the race. FitzGerald blew a tire coming to the finish line and Durkee beat him to win by less than six inches. Matt Boucher drove his Northeast Mini Stock Tour entry from 15th to finish a close third, followed by Saturday night Fonda Speedway winner P.J. Bleau and Devil’s Bowl regular Jason Porter.

Bill Fountain of Altona, N.Y., added another significant accomplishment to his stat line by winning the 50-lap Enduro Series finale, and will go down in history as the final driver to win on the current 3/10-mile Dirt Track at Devil’s Bowl. Earlier in the month, Fountain was the final winner on the half-mile Asphalt Track; Devil’s Bowl Speedway will transition to an all-dirt half-mile surface for the 2018 season.

Cory Gray of Clarendon, Vt., was part of an entertaining mid-race fight for the lead with Brett Wood and Shawn Fountain, and held the point until Bill Fountain took over with eight circuits remaining. Gray finished second to wrap up his second-straight Enduro championship. His twin brother, Kyle Gray, finished third in the race, one lap down, driving the popular No. 7 “Chicken Pit” car. Jake Barrows finished fourth, three laps behind, with Cam Gadue fifth, four laps off the pace.