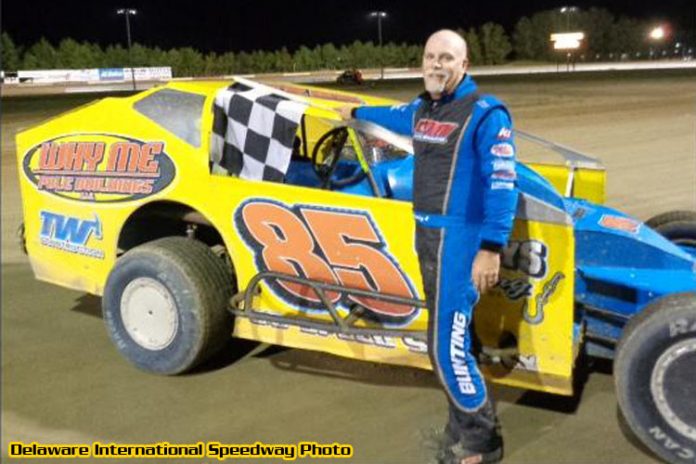 DELMAR, DE – Three point battles went right down to the wire and three drivers picked up their first wins of the season including one first career win Saturday night at the Delaware International Speedway.

Unofficially until official points are posted mid-week the following will be champions for 2017: Jamie Mills in the NAPA Big Block Modifieds; Ross Robinson in the S.R. Pete and Sons Super Late Models; Scott Hitchens in the AC Delco 602 Sportsman; Joe Warren in the RUSH Crate Late Models and James Hill in the Mod Lites.

H.J. Bunting was on a mission from his tenth starting spot after a couple quick cautions found himself up to fourth by lap five. Bunting was working the outside to perfection taking Watkins for third and a lap later getting by White for second. Bunting immediately began to pressure Wright, taking the lead on lap ten.

Kevin Sockriter was on a charge and was up to third behind Bunting and Wright. Sockriter may have been pushing a little too had as he spun bringing out the final yellow with ten to go. This put White back in third with Watkins fourth and Dave Dissinger in fifth.

Bunting was able to pull away to a comfortable lead as the defending champ drove to his first win of the season. Wright turned in his best drive finishing second and Watkins got by White for third after a race long battle between the two. Sockriter was able charge from the rear to get by Dissinger on the final lap for fifth.

“I was starting to wonder if I was going to win one this year,” said Bunting. “It’s been a miserable season for Jake and the crew. We came out with this new car two weeks ago and we are starting to get it dialed in. I just wish that Jamie (Mills), Jordan (Watson) and the guys had been here tonight to just see where we stand.”

Heats were won by Scott VanGorder and Sockriter. Jamie Mills clenched the point championship prior to Saturday night and was competing at Bridgeport.

The 20-lap S.R. Pete & Sons Super Late Model feature was a real barn burner. Ross Robinson came into the contest just 20 points ahead of Mark Pettyjohn. Robinson finished second behind Kerry King in the first heat while Pettyjohn ended up fourth adding an additional 15 points to Robinson’s lead going into the main. Nick Davis captured the second heat over Donald Lingo, Jr. who remained at 45 points back.

King started in third but at the drop of the green shot to the high groove and past both Rob Schirmer and Kevin Scott for the lead. The “Wild Child” Amanda Whaley marched from fifth to second by lap two with Austin Hubbard coming from then to third in tree circuits.

With King comfortably out front, Hubbard went to work on Whaley taking second on lap five. Whaley settled into a good battle with Nick Davis until the No. 4 went up in smoke bringing out the yellow on lap nine.

King was able to hold his advantage over Hubbard on the restart with Davis now in third and Mark Pettyjohn fourth. The yellow would come out again with five to go as Hubbard’s car locked up at the stripe and slid to a stop in the infield.

King now had Davis on his spoiler with Pettyjohn up to third, Lingo in fourth and Elliott holding off Robinson for fifth. That would be the order for the final laps as King drove a flawless race to post his first win of the season. In victory lane, King gave thanks to his family and to World of Outlaw driver Chub Frank who allowed King to travel with him and learn a lot about setting up the car. Davis was recognized in victory lane for finishing second overall to Dale Holledge in the Battle of the Bay Super Late Model Series and Robinson’s sixth place was enough to earn him his first championship at the track.

“I only slept about three hours last night,” said Robinson. “This has been a real up and down year. Destroying my primary car in the Battle of the Bay was a real set back. This car was never as good but thanks to everyone that helped it got up there.”

The RUSH Crate Late Models had a tight point battle coming into the final point race. Joe Warren, looking for his sixth championship held just a 36 point lead over Sparky White and a 50 point lead over both Matt Glanden and Matt Hill.

Jamie Eichholz led the first lap before David Pettyjohn moved on top. Lap two spelled near disaster for Joe Warren as he was collected in a tangle between the second third and fourth place cars of Chip Disharoon, Eichholz and Brandon Sturgis.

Warren was able to make a dash into the pits to address sheet metal issues and returned a half track behind the leaders when the green flew. Hill was focused on winning the championship and powered into second with Mike Wharton tucking in in third.

Warren, try to come from the rear tangled with Scott Tessman coming off four with Tessman coming to a stop against the wall and Warren continuing but heading back to the pits. Both were able to rejoin the field. Warren’s woes continued as he spun by himself to bring out his second caution on lap seven.

On the restart Wharton got back by Hill for second as Pettyjohn maintained the lead. Matt Glanden moved to the fourth spot with Sparky White closing in fifth. With five to go the red was out as Trevor Collins took a wild ride down the back straight. Collins got into the outside wall and climbed over it into the billboards before coming back down on the track and sliding upside down to the third turn. Collins’ car was righted and Collins climbed from the car uninjured.

The battle for second reheated on the restart with Hill climbing back to second with three to go. Pettyjohn would make no mistakes as he held off Hill and drove to his second straight victory. Wharton finished in third with White fourth and Derek Magee fifth. Warren was able to climb to ninth which was just enough to unofficially earn him his sixth crown by a mere five points. Official points will be posted mid-week. Heats were won by Hill and Disharoon.

In the 15-lap AC Delco 602 Sportsman feature, rookie Sean Metz looked like a seasoned veteran in leading the first three laps holding off the challenges of both Nick Alberti and Adam White. White made a smooth pass to lead lap four before the yellow flew when Jeff Marker lost a wheel going into turn one.

Alberti grabbed second from Metz on the restart. Metz would lose the handle in the second turn collecting both Joe Tracy and Daniel Johnson. Once out front White had to hold off the challenges of Alberti while Scott Hitchens worked through the field into third.

The trio would put on a great battle for the lead in the closing laps. Alberti tried the high groove around White which allowed Hitchens to slip by with one to go for second. White was not to be denied his first career win as he held off Hitchens to the checked.

White was the 2016 Rookie of the Year and had never raced prior. He was elated in victory lane and gave credit to his dad (modified driver Michael White) and his family and friend for supporting him and his love of racing. Hitchens, with his five wins this second had clenched the his second championship prior to the race. Alberti ended a great run in third with David Jenkins fourth and Ryan Riddle fifth. Heats were won by Jenkins and Alberti.

In the 15-lap Mod Lite feature Kirk Miles, Sr. and Jake Nelson started in the top two spots. At the drop of the green, Miles, Brian Gladden and Nelson locked into the battle with Miles leading lap one but Nelson shot by both to lead going into turn one.

Ray Gulliver was the new leader with point leader James Hill riding second and Tim White who entered the night second in points just 55 markers behind Hill. White challenge for the title ended on lap six when he slow to a stop at the top of the fourth turn.

On the restart, Hill turned up the heat on Gulliver taking the lead at the halfway sign. The race would remain green as Hill drove away to his second consecutive championship and his ninth win of the season. Gulliver finished in second with Jerry Barker turning in a person best in third. Curt Miles, Jr. got by Aaron VanVorst on the final lap to finish in fourth with VanVorst rounding out the top five. Heats were won by Hill and Miles, Jr.