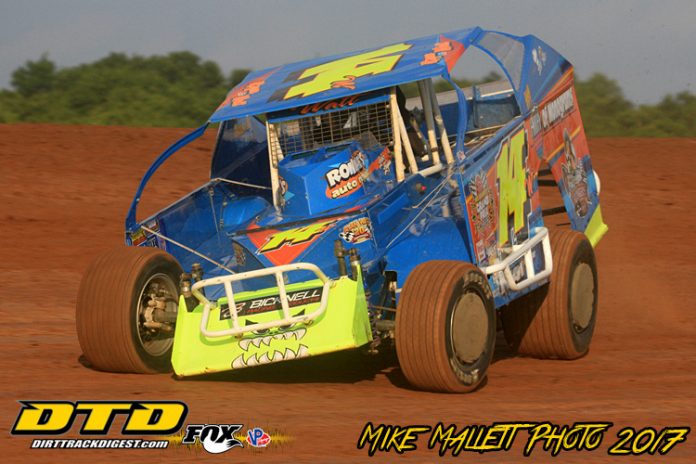 DELMAR, DE – Ryan Watt of Boyertown, N.J. has taken a real liking to the Delaware International Speedway in 2017. On Friday night he topped a strong field of Small Block Modifieds to post his first win in the Fall Championship event. When added to his two previous wins this season his $5110 victory took his race winning to over $13,000 this year!

Three cautions before the first lap of the 50 lap race was in the books got the race off to a rocky start. The first was brought out when Jamie Mills got around in turn three. Neal Williams, Kevin Sockriter and Scott Hulmes tangled on the next attempt and perennial favorite, Craig VonDohren slowed on the back straight with a flat tire to bring out the third before one lap was in the books.

When the first lap did get in it was Richland, Pa.’s Jared Umbenhauer, who was making his first start at DIS, in the lead. Ryan Watt bolted from his fifth starting spot into second and immediately began applying the pressure to the leader.

Watt proved to be too much for Umbenhauer taking the lead on lap six. Behind the lead duo a good battle was being waged by H.J. Bunting in third and Richie Pratt, Jr. in fourth, both of which are former Fall Championship winners in the Small Blocks.


Pratt got by Bunting on lap ten and Jordan Watson followed into third. Watt was showing a lot of confidence in his mount as he threaded the needle going three wide in lapped traffic.

VonDorhen was making his way back towards the front but there was some confusion as to whether or not he had gotten a lap down when he pitted with the flat. A post race evaluation found that he had indeed missed the first lap but his charge towards the front would prove to be profitable at the end.

A yellow on lap sixteen would tighten the field and lead to a long stretch of green that lasted until three laps to go. By that point, VonDohren had worked his way up to the leader but sparks started showering from his front brakes indicating a problem.

Watt remained smooth and quick and seemed intent on lapping the field. He may have come close to achieving that had Chuck Sayres not gotten around to bring out the final yellow with three to go. Watt had no problem handling the final circuits as he outdistanced Umbenhauer to the checkered.

“Man was that thing fast,” said a smiling Watt in Victory Lane. “Right from the beginning I knew we had a good car but every start there in the beginning kept getting called back. When Neal (Williams) went around in front of me – I don’t know how I missed that deal.”

Umbenhauer made his first Delaware start a good one finishing in second with Watson third. Mills and Pratt, Jr. got together in the final turn with Pratt getting around and Mills finishing fourth. VonDohren’s charge back through the field placed him as the first car that was one lap down, finishing fifth.

The combined Little Lincoln Vintage/Street Stock 12-lap championship was a highly competitive race from start to finish. Landy Adams started on the pole with Sparky White applying the pressure from second. Joe Tracy quickly moved from seventh to third, taking over second just before halfway.

Tracy battled with Adams for two laps before taking the lead as Kirk Lawson charged from the rear after a first lap tangle with the wall to take third. The lead trio ran nose-to-tail through the middle laps. With two to go Adams turned up the heat by moving to the high groove. Adams pulled even with Tracy going into the third turn on the final lap and won the drag race back to the checker by a fender for the win. Lawson finished in the third spot with Sparky White fourth. T.J. Henry finished first Street Stock in fifth. Lap money was sponsored by Mitchell’s Auto & Truck Salvage and Dorchester Lumber.

The “Pacman” made his first win in the Delmarva Chargers a very memorable one as he captured the 12-lap as he captured the Fall Delaware Dirt Track Championship for the division. Robert “Pacman” Paczkowski edged by former Fall champion, Ashley Merritt on the first lap and never looked back in the caution free race.

Joey Waters would get by Merritt just before halfway but the Pacman would make no mistakes as he drove to his first win in the division. “I was crying that lap after the checkered,” said the elated Paczkowski after his first win.

Things got off to a rough start in the 12-lap Super Truck championship. Mike Kennedy got around coming off the second turn and was tagged hard by David Shores. After the caution Kennedy was able to continue but Shores was done for the night.

David Smith took advantage of the restart and used the bottom groove to move to the front and take the lead for lap one. The race would go caution free from there on and the leader would never be challenged.

Dale Elliott held the second spot until Smith’s brother, Robert took over the spot. Robert was not able to run down the leader as David Smith drove to his second Fall Championship win. Jerry Hill finished in the third spot with Elliott fourth and Stanley Pete fifth. Lap leader bonus money was sponsored by First State Crane Services, Inc. 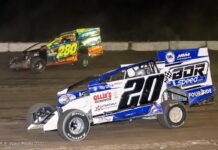