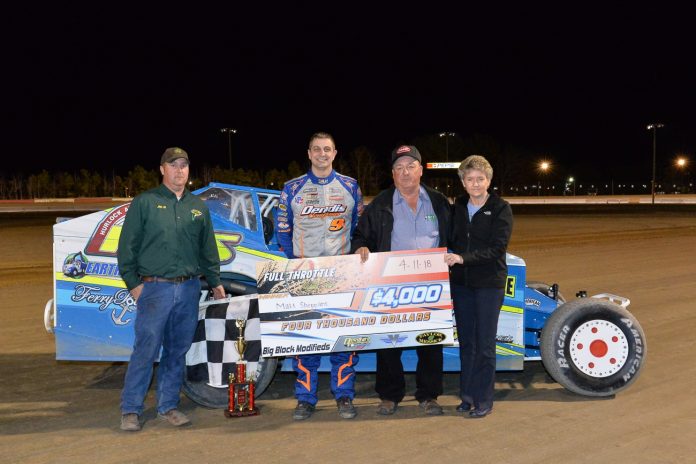 DELMAR, DE – The FULL THROTTLE SERIES Race # 1 officially got underway tonight at the Delaware International Speedway. The Taylor & Messick, 40 lap big block modified feature, had 34 Modifieds hitting the track for a spot in the lineup with $4000 on the line for the winner and $400 to take the green. In addition, there were lap bonuses included tonight.

Matt Sheppard 9S, of Waterloo, NY, stated, “the track was one of the best I’ve raced on there was a racing groove from the top to the bottom I could run anywhere I needed.”

Sheppard blazed the track flawlessly from the drop of the green to take the lead from Anthony Perrego 44, from the start. The first yellow came out with Scotty VanGorder stopping in turn 4. On the restart Sheppard, Perrego, Jamie Mills 30, Jimmy Horton 43H and Ryan Godown 66 were the top 5. Mills and Horton battled for third on the take off until lap 7, when local Jordan Watson 1J slows in turn 4 and he’s done for the night. Watson was plagued with mishap in hot laps with water pump woes but qualified in the consi to take the green in the feature.

By Lap 10, Godown charged Sheppard for the lead with some good old-fashioned side by side racing for a number of laps until lap 12 when Ryan Watt 14W slowed in turn 4 with a flat. On the restart, Godown, Sheppard, Perrego, Mills, and Craig VonDohren 14S were the leaders, with Sheppard retaking the lead by laps 14-15 in turn 2 setting up a 4 to 5 car length lead. The caution was back out on lap 20 when Horton slowed and Jeff Brown 9 went in the pits with a flat.

Sheppard remained the leader with a battle for third between Mills and Perrego in turns 1 and 2. Mills looked to drive down and the car just kicked out from under him bringing out the yellow on lap 25, when he hit the retainer wall just outside of turn 2. This ended the good run he had going. Sheppard leads Godown, Perrego, Pauch Jr. and Howard in the top 5 on the restart. Howard and Pauch Jr. made little contact, but the green remained out with 18 cars on the track.

Watt made his way through the pack to claim 11th after having a flat on lap 12. On Lap 28, Perrego and Howard battle for third until Perrego ends up taking second. Lap 32 Howard gets around in turn 4 by himself bringing out the caution. Lap 33 Sheppard leads, Godown, Perrego, Pauch, Jr., VonDohren, Laubach, Jim Britt 118, Watt and Mike Gular 2A rounded out the top 10. The final two laps had a showdown for third between Bunting and VonDohren and VonDohren pushed forward claiming third. The final top five was Sheppard, Godown, VonDohren, Bunting and Perrego.

Sixteen-year-old, Joe Toth 9, of Newtown, PA, wins the GM 602 Sportsman Modified 20 lap feature to pick up the $1000 check along with lap monies, $100 to take the green for all. Toth thanked his mom, dad, grand-dad and the rest of the family, then thanks his sponsor Sweetwater.

Toth started on the pole at the green, but yellow was out at the start when some cars tangled, then again, a couple times before the feature really got started. No laps were in for the first yellow, lineup was Toth, Matt Smith 97, Tom Moore, Jr. 59, Brad Roberts 123, and Stephen Kemery 69K. By lap 3, Dwayne Crockett 1RX grabs fourth, he also had the fastest lap in the feature with a 20.600 sec and 87.379 mph lap. David Graham 267 lost his rear bumper in the may lays of yellows and was black flagged for safety reasons. Lap 5 restarted with Crockett jumping into second before more cars brought out the yellow in turn 4.

At the halfway point, Toth lead Crockett, Erik Korman 16S, Jeremy Harrington 30J, Stephen Kemery 69K and Adam White 15. On the halfway restart, Korman doesn’t come up to speed dropping many positions ending up 6th for the night. On lap 17, White was turned around in 1 & 2, collecting Roberts, and Tommy Wilkins 5 ending the night for all three. A two-lap shoot-out in the end resulted in Toth, Crockett, Harrington, Kemery and Ryan Riddle 31 rounding out the top 5.

Matt White 15 started on the pole in the Little Lincoln feature, but got loose in turn 1 resulting in cars all over, but no one makes a complete stop. On original restart, Sparky White 16, was on the point followed by Bunky White 18, Joe Tracey 3 and Ryan Walsen 9. Bunky White takes the lead with Tracey claiming second, then Kirk Lawson X, and Jordan Herbert 47. Lawson moves into second over Bunky White around laps 7-8. The leader, Tracey, catches lap traffic on lap 9.   He led the rest of the way.

In the Sportsman, Charlie Moore 4 started on the point, but Andy Cassel 28C lead lap one. On lap 3, Cassel gets loose out of turn 4 on the front stretch allowing CJ Schirmer 23 to move into second. At lap 4, Cassel regained second by halfway then lead laps 7-8. Lap 9, the yellow flag waves for Josh Smith in turn 4. Restart was Cassel, Moore, Schirmer and Smith; Cassel moves back from first to third.