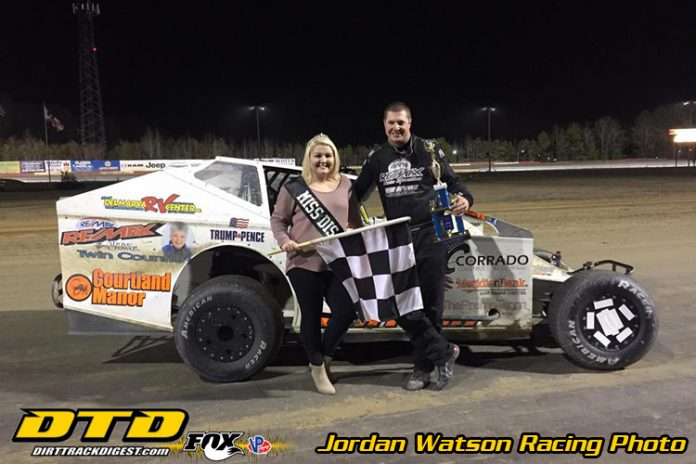 “When a guy like Ryan Watt is leading, you cannot show them your line before you know you can clear them. When I got under him, I knew I had to go,” said Watson in the Victory Graphic’s victory lane.

Ryan “The Electric Company” Watt who has dominated the northeast modified circuit looked to be unstoppable with his pole starting position. From the drop of the green, Watt was under pressure from Delaware regulars Jamie Mills, HJ Bunting, and Jordan Watson. The trio rushed into turn one, with Watson on the bottom, Bunting in the middle, and Mills on the outside rim of the small ½ mile. Mills cleared the duo on the backstretch temporarily, as Watson dove to the bottom of Mills entering turn three.

On the next circuit, Watson continued his tear and successfully passed race leader, Ryan Watt, exiting turn four. Jamie Mills followed in suit. The top three, Watson, Mills, and Watt equally spread out their distance from the remainder of the field. Mills continued to race the top-side of the speedway to inch closer to Watson.


By halfway, Watson had developed a half straightway lead over second place, Mills, and was approaching dense lap traffic. Watson strategically approached the lap traffic, as Watt had closed to the bumper of Mills. On lap 17, Watt passed Mills for second and had his sights on Watson.

On lap 21, Howard O’Neal spun in turns one and two, bringing out the first caution of the event and erased Watson’s 2.289 second lead over Watt.

On the single-file restart, Watson controlled the race and precisely managed the slick race surface for the final four circuits. Watt, Mills, a hard-charging Brad Trice, and HJ Bunting rounded out the top five.

Heats were won by Bunting, Mills, and Watt.

Greg Humlhanz secured his driving duties in the George Tubb’s- owned No. 10 AC Delco Crate Modified, as he visited victory lane on his first time driving the car. Humlhanz survived nearly 10 caution-flags and a race that ultimately went single-file on only lap three.

On lap seven, Trent VanVorst experienced a vicious flip down the front stretch. The driver was declared okay.

Heats were won by Jason Rush, Humlhanz, and Matt Smith

For the season opening event, all Delmar residence received free general admission. Rain was in the forecast late in the event. The final checkered flag waved as the sprinkles started.

With no point averages, drivers drew for their heat race starting position. The feature line-up was heads up, with the fastest lap in the heat race earning the priority position. Watt, Bunting, and Mills were the top three.

With rain in the northeast and the upcoming Short Track Super Series event at Delaware International on May 24th, a few invaders joined the field, including, Ryan Watt, Richie Pratt Jr., and Jim Britt.

Brandon Watkins, in his third season in the Big Block Modified was impressive, finishing sixth, and highly competitive in his qualifying event. He is one of the multiple father/son duo’s at Delaware International.

NEW CAR, SAME RICKY ELLIOTT, IN JAKE MARINE- OWNED SUPER LATE MODEL
Ricky Elliott is no foreigner to victory lane at Delaware International Speedway. This Saturday, Elliott debuted the No. 85, Jake Marine-owned Super Late Model and headed straight to victory lane. Jake Marine, a long-time owner in Delaware modified racing offered to fund Elliott’s Super Late Model after announcing his retirement at the end of the 2017 season in his personally-owned No. 88.

“This is my first time ever racing a Ford motor,” said Elliott in victory lane. “I just can’t thank Jake Marine enough. He owns the car and I maintain it.”

Elliott captured the 20-lap feature event with ease, with the help of his pole sitting starting spot. Predominantly, the racing action was behind him, as Amanda Whaley, Ross Robinson, Donald Lingo Jr., and Nick Davis fought tooth and nail for the top five positions throughout the event.

Amanda Whaley, fresh off her RUSH Late Model “Battle of the Bay” success, had to earn the second-place position three times with first lap cautions. By lap five, Elliott had extended his lead with Whaley, Lingo Jr., Robinson, and Davis rounding out the top five.

On lap 10, fourth place runner, Donald Lingo Jr., spun in the center of turns three and four. On the single-file restart, Lingo Jr., powered from the tail end of the longest line and had returned to sixth in a single lap.

The resurgence of Lingo Jr., set-up for a three-car battle for the third position between Robinson, Davis, and Lingo Jr.

Elliott crossed the finish-line with ease, leading all 20 circuits, with Whaley settling in for a comfortable second-place finish, followed by Robinson, Lingo Jr., and Davis rounding out the top five.

Heats were won by Elliott and Lingo Jr.

Zac Weller led wire-to-wire to capture the 15-lap RUSH Late Model feature event. The attention was directed to the battle for second as Matt Hill and Sparky White battled door to door for majority of the event. Matt Hill was fast on the top of the race track, with White smooth on the bottom.

The only real threat Weller had was a lap nine restart when Hill charged around the top in turns one and two. Weller was able to maintain the lead and capture the first checkered flag of the season. Hill, White, Joe Warren, and Billy Thompson rounded out the top five.
Heats were won by Weller and defending track champion, Joe Warren.

Ross Robinson took the honor of filling in for Mark “Coot” Williams in the Vintage Modified series, as Williams continues to battle a health condition. With Robinson and Williams being family members and influential in each other’s racing careers, the choice was easy. Williams dominated the Street Stock division throughout his career in the late Bill Lawson’s ASI No. 26. Jamie Eicholz won the Vintage Sportsman division.