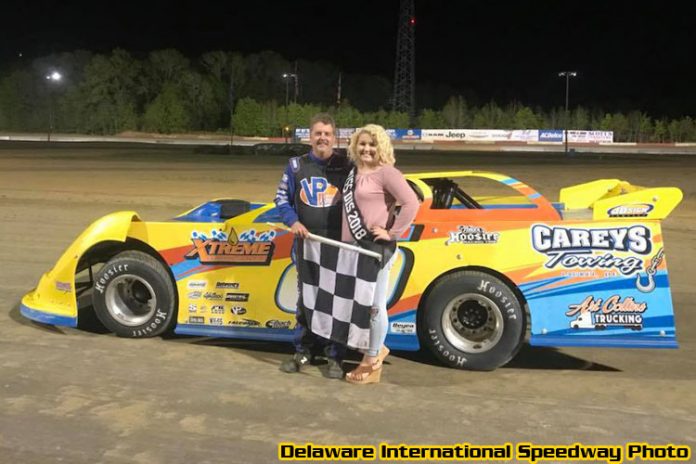 DELMAR, DE – Ricky Elliott continued his triumph of success, winning the 25-lap William J. and Juanita Cathell, $2000 to win, Super Late Model feature event. “I did not want to push a bad move. The bottom was dominant,” as Elliott had to negotiate heavy lap traffic and a charging Dale Hollidge in the closing laps.

Elliott started from the pole position and quickly took control of the main event with Jamie Lathroum and Dale Hollidge battling for the second position. The field was regrouped early, as Gumboro, Delaware’s Nick Davis suffered significant front-end damage and slowed in turns one and two.

It was Millsboro’s, Donald Lingo, Jr., who was making headway and breaking into the top-five by lap four after starting deep in the field.


On the restart Elliott continued to pull away, as Hollidge solidified the second place spot over Lathroum. Kyle Lear now had his sights on Lingo for the fourth position.

By halfway, Elliott began hitting heavy lap traffic. Patience was of a virtue, as Elliott used his experience to carefully navigate the lap traffic, with Hollidge closing in quickly. Elliott edged out Hollidge to the checkered flag, followed by Lathroum, Lear, and Lingo, Jr.

Heats were won by Elliott and Hollidge.

Amanda Whaley changed her luck after suffering significant damage in the super late model division, to lead all 20-laps of the RUSH Late Model feature event. Amanda was the lone racer who performed “double-duty,” racing in both the super and crate late model divisions.

Sparky White immediately put the pressure on Billy Thompson for the second position, battling side by side until two to go, when White ultimately secured the position. Jimmy Jesmer, Jr. and Joe Warren rounded out the top five.

Notably, Georgetown Speedway’s Friday night RUSH feature winner, Matt Hill, who calls Delaware International home, was not present for the event. Hill was covering the family business as his father recovers from surgery.

Kirk Lawson quickly changed from tuxedo to fire suit after celebrating a family and crew members wedding on Saturday night. Lawson took the early lead and uniquely drove the low-side of the entire ½ mile to hold off Joe Tracey. 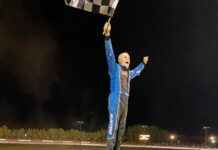