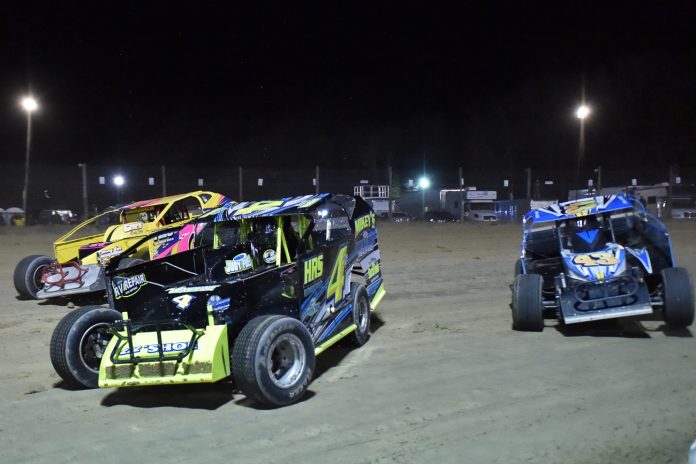 DELMAR, DE – Bobby “The Shoe” Watkins returned to Delaware victory lane in dominating fashion on Saturday night. The veteran modified driver won his heat race and started on the pole according to the points system.

Watkins would not go unchallenged, as Robert Dutton immediately put pressure on Watkins for the lead by lap two. Dutton would lead one circuit until Watkins charged back to the lead.

On lap four, the caution waved for Howard O’Neal who spun coming out of turn four. Unfortunately, the spin collected Scott Hitchens who was borrowing Brian Hitz’s machine after motor failure in the qualifying event. The No. 32H slowly rolled onto the roof.
Notably, by lap four, Brad Trice had worked himself to the fourth position after starting 10th.

On the restart, Watkins maintained the lead with Scott VanGorder closing in on the top-side of the track.

On the next start, Trice and VanGorder dueled for the second position, with Ryan Watt running the high line entering the top five.

Watkins and Trice filed away from the field, as VanGorder and Dutton battled for the third position and Joseph Watson began challenging Watt for fifth.

By halfway, Joseph Watson and brother Jordan split Jordn Justice for sixth on the backstretch. Older brother, Jordan, went to work on Watt and Dutton for fourth.
With five to go, Watkins began hitting lap traffic. Jordan Watson had reeled in Trice, with Jim Britt passing Watt for fourth.

Watkins would successfully navigate the heavy lap traffic to win his first feature event since 2016. Trice would continue his consistent season in second, with Jordan Watson, Britt, and Watt rounding out the top five.

James Hill took the lead on lap two of the Modified Lite event and took the Walt Breeding tribute No.1 car to victory lane. Walt Breeding recently passed away after a long battle with cancer. Breeding was a significant innovator and supporter of Delaware dirt track racing.
Chris “Tippy” Martinez led wire to wire to bring home his first career win in the Delmarva Chargers division.

Strong storms approached the area prior to the completion of the feature events. The Super Late Model, RUSH Late Model, and AC Delco Crate Modified events will be made up at a later date.