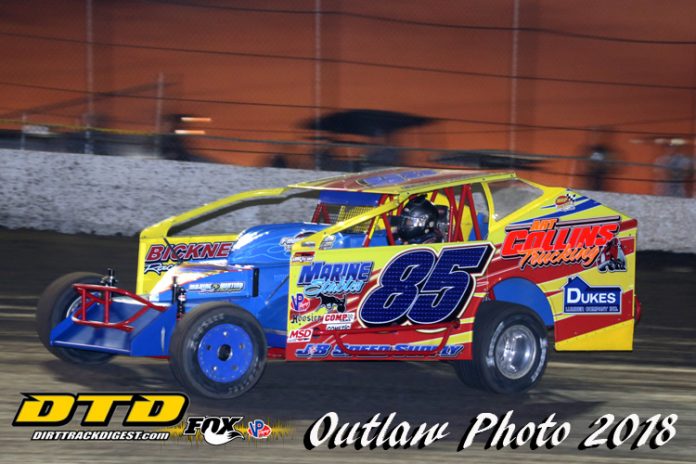 “I was committed to the high line and he (Joseph Watson) came up on my nose. I’m sorry for it, but I was there,” said Bunting in victory lane regarding the lap two incident.
Howard O’Neal started on the pole position but was quickly being challenged by the dueling battle of Joseph Watson and Bunting.

By lap two, Joseph Watson was on inside of Bunting on the backstretch battling for the lead when Joseph Watson and Bunting made contact. Joseph Watson immediately was directed head on into the backstretch wall with a full field speeding off the second corner.
Jordan Watson, Brad Trice, Shawn Ward, and Bobby Watkins were quickly engulfed into the incident with Trice rolling multiple times, Ward ending on his side, Watkins with a destroyed rear end, and Jordan Watson with a mangled racecar. All drivers were okay from the vicious wreck.

After a brief delay to clear the carnage, Bunting set pace over Richie Pratt, Jr., O’Neal, and a battling Robert Dutton and Jim Britt.

Only one additional caution would fly in the event, with Kevin Sockriter spinning on lap nine.

On the restart, Britt began challenging Pratt for second, with O’Neal and Matt Hawkins racing side by side for fourth.

On lap 17, O’Neal and Hawkins touched on the back stretch, with Hawkins making a quick right-hand turn into the pits.

Jordan Watson was the only car involved in the lap two incident that was able to continue and salvaged a seventh-place finish with extensive body damage.

With a month full of rain, no weekly racing, and the highly anticipated Camp Barnes event slated for the upcoming week, a full field of modifieds were on hand, including many invaders from the New Jersey area.

Uniquely, the weather and schedules have allowed drivers like Jim Britt to compete at all points events at Delaware International and Bridgeport Speedway this season. Next Saturday is scheduled to be the first conflicting event, where Britt will need to decide where he will continue his championship hopes; Delaware or New Jersey.

The AC Delco Crate Modified division was busy, as they had a double header, making up a previous event that was rained out.

Dwayne Crockett had the highest average of the two events, with an average finish of 1.5, with a victory and second place finish.

The first feature event had Matt Smith taking the lead on lap four, with a hard charging Crockett, Ryan Riddle, and Greg Humlhanz from mid-pack.

With two laps remaining, Crockett got underneath Smith and completed the pass for the lead. Humlhanz, Riddle, and Adam White would round out the top five respectively.
For the second AC Delco Crate Modified feature event, it would be déjà vu for the front runners, with ultimately Humlhanz, Crockett, Riddle, White, and Danny Smack finishing in the top five.

Jason Rush was the offender of jumping the start twice in the beginning of the event and being penalized to the rear of the field. Young, Sean Metz would maintain the lead for the first seven circuits, until Humlhanz went three-wide with Trent VanVorst for the top position.

Humlhanz maintained command of the race to capture his second victory of the season.

DELMAR, DE- Dylan “The Millsboro Missile” Evans was stout all Saturday night, having the fast time in hot laps, winning his heat race, and being victorious in the 20-lap feature event.

Evans jumped to an early lead from the third position, utilizing the Delaware start technique and being on the outside. Kevin Scott, Jr., quickly followed in pursuit with Nick Davis. The battle was for the top-five, as Ricky Elliott, Amanda Whaley, and Donald Lingo, Jr., were three-wide for position.

Lingo would ultimately take the fourth position and set his sights on Davis for third. Elliott would continue to be crowded by Whaley and hard charging Mark Pettyjohn.

Davis continued to hammer the high line of the slick race track and slowly began losing positions to drivers “bottom feeding” on the ½ mile.

With two to go, Davis spun in turns three and four, waving the first caution of the event and erasing Evans’ nearly three second advantage.

On the restart, Lingo and Elliott pounced on Scott, taking the second and third position.
Evans would have a clear view, as he held off veteran drivers, Lingo and Elliott for his first Super Late Model feature event win of the season. Mark Pettyjohn spun coming for the checkered flag, collecting Kevin Scott, Jr. Amanda Whaley and Kerry King rounded out the top five.

In victory lane, Evans stated, “We had a good care all night. It is good to be back!”
Billy Thompson won the 20-lap RUSH Crate Late Model Delaware State Championship Qualifier, earning a guaranteed starting position for the Fall event.

It was three-wide at the drop of the green flag with Billy Thompson and Jimmy Jesmer assaulting pole sitter Joe Pete for the top position. Thompson won the battle but would find competition in hard-charging Matt Hill, Jesmer, and Brandon Sturgis.

Hill began exploring the top-side of the slick racing surface and could not make it work, dropping many positions in the closing laps of the event.

Billy Thompson would drive a flawless race to win the Elliott Farms night, with Jesmer, Sturgis, Warren, and White rounding out the top five. Noteworthy, Derek Magee just missed the top five, as he challenged Warren and White side by side in the closing laps.

James Hill would continue his winning ways, as he defeated the Modified Lite competitors, with a commanding lead of nearly two seconds over Jake Nelson, Aaron VanVorst, Jerry Barker, and Tim White.

Joe Tracey was able to withstand many restarts to drive a perfect race and capture the Little Lincoln feature event. With a last lap restart, Tracey held off hard charging Jordan Herbert and Kirk Lawson who battled door to door for the second position. Ryan Walsen and Wayne Seaton rounded out the top five.