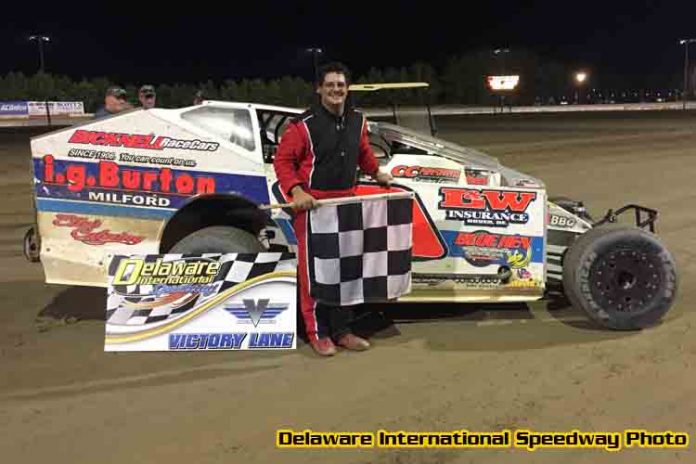 “This has been one of the toughest years for our race team,” exclaimed Watson in victory lane.

Howard O’Neal took advantage of the pole position and set a controlling lead from the start of the race. Behind O’Neal, Scott VanGorder, Joseph Watson, and Brad Trice would all fight for the runner-up position.


A late race caution would set up a single-file restart. On the restart, Joseph Watson would go to the top of turns one and two, with O’Neal sliding up in front of Joseph Watson. Jordan Watson would dive to the bottom of Trice for the third position.

Joseph Watson would continue to be on the rear bumper of O’Neal, waiting for the perfect timing to pounce. With two laps remaining, O’Neal slid in front of Joseph Watson in turns three and four, the two touched, with Joseph Watson able to complete the pass coming out of turn four.

Watson would secure the top position and drive to his first win of the 2018 season. O’Neal, Jordan Watson, VanGorder, and Trice would round out the top five.

For the second Twin 20 event, all cars on the lead lap of the first event would be completely inverted, with the first feature winner starting in the 16th position. The invert would set-up for side-by-side racing throughout the entire field as top-runners from the first feature were furiously trying to get to the front of the pack in 20 laps.

Dale Hawkins would set the early lead, with Robert Dutton following in suit, using the back-up car of Scott VanGorder.

Deep in the field, Trice, Jordan and Joseph Watson, and Jim Britt were scouring for positions to try and crack the top ten.

On lap eight, contact between Kyle Fuller and Britt on front stretch brought out the caution flag. On the restart, Richie Pratt, Jr., Dutton, Bobby Watkins, and Jordan Watson went four-wide, with Pratt charging into the second position.

Another caution flag would wave with Scott VanGorder slowing. A single-file restart would occur, as the event was over halfway. On the restart, Dutton went to the bottom of Hawkins in turns one and two with Pratt to the top of the speedway. In turns three and four, Pratt would carry enough momentum to pass Hawkins for the lead. Dutton and Jordan Watson would try to capitalize on the action, taking the second and third position from Hawkins.

Pratt would begin to stretch his lead, with Jordan Watson passing Dutton for second. For the last four laps, Jordan Watson would try to reel in Pratt, coming within car links in the final corner.

Pratt would be able to hold off the challenges, winning his first feature event of the 2018 season. Jordan Watson, Dutton, Trice, and Joseph Watson would round out the top five, respectively.

“I’m glad it was just 20 laps,” said Pratt in victory lane, referencing motor and fuel pressure issues throughout the night.

On laps six and seven, top runners, VanVorst and White would both spin in separate incidents, bringing out the caution flag.

Humlhanz would remain unchallenged as Dwayne Crockett and Trent Willey would drag race for consecutive laps, with Crockett ultimately earning the second position. Willey, Rodney Cordrey, and “Mr. Consistent,” Ryan Riddle would round out the top five.

Hometown driver and typical Super Late Model driver, Kerry King, took advantage of the Super Late Models not being scheduled for this weekends event and took the win in the

“These crate drivers are fun to race with,” said King in victory lane. “It is a good feeling to be able to come to the races with my family and not have to spend a lot of money with this crate series.”

King would have to work for his victory, as Charles Shawver and Jimmy Jesmer, Jr., battled side-by-side for the first seven circuits for the top position. On lap seven, Jesmer’s competitive run would come to an end, as he was involved in a multi-car accident in turns one and two.

The restart would be single-file, with King diving to the bottom of Shawver for the lead on lap nine. A few circuits later, Shawver would spin, removing himself from contention for the win.

Another late race caution would set-up for a green, white, checkered finish with King holding off the strong charges of Matt Hill, Billy Thompson, Amanda Whaley, and Sparky White.

James Hill continued his dominating fashion in the Modified Lite division, taking the lead from Tim White. There would be multiple cautions to regroup the field, but none could compete with the strength of Hill. Tim White, Aaron VanVorst, Curt Miles, Jr., and Wesley Smack rounded out the top five.