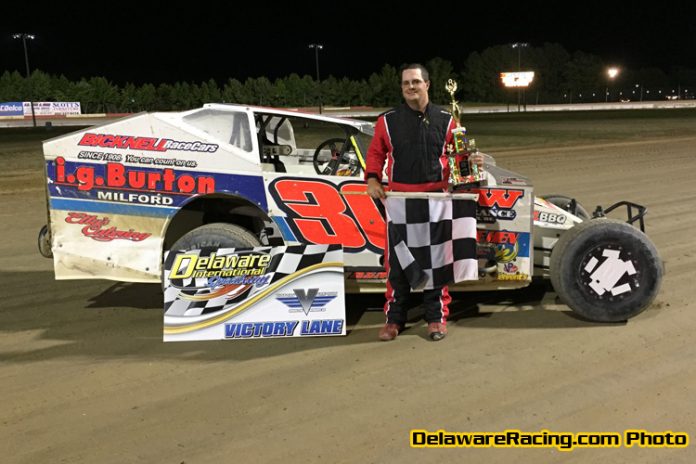 DELMAR, DE – Joseph Watson captured the 30-lap Dirt Track Championship Qualifier, earning his second win of the season, and a guaranteed starting position in the Fall event. “We had the car just about perfect tonight,” said Watson in victory lane.

Kyle Fuller would lead the field from the pole position with Matt Hawkins and Joseph Watson quickly securing the second and third positions. A lap four caution would wave for a slowing Bobby Watkins.

On the next restart, Wesley Smith and Kevin Sockriter would hook, with Sockriter spinning. Smith would never stop and return to his position.

On the fifth circuit, Joseph Watson went to the top of turns one and two to pass Fuller for the lead. Hawkins and Jordan Watson followed in suit, shoveling Fuller to the fourth position.


Hawkins would continue to show his muscle, keeping the pressure on the leader and protecting his second position from the Watson duo.

By lap 17, Joseph Watson continued to set the pace, with Hawkins rim-riding the top of the racetrack. Hawkins would hang his right rear off the top just enough that Jordan Watson could make the pass for the second position. Hawkins would charge back in turns three and four but could not regain the position.

On lap 22, the caution flag waved with Scott VanGorder coming to a stop with a flat left rear tire.

The caution would erase Joseph Watson’s 2.5 second lead and set up for a single-file restart. On the restart, a chain reaction would happen throughout the field with ultimately the middle of the field slowing on the front stretch, bringing out a caution for no-start.

Greg Humlhanz continued his winning ways, capturing his fourth AC Delco Crate Modified feature event in the George Tubbs No. 10 machine. John Stevenson would start in the pole position and prove to be tough competition, as Humlhanz did not complete the pass for the lead until four laps remaining in the event. Stevenson maintained his strong momentum on the top of the racetrack, as Humlhanz remained patient on the bottom. Stevenson would come home second with Trent Willey driving through the field for third, Jason Rush and Adam White would round out the top five.

Tim White would take the early lead from Wesley Smack and develop a 1.6 second lead. A late race caution would erase White’s lead, putting James Hill in striking distance. With three laps remaining, Hill went to the bottom of White in turns three and four, making contact. Hill would take over the top position, with White, Aaron VanVorst, Jerry Barker, and Smack rounding out the top five.