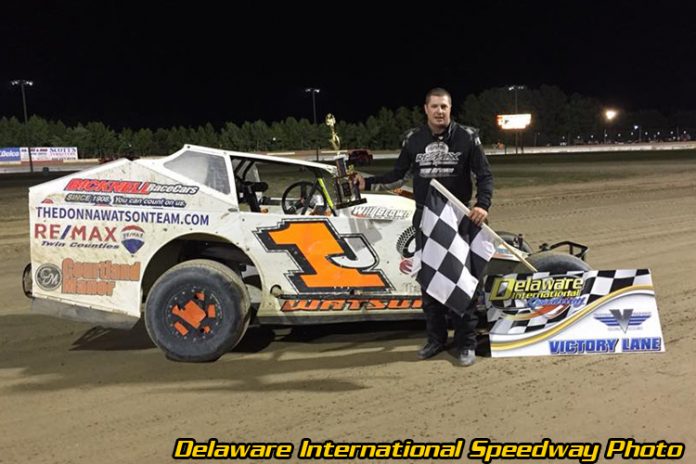 Jordan, who has been defeated by younger brother, Joseph, the last two events laughed in victory lane, “This week he (Joseph) will be scooping me ice cream,” as the friendly competition has carried over into Sunday night family dinner responsibilities.

It was the father and son combination of Dale and Matt Hawkins who jumped to early control of the main event, with father, Dale, stretching out a nearly straightaway lead by halfway.

Jordan Watson had navigated from mid-pack to challenge M. Hawkins for the second position, completing the pass on lap 16.


With less than 10 laps to go, Watson went to work on finding the fastest groove on the speedway and manipulating lapped traffic to overcome the deficit.

With five laps remaining, Watson had raced to the rear bumper of D. Hawkins, diving to the bottom of the racetrack in turns one and two to dethrone D. Hawkins from the top position.
Jordan Watson would take the checkered over D. Hawkins, Joseph Watson, Matt Hawkins, and Jim Britt.

“We have been struggling when the track gets some bite in it, but we made an adjustment tonight that I think we can fine-tune and be in good shape,” said Watson in victory lane.

Greg Humlhanz continued his dominating season in the AC Delco Crate Modified division, capturing his fifth victory of the season. It was Trent Willey who appeared to be a contender to overcome Humlhanz, who began gradually slowing with mechanical issues as the race progressed. Humlhanz ultimately passed Willey with three laps remaining to collect the win. Willey, David Jenkins, Jason Rush, and Adam White rounded out the top five.