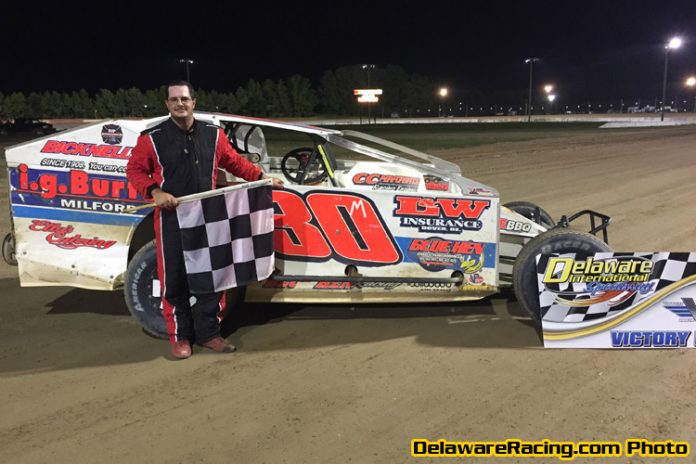 DELMAR, DE – Joseph Watson rebounds from qualifying woes to win his fourth Hurlock Auto and Speed Big Block Modified feature of the year. “I was praying we had everything on the front end tight. It looked like a war wagon out here,” said Watson in victory lane.

Carson Wright started on the pole position, taking a commanding lead on the field utilizing the topside of the racing surface. A lap 11 restart put the season’s winningest driver, Joseph Watson on Wright’s heels, after starting in the 17th position.

Watson patiently peeked to the bottom of Wright for five laps, with Wright maintaining the faster line off the top. On lap 17, Watson finally completed the pass out of turn four for the lead.

Noteworthy was Jordn Justice who suffered mechanical failures on lap 22 while running a competitive third position.

LINGO DOUBLES DOWN FOR BACK TO BACK WINS

Delmar, DE- Donald Lingo, Jr. proved to be a top-contender in the S.R. Pete & Son Super Late Models, as he collected his third victory of the season, in similar fashion to last week. “Everybody has the best of the best! We have not been this good in a long while. It feels like the old days,” said an excited Lingo in victory lane.

It was déjà vu as Kerry King led the field to the green flag of the 25-lap Super Late Model qualifier, with Amanda Whaley and Ross Robinson fighting to get to the front first. The two swapped positioned and the anticipated slide job, as they cleared King by lap two. It was Whaley and Robinson who swapped the top position for the next three laps.

On lap six, similarly to last week, Lingo, Jr., dove to the bottom of Whaley and Robinson, powering to the top position discreetly.

A single-file restart on lap 15 would allow for Elliott to crank it up on the outside of Whaley to take over the second position. A lap later, Whaley slowed with mechanical issues.

Lingo would stretch out a nearly half straightway lead with their family-built motor over Elliott, Mark Pettyjohn, Robinson, and Nick Davis.