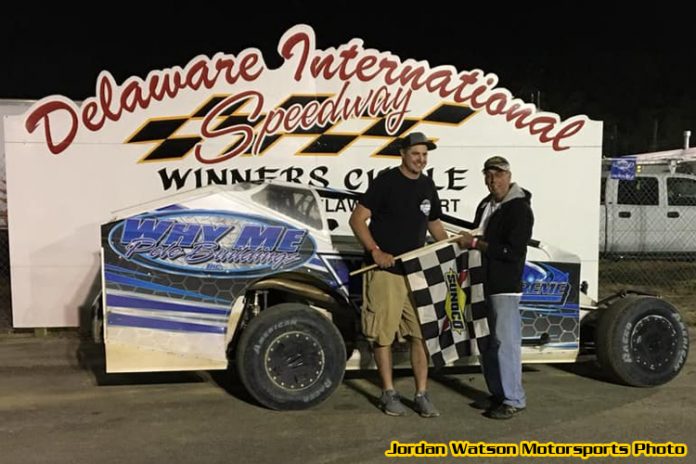 DELMAR, DE – Jordan Watson stunned the field behind the wheel of Jake Marine’s No. 58, winning his third feature event of the season and clinching his second Big Block Modified Championship at Delaware International Speedway.

“That was fun,” said an ecstatic Watson in victory lane. Watson who started the feature in the ninth position, worked the bottom of the racing surface to pick off each competitor, ultimately taking the lead from Brandon Watkins on lap 10.

“This car would go wherever I put it tonight. We raced it last week at Georgetown (Del.) and realized there were quite a few things on the car we needed to change to get me more comfortable in the car.”

It was evident that Watson was comfortable and the combination was perfect, as Watson stretched out a nearly straightaway lead by lap 15, with young-racers, Brandon Watkins and Jordn Justice battling side by side for the second position.


A lap 20 caution would regroup the field as the leaders were hitting dense lap traffic. Watson would remain unchallenged with Justice, Watkins, Scott VanGorder, and Kevin Sockriter rounding out the top five.

Watson entered the night, just 30 points ahead of his brother, Joseph Watson, who has been red-hot all summer long, crediting four wins to his name. A few weeks ago, Jordan Watson lost his primary motor in his family-owned No. 1J. Jake Marine and Brent Hall graciously offered Jordan Watson the steering wheel to their modified that had been piloted on a part-time basis by Ricky Elliott.

“I was lucky enough to get offered this ride. We race as a family and it really takes a team effort to get a winning combination. I do not know what next year’s plans are, but I hope I’m the lucky guy that gets to drive this thing,” said Watson in victory lane.

Dwayne Crockett was on a rail, taking the lead on lap five in the 20-lap Crate Modified feature event, holding off several late race restarts. Greg Humlhanz, who has had a dominating season, finished second and captured the points championship. Trent VanVorst, Ryan Riddle, and Rodney Cordrey completed the top five.