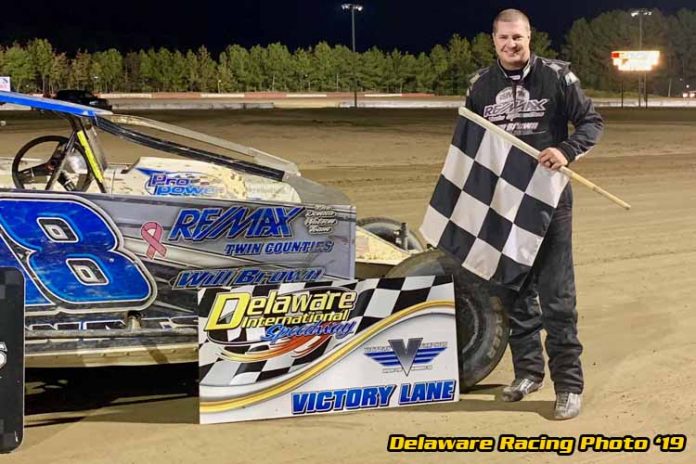 DELMAR, DE – Jordan Watson blistered the field from his sixth place starting position to earn his eighth win of the season at Delaware International Speedway in the Hurlock Auto and Speed Big Block Modified feature.

“I cannot say more about this team we put together. We are gelling and it is obvious,” said an elated Watson following the victory. “I have dreamed of having a season like this, so now that all the pieces are fitting together, we are going to enjoy it!”

Scott VanGorder redrew the pole position, with the top two from each of the three heats races redrawing. The battle was on as the top six swarmed the leader at the drop of the green. A quick caution for Shawn Ward spinning would allow for an original start.

On the next start, contact was made between HJ Bunting and Craig Moore, requiring Bunting to pit for repairs.

A third attempt at completing a single lap would see Watson stick to the bottom of the speedway and launch from sixth to first throughout the circuit.


Misfortune would arise for VanGorder by lap eight, who slowed with mechanical issues.

Craig Moore was impressive in his rare appearance in the Big Block division, winning his heat race. Moore ultimately succumbed to mechanical issues on lap ten.

Matt Hawkins took a wild ride in the heat event, rolling his No. 38 machine twice. The damages were too severe to compete in the feature event.

The Blue Hen Speed team suffered engine problems in both of their entries of Joseph Watson and Jeremy Harrington.

Mark Pettyjohn made it to the checkered flag in a nick of time, as the left rear tire was flat as he pulled the classic “8 Ball” to victory lane in the S.R. Pete and Sons Super Late Model feature event.

At the start of the event, current points leader, Donald Lingo, Jr., spun in turns three and four, with the field miraculously missing the No. 55L machine.

On lap two, Amanda Whaley and Nick Davis made contact on the front stretch, allowing Herb Tunis to capitalize and take over the lead position.

By lap six, Pettyjohn was challenging Tunis for lead, eventually completing the pass on lap 14, with Tunis slowing a short time later.

Lingo would rebound from his early woes, beating Whaley, Roy Deese, Jr., and Kellie Lewis to the line. There will be one event remaining to crown the points champion, in an epic battle of Millsboro natives, Lingo and Whaley, whose shops are a few short miles of each other.

Matt Hill added another victory to his resume in the RUSH Late Model feature event, earning win number nine at Delaware International for the season.

On lap two, Hill and Sparky White made contact, with Hill nearly spinning and requiring White to pit with a flat tire.

Joey Warren would take the lead from Brandon Sturgis on lap six, with Hill challenging on the top groove of the speedway.

A single-file restart would regroup the field with five laps remaining. Warren and Hill made contact coming out of turn two with Tyler Reed taking the lead briefly. Hill would regroup and take the lead on lap 12.

A late race caution would allow Mike White’s son, Adam, to also set his sights on Hitchens, as they drag raced to the finish.

A 50-dollar bonus was awarded to the first finishing car to support breast cancer awareness by Why Not Travel of Carolyn Parsons. The recipients were Jordan Watson, Kellie Lewis, Derek Magee, Mike White, and Ray Gulliver.

The final points event will be this upcoming Saturday night, celebrating the champions of 2019. 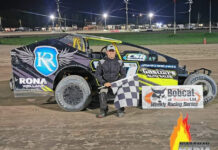 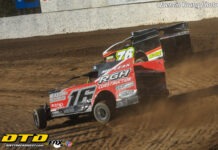 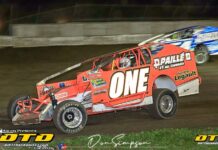