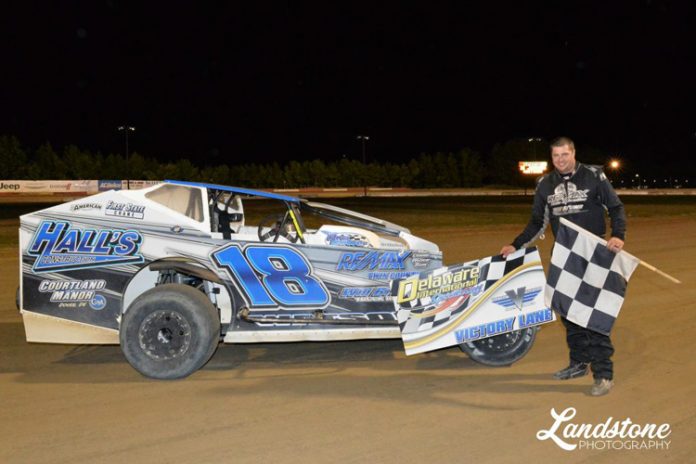 DELMAR, DE – It was the Veteran and infamous “Quiet Riot” HJ Bunting that brought the Hurlock Auto & Speed Big Block Modifieds to the green for their 25 Lap Feature event on Saturday Night.

Bunting would jet out to a small lead, but immediately felt pressure from the hottest driver in the Northeast, Jordan Watson. Watson, would make quick work of Bunting, and looked to check out again as he has so many times this year, but the envious yellow flag would fly from “honorary” flagman of the night, ESPN & FS1 announcer, Fabian Brown when Craig Moore was facing the wrong direction in turn four.

The field would gather itself back together, and once green flag action returned Watson began to check out. The best battle throughout the field would be for the third spot between recent “retiree” “The Rocket” Ricky Elliott and “Struttin” Robert Dutton. Elliott would work his way past Dutton, and just as they past the flag stand the 2T of Clay Tatman came to a stop in turn four bringing out the caution once again.

The field would once again tighten up, and this time Elliott and Bunting would stay close to Watson when they returned to green flag action. Elliott would battle with Bunting and worked his way into the second position on lap 14, and would begin to real in Watson until the caution flag once again flew on lap 15 for the collision of Clay Tatman and Jordn Justice.

It was 10 to go when the field came back under green, and Watson laid down on the loud pedal and tried his best to put distance between him and the 12K machine of Ricky Elliott. Elliott would fall back, but by lap 18 had worked his way back to Watson’s quarter panel.

The pair would work side by side in all three grooves of the super fast and racy Charlie Cathell special surface, with Elliott working past Watson as they came off turn four on lap 20. However, the caution would fly for Brad Trice who had stopped on the back straightaway just as Elliott inherited the lead. It was five to go when Watson came past the flag stand, but “The Rocket” gave up no space on this restart, and they were nose to tail when they crossed for lap 21.

Three to go and Elliott is searching for any real estate to work past Watson for the lead, but time was winding down. The Hot Shoe of Watson would continue to hold off Elliott for the remaining laps and grabbed another checkered flag and gave the fans one of the most exciting feature races of the 2019 season!

Herb Tunis was fast from the minute he unloaded at Delaware International on Saturday night, and he would continue his quick ways when he lead the S.R. Pete & Sons Super Late Models to the green flag for their 20 lap feature event. Tunis would begin pulling away and running down lap traffic by lap five and it was Roy Deese Jr in tow behind him when the lap traffic began to be an issue. Deese would stick a nose under Tunis when the pair tried to lap the 88k of Kellie Lewis, and disaster almost struck for the leaders when Lewis’ machine lost power at the same time. The field would regroup and Tunis & Deese Jr pulled away, but the fierce battle was for the third position between Kevin Scott Jr, Donald Lingo Jr, and Amanda Whaley. Whaley would sling her XR1 Rocket chassis down into turn three under the machine of Scott Jr and made it stick to grab the position just before the caution flag flew for the 24 of David Dill Jr. Whaley would work past the second place car of Roy Deese Jr on lap 10, but her momentum would once again slow when the caution flew on lap 11 as Nick Davis got around after contact with Mark Pettyjohn. On the restart it was Whaley who would work past the machine of Tunis with Tunis showing signs of trouble and eventually pulling in with smoke billowing from the machine on lap 15. Whaley would begin trying to stay smooth and steady once out front, but fear would always lerk in the back of her mind. The white flag flew and Whaley would continue to work through lap traffic as she came around for the checkered flag on the 20 lap SR Pete & Sons feature event and by doing so picked up the 2019 Championship by 10 points!