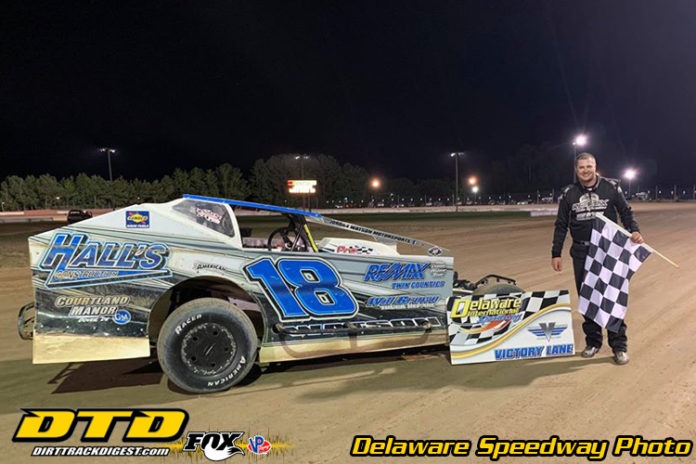 “We have had a long few weeks in the shop trying to repair our cars and get them race ready. It takes a team and a lot of sacrifice, so I thank everyone who has stuck with us,” said Watson in victory lane.

Jordan Watson immediately dove to the bottom of polesitter Brandon Watkins at the drop of the green and completed the pass for the lead by the end of the first circuit. HJ Bunting followed in suit with Ryan Watt peeking into the top five on the topside of the ½ mile.

By lap 10, Watson had extended his lead to nearly five seconds when the caution flag waved for a slowing Brandon Watkins.

On the restart, Watt pounced on Bunting for second, with a three-wide battle between Joseph Watson, Carson Wright, and Bunting for third.

With five laps remaining, Joseph Watson had reeled in second place of Watt. The two battled door to door for the remaining laps with Joseph Watson beating Watt to the line for second. HJ Bunting and Carson Wright would round out the top five.

Donald Lingo, Jr. would be victorious in the 25-lap, $2000 to win Super Late Model event. Lingo swept by Nick Davis on the top groove of the speedway by lap two and cruised to his second victory of the season. Amanda Robinson attempted to close the gap, but settled for second with Mark Pettyjohn, Nick Davis, and Kevin Scott, Jr. rounding out the top five.

Derek Magee impressively defeated one of the winningest RUSH Late Model competitors, Matt Hill, to capture the 15- lap feature event. Magee put constant pressure on the polesitter of Hill and ultimately completed the pass for the lead at halfway. Hill would try to pull out all the stops but could not overcome the strength of Magee, with Kerry King ultimately sliding into the second position. Hill, Austin Hubbard, and Zac Weller completed the top five.