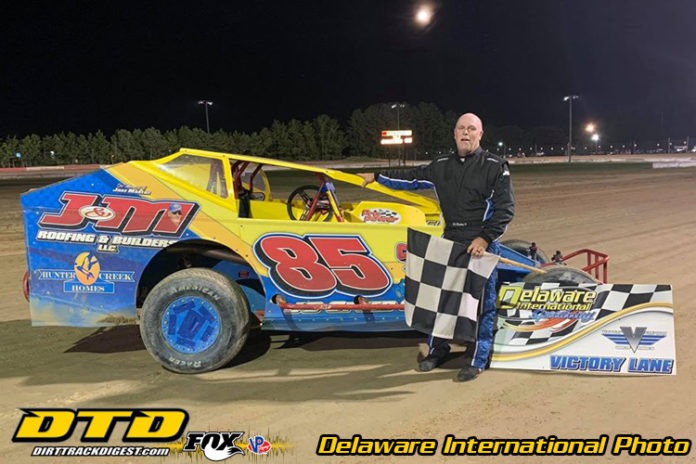 DELMAR, DE – Delmar, Delaware- HJ Bunting put the famed No. 85 in victory lane on Saturday night, leading wire to wire to capture the 25-lap Big Block Modified feature event. It was an emotional win with the recent passing of long-time Delaware racing supporter and car owner, Jake Marine, over the off-season.

At the drop of the green flag, the Watson brothers pounced on Bunting, with Joseph to the bottom and Jordan to the top. It was Bunting who set a blistering pace, driving the fast-paced cushion on the half-mile.

By halfway, Bunting, Jordan Watson, and Joseph Watson had spaced out over Ryan Riddle and Matt Hawkins.

The battle was for fifth with five laps remaining, as Brandon Watkins, Hawkins, and Wright were battling to etch their name in the top five.

With two laps remaining, Bunting hit lapped traffic, allowing Jordan Watson to close the gap in a hurry. The distraction would not be enough for Watson, as Bunting captured his first win of the 2020 season. Jordan Watson, Joseph Watson, Riddle, and Watkins rounded out the top five.

Misfortune happened for R. Robinson’s strong efforts as he slowed with mechanical failure on lap eight.

On lap ten, Pettyjohn got under A. Robinson on the restart to challenge for the lead, but was unable to complete the pass.

Zac Weller led all 15-laps of the RUSH Late Model event, holding off previous track champion, Joey Warren, Sparky White, Kerry King, Jr., and Derek Magee. Noteworthy was Matt Hill who recovered to an eighth-place finish after being penalized for jumping the start while running third.