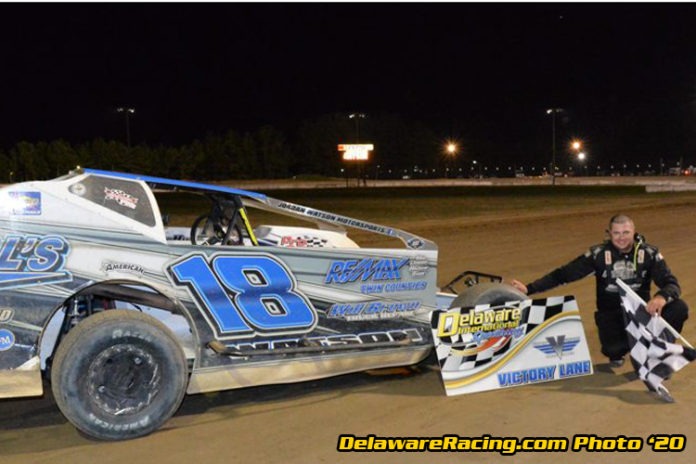 DELMAR, DE – Jordan Watson became the first repeat winner in the Delaware Big Block division at Delaware International Speedway on Saturday night. HJ Bunting started in the pole position by virtue of the redraw and jumped out to an early lead, with Watson and Matt Hawkins on his heels.

On a lap three restart, Bunting would succumb to mechanical failure, granting the lead to Hawkins. Hawkins, who was trialing a new car combination, was stuck to the top cushion of the ½ mile.

By lap 18, Hawkins had met lapped traffic. Watson applied pressure on the bottom of the speedway and was able to power off the fourth corner to take the lead. Hawkins would stick with Watson but was unable to regain the top position. Ryan Riddle, Kevin Sockriter, and Carson Wright rounded out the top five.

Greg Humlhanz captured his first victory of the season in the AC Delco Crate Modified feature event in his family-owned No. 02. Humlhanz kept pressure on the leader, Dwayne Crockett, as he consistently managed the bottom-side of the racing surface.

With five laps remaining, Humlhanz remained door to door with Crockett as they drag raced down the front stretch. Humlhanz was able to control a late race restart, beating Crockett, Sean Metz, Trent Willey, and David Jenkins to the checkered flag.

Matt Hill returned to victory lane after outdueling Zac Weller and Derek Magee in the early stages of the RUSH Late Model event, before they both succumbed to mechanical failure. Hill would outlast the late-race strength of Billy Thompson, Austin Hubbard, Jason Dean, and Sparky White.