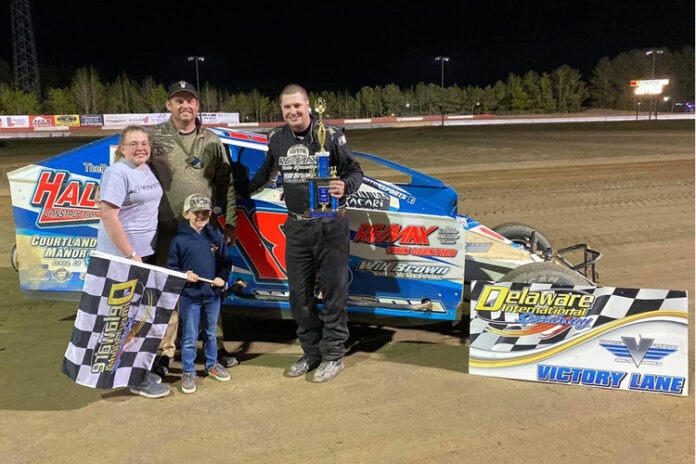 DELMAR, DE –  This past Saturday on a beautiful spring day, the Delaware International Speedway helped bring together an entire community in response to the recent tragedy in the town of Delmar.  “Delmar Night” has traditionally been one of the first points paying race of the season at DIS, and this season it became much more. Spectators packed into  the facility to pay their respects to Corporal Keith Heacook, and take part of the benefit auctions that were taking place at the speedway. At first count, it appears donations and auction proceeds will top $50,000, all of which will be put in a trust for Corporal Heacook’s son, Matthew.  Due to the unprecedented amount of people coming to the speedway, leadership at the track had to delay the start of the race to make sure everyone had a chance to get into the historic event. Corporal Heacook’s son, Matthew Heacook was in attendance for the benefit race in which he was the honorary starter, and got to wave the green flag on Saturday, as well as take laps in a Delmar Police car during the national anthem.

The 2021 season opener for the Delaware Dirt Modifieds went green, and on lap number one we saw cars going three wide and battling for position. Austin Hubbard was quick moving up in the field, Hubbard moved up to fifth on the opening lap of the feature. Former Champion, HJ Bunting maintained a comfortable lead out front over the rest of the field, and appeared to be the car to beat. Fans were watching Jordan Watson, the 2020 points champion in the division, starting to come to life, but on lap 8, Bunting who had almost a three second lead, came into contact with the back of the lap car Justin Eason who was stopped in turn three. After coming to a stop, Bunting had to go to the rear of the field.

Brad Trice would take the green on lap number nine, and would begin feeling pressure as Watson closed in. Meanwhile, Bunting who was attempting to charge back through the field was off the pace, and he pulled the #19 car into the pits for the evening. Robert Dutton brought out the caution on lap 12, which put Watson within striking distance of Trice on the restart. Watson and Trice would battle side by side, with Watson finally clearing Trice on lap 18. As Watson began to check out, the battle for fifth was heating up as Carson Wright and Brandon Watkins were battling it out. Coming down to the final lap, Kevin Sockriter took third from Ryan Riddle, and Jordan Watson came out victorious, picking up right where he left off in 2020. In victory lane Watson brought the crowd to tears when he announced he was donating his winnings to the family of Corporal Heacook, and the Franklin Family who were also attacked in the tragic events.

The Rush Late Model division, brought great racing from the drop of the green flag. On the opening laps, it was side by side for first place between Matt Hill and Derek Magee.  “Nitro” Nick Davis, was closing in on Hill for the second spot, and Hill was attempting to hunt down Magee. In the closing laps it was stilll a three car battle for first between Magee, Hill, and Davis. Derek Magee ultimately was able to hold off Hill and Davis off and take the win!

In the AC Delco PSC Modified division, it was a battle between Trent Willey and Adam White in the feature. Willey and White were still fighting for the first spot coming down to two go, but a string of cautions came out just as Willey was about to get around White on multiple occasions.  After a couple of green & white then checkered restarts,  Adam White was able to hold on to the top spot with Willey coming home in second.

Jimmy Wills put the 22w, in victory lane in the Mod-Lite feature. It was Wills’ second win in a row after picking up the win the previous night at Middleford Speedway.  Rounding out the evening in victory lane was Joey Waters, who dominated the Delmarva Chargers feature in his Fast Ford.

The Delaware International Speedway, will be back in action next Saturday for the USAC sprint cars, along with our weekly divisions. As always, fans can view live in person, or check out our PPV Live Stream via our Facebook or website. To view the entire schedule and more log on to  www.delawareracing.com or call the speedway office with any questions at 302-846-3911 weekdays.