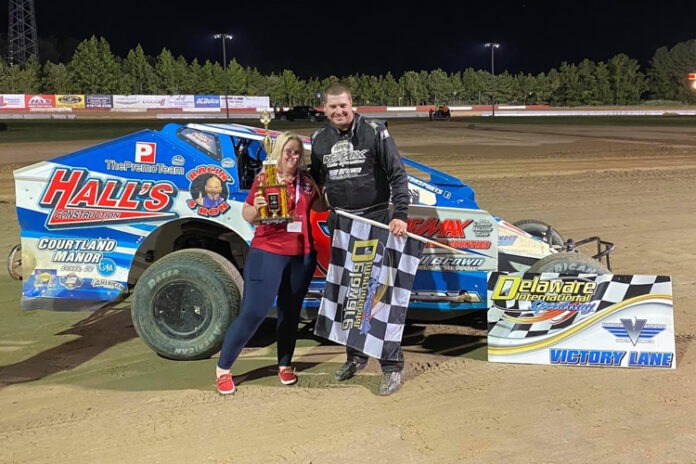 DELMAR , DE – After nearly two months of weather cancellations Delaware International Speedway was finally able to resume the 2021 season on Saturday Night. A strong field of cars were on hand for Delaware Lottery night at the speedway, and Jordan Watson picked up his third win this season in the Delaware Dirt Modified division and collected the $2,750 purse.

The Delaware Dirt Modifieds had an extra $1,000 reasons to win thanks to Rent Equip putting up the winner bonus on the night, and it would be Robert Dutton leading the field to the green flag in hopes of bringing home the big prize. On lap number five Dutton’s lead had shrunk to virtually nothing when second place Jordan Watson was all over the back bumper of Dutton. Watson would battle hard with Dutton and eventually took over the top spot on lap number six. Meanwhile, former track champion Ricky Elliott was moving the 12k car up into the fourth spot and started closing in on the battle for second between Dutton and Brad Trice.

Up front, Watson was battling with lap traffic, and the caution came out on lap number ten for Kevin Sockriter and Matt Smith. The field went back green, and Watson had a great restart that quickly allowed him to pull away. On lap thirteen Trice would take over second from Dutton, but time was running out with Watson already out to an almost three second lead. Watson would start to see his lead slightly dwindle as once again he was battling lap traffic coming down to two laps go. However, Watson would clear the lap traffic, and cruised his way to the checkered flag, making it three straight wins in the modified division for the season.

In the AC Delco Modified feature, Greg Humlhanz would lead the field of 24 cars to the green flag. The Caution would come out early for William Adams, and once the green flagged dropped it was Mike and Adam white hot in pursuit of the 02 of Humlhanz.

However, the caution flag would come out for a pile up in turn one on lap number three. On the ensuing restart, Adam White had a great jump out of the hole and put his car on the high side with his eyes on the leader. Humlhanz, would maintain a comfortable lead at the halfway point of the race. The battle was once again heating up for second place with Adam White on the outside and his dad, Mike White on the inside battling it out. Down to the white flag Humlhanz was two turns away from taking the checkered until the caution came out for a car parked on the pit exit road. On the restart, Humlhanz had a great restart and would maintain the lead and put his car into victory lane and collected the $1,450 dollar purse courtesy of Party Central.


In the RUSH Crate Late Model Feature, defending champion Derek Magee would lead the field to the green flag. Matt Hill battled Magee side by side from the drop of the green for the lead, while Nick Davis put pressure on Joe Warren for the third spot. Hill eventually completed the pass for the top spot while Davis put the 92 car into the second spot on lap number six.
The caution would come out, and Magee charged underneath leader Matt Hill on the restart..

Three laps to go in the race, and Chris (Tippy) Martinez would spin out, bringing out the caution and tightening the field back up. Cars went back green single file with three laps to go, and Derek Magee did not get the start he was looking for which would stack up the field going back to green, and allow Matt Hill to pull away from the field and go onto win the 15 lap feature race.

In the Mod-Lite Division , Jimmy Wills would immediately take over the lead on lap number one. Tim White brought out the first caution of the evening when his car came to a stop in turn two. The V75 of Brandon Dennis moved up into the second spot after starting fourth, but unfortunately, Dennis would shortly thereafter bring out the second caution of the race. When the race went back green Jimmy Wills would dominate the remainder of the race and go on to take the feature win in the Modified Lites.

Saturday night Delaware International Speedway will be back under the lights! It will feature Delaware Dirt Modifieds, AC Delco PSC Modifieds, RUSH Crate Models, Mod-Lites and Vintage Cars. For more information during the week, check out DelawareRacing.com or call us at 302-846-3911.