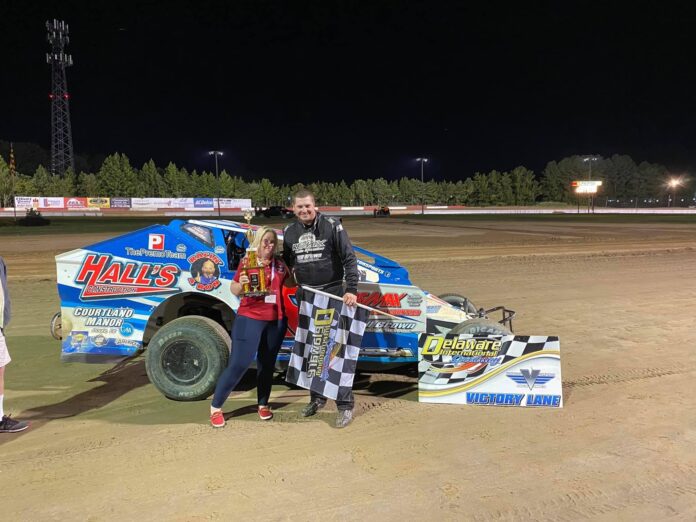 DELMAR, DE- It was a perfect night for dirt track racing this past Saturday night in Delaware. Delaware International Speedway hosted its annual “Dave White Memorial” race on Elliott Farms night. Fans experienced action packed racing all night long across multiple divisions . The Super Late Models made their second appearance of the year, but the hot streak continues in the Delaware Dirt Modified division for Jordan Watson as he picked up his fourth consecutive victory of the season. It was also a big night for Matt Hill , who has now locked himself into the fall championship race for the RUSH Crate Late Model series after picking up the win in the twenty lap feature race.

Howard O’Neal lead the modifieds to the green flag to start the feature event. However, points leader Jordan Watson would sail past the 09 as they entered the first turn, and would go on to lead lap number one. The first caution of the evening came out for David Shirk, and would tighten the field back up, erasing Watson’s lead. Watson jumped back on the loud pedal, and would lead the field back to the green, but caution came out for HJ Bunting after he tried making it three wide in turn one.

Back to the green Ryan Riddle stuck his nose into second spot after the restart, and claimed the spot and set his eyes on Watson. However, Watson had over a straightaway lead that was growing each lap before Ricky Johnson would bring out the caution for the third time. On the restart, Carson Wright had a great jump, and moved the number 91 into the third spot over O’Neal. A big battle was heating up mid pack between Matt Smith, HJ Bunting, and Kevin Sockriter. Cars were spread out all throughout the field coming down to five to go, with Watson still well in control. Watson started to battle lap traffic which was slowly allowing Riddle to close in, but Watson would manage to navigate lap traffic and go on to pick up his fourth win of the year.

For the second time this year the Super Late Models went green at DIS. Rob Schirmer lead the field to the green flag, but would instantly have pressure from Mark Pettyjohn as he passed Donald Lingo and Schirmer to lead lap number one. A few moments later, the red flag was displayed after David Smith flips over in turn number four, but thankfully walked away with nothing other than a torn up race car.

After the brief red flag, Lingo had a great restart and put pressure on Pettyjohn for the top spot. Lingo passed Pettyjohn in turn number two, and never looked back from that point forward. Each lap for Lingo continued to get better and better, as he was slowly catching up to the tail end of the field. Schirmer and Joey Hoffer were side by side for the third spot, with Robbie Emory starting to eye his way to the front. At the halfway point of the race, the cars were spread out evenly, and the race would remain caution free with Donald Lingo Jr cruising his way into victory lane, and pick up his first win of the season.

A strong number of cars we’re on hand for the AC Delco PSC Modified feature race. After a string of cautions, fans witnessed a spectacular last lap pass by Adam White to take the win. Trent Willey started on the pole an commanded the race . The feature went green and saw four wide on the start for the fifth spot, but a caution would come out for two different incidents on the track.

Back to original restart, Wiley had a nice start but Greg Reed started to feel pressure from Greg Humlhanz for the second spot. The caution would come out on lap three for William Adams in turn number one. On the restart, cars were three wide for second between Humlhanz, Adam White, and Reed. The caution would come out once again, which then lead to a string of yellows until race officials implemented single file restarts.

On the single file restart, Eric Kormann put the number 10 car into the fifth spot, cracking the top five for the first time of the night. Meanwhile, Adam White charged into the second spot and starting to put pressure on the back bumper of Willey until the caution came out for Greg Reed. With two laps to go, White had a great restart and had his bumper all over the number 17 car. With the white flag being displayed, everyone was watching White alongside Willey as they dueled it out for the remaining two turns. White would pass Willey and put his number 15 car into victory lane once again this season.

Rush Crate Late Model drivers had more reasons this past Saturday to win than just a pay day. That extra bonus was that whoever won the feature got locked into the infamous Delaware State Dirt Track Championships in October. In the twenty lap feature race, Joe Warren lead the field to the green flag. A two way battle for the third spot between Derek Magee and Ben Scott would get hot and heavy right out of the gate. Upfront there was side by side racing between Joey Warren and Matt Hill, with Hill putting on the full court press on Warren for the top spot. Matt Hill would make the move on him and get by Warren, and begin to check out.

Lap traffic started to play a role in the race, Magee and Warren were battling lap cars, which allowed Hill to start putting more distance between those two. At the halfway point of the race, the top three were spread apart from each other, and nobody nearby to close in. Meanwhile, the fourth spot battle was tense between Sparky White, Ben Scott and Kerry King. It looked like Matt Hill was going to clinch a spot in the fall championship without any pressure, but a late race caution would come out as the leaders were about take the white flag. On the restart Warren looked underneath Hill, but Hill would show no fear as he began to pull away and take home the victory and lock himself into the fall championship .

In the Mod Lite division, Tim White would lead the field to green, and quickly the battle was getting good between Jimmy Wills and White for the top spot, however the caution would come out on lap number one. The race went green once again, but a big wreck on lap number 10 ended with TJ Williams flipping over, and fortunately was ok. With five laps to go, Brandon Dennis was side by side with Tim White, but White had mechanical issues which allowed the V75 of Dennis to pick up his first win this season.

Racing will return this upcoming Saturday at the historic half mile with the Delaware Dirt Modifieds, Super Late Models, RUSH Crate Late Models, AC Delco PSC Modifieds, Modified Lites, and Vintage Cars. To view the entire schedule and more log on to www.delawareracing.com or call the speedway office with any questions at 302-846-3911 during the weekdays.