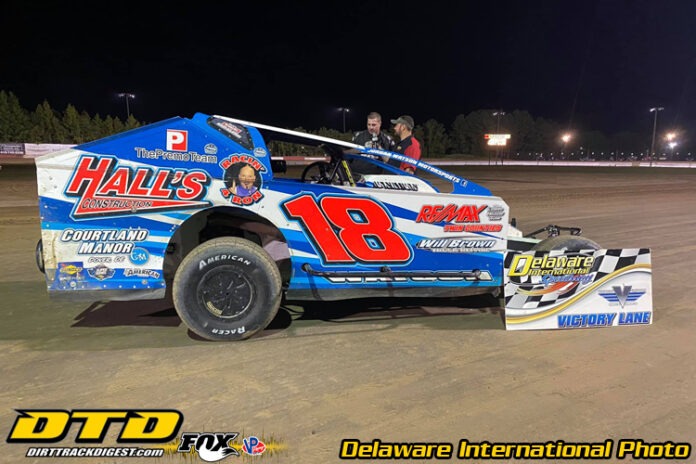 DELMAR, DE – Racing resumed this past Saturday night at Delaware International Speedway after a brief hiatus in the schedule due to multiple rain outs. After the multiple rain outs, the only remaining race on the point schedule was the September 4th race. There was multiple storylines amongst the weekly divisions, Jordan Watson swept the entire Delaware Dirt Modified season after winning the twenty-five lap feature race. The Delmarva Super Lates Models raced for a chance of being locked into the Delaware State Championship weekend. Mark Pettyjohn would claim the winnings and the clench a spot into the champ show. In the USAC wingless sprint car feature, Alex Bright picked up win number eight of the 2021 schedule for the touring series.

H.J Bunting led the field of modifieds to the green flag, for their twenty- five lap feature race. Immediately, Brad Trice moved his 33 machine into the second spot after starting in the fourth spot. On lap number one, trice was about take over the top spot, until Carson Wright brought out the first caution of the feature race. While under caution , Austin Hubbard’s modified had a mechanical issue on the back straightaway, Hubbard would be done for night after having a great run during his heat race.

Back to the green flag, Jordan Watson had a great restart and took over the top spot from Bunting. Caution would come out on lap number three for Ricky Johnson. With twenty two laps to go, Watson pulls away but a battle for the second spot was heating up between Trice, Bunting and Ricky Elliott. However, Elliott would draw the caution flag on lap number seven after coming to a stop on the front straightaway.

With eleven laps to go, the field once again went green. Trice kept Watson in striking distance with Bunting riding in the third spot. With eight laps left in the feature Trice was battling Watson for the lead, but in a shocking turn of events Trice would clip the edge of the wall and breaks the left front . Watson would face no pressure for the remainder of the race and set sail for the checkered flag, picking up the final points race of the season for the modifieds.

The USAC East Coast Wingless Sprint Car’s went green for the only time this year at Delaware International Speedway. The start of the feature had a no start, after Joey Amantea went a little early on the initial start. After the second start , the field would complete lap number one unfortunately Colin White would take a tumble in turn three which brought out the red flag. The wingless sprints went back to green for the third time of the evening , Briggs Danner took the lead on the top side of speedway with Bright passing Kenny Miller for second. As the race continued to progress Bright was closing in on Danner. After a late race caution, the field was stacked back together and Bright would have a great restart over Danner and pull a slide job to take over the lead for the first time of main event. Bright would dominate the remainder of the feature and bring home the win in the twenty five lap event.

The Super Late Models went green for their feature event. Jason Dean would lead the feature event for six laps, but Mark Pettyjohn would take over the lead from Dean on lap number seven. Pettyjohn had reeled in the tail end of the field, but would catch a break from the lap cars as David Smith would bring out the first caution of the feature on lap nine.

With eleven laps to go, PettyJohn maintained the lead after the restart but Donald Lingo Jr was the fastest car on the track, in which he started to slowly close in Pettyjohn. With five laps to go, caution would come out for JT McLanigan. With a five lap dash, Pettyjohn would maintain a comfortable lead and bring home his second win of the season and clinch his spot into the championship weekend.

Derek Magee, last year’s champion in the Rush Crate Late Model division would claim another victory this season. A string of cautions and failing to get a lap in, track officials decided to implement single file starts. When the cars went green, there was a great battle between Kerry King and Matt Hill for the second spot. Nick Davis drove his car into the third spot passing Kerry King. On lap number five, another caution flag was being displayed for Jerry Barker . On the restart Magee started to put distance between Hill and Davis. Magee would continue to pull his car away from second place and drive away with another win in the RUSH Late Model Series.

The last feature of the evening was the AC Delco Modified feature race. Greg Humlhanz started from the pole and commanded the race from start to finish. Fans were treated to many great battles for the sixth position as Zac Weller would drive his machine on the outside of the speedway and create three wide racing amongst Weller, Greg Reed and Eric Kormann. A caution would come out on lap number six for William Adams.

On the restart, Michael White would charge from second and put pressure all over Humlhanz, but a late race caution would crush White’s opportunity to overtake the top spot after Humlhanz had a great restart. Humlhanz would put his 02 machine into victory lane for the second time this season.

In the Mod Lite division, Tim White would take home the win over a pair of Brandon’s in which Brandon Sturges finished second and Brandon Dennis rounding out the podium finishers. Other feature winners included Kerry King Sr coming home victorious in the Vintage Modifeds and Terry Chaney winning in the Sportsman division.

Racing will not return at the historic half mile until October 2nd , for the 49th running of the Camp Barnes Benefit Stock Car Race . To view the entire schedule and more log on to www.delawareracing.com or call the speedway office with questions at 302-846-3911 weekdays.