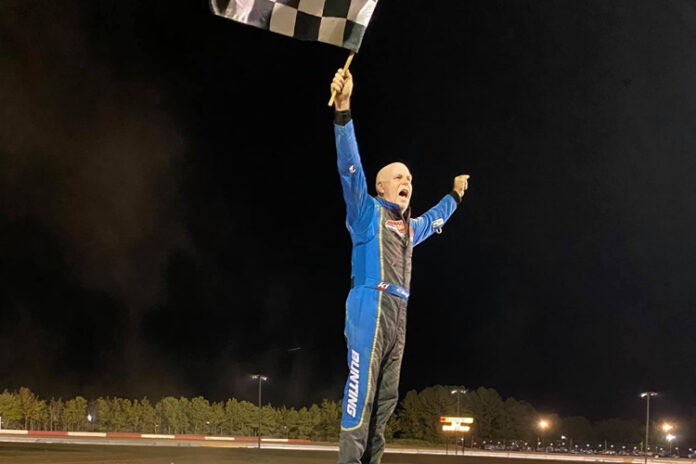 DELMAR DE- It was a beautiful evening this past Saturday for the 49th running of the Camp Barnes Benefit race at Delaware International Speedway! Fans packed all around the historic half mile speedway and witnessed a stellar field of cars battle it out for that coveted Camp Barnes win. Local favorite HJ Bunting would hold off the “invaders” and score his first win of the year in the twenty five lap, Delaware Dirt Modified feature race.

However the “invader” Rick Eckert, the 2011 World of Outlaws Late Model Series Champion
would make the drive to Delaware International Speedway and pick up the win in the Super
Late Model feature event. The Camp Barnes Benefit race is the main form of fundraising for the Delaware State Police, all proceeds go directly to benefit Camp Barnes. Camp Barnes is owned and operated by the Delaware State Police. Because of the money raised at this event, children ages 10 to 13 are eligible to attend Camp Barnes at no cost to their parents or guardian.

Drivers in the Delaware Dirt Modified feature race had their eyes on the $4949 winnings . Last year’s winner, Ryan Watt lead the strong field of modifieds to the green flag. Immediately cars were already getting tangled up on the start , the caution would be displayed which would cause the race to go back to original restart. With no laps complete, Watt lead the field green once again. Bunting would be all over the back bumper of Watt for the first lap , Bunting would take over the top spot on lap number two. Meanwhile, fans were glued to the battle between Jordan Watson and Billy Pauch Jr for the third spot as both drivers were neck and neck each lap.

Caution would come out on lap four for Brad Trice. Bunting would lead the field back to the
green flag but caution would come back out for Howard O’Neal who spun around on lap six.
Jordan Watson would have a great restart after the caution, Watson would get around Watt for the second spot. Bunting started to see lap cars in front of him, but would catch a break when Howard O’Neal and Chad Clark went for a spin in turn one. Bunting would lead the field to the green once again , on lap twenty with five to go, Bunting would catch lap traffic but that would come to a halt when the red flag would be displayed after Ryan Krachun goes upside down after tangling up with Pauch Jr. Fans were relieved to see Krachun walk away from the wreck not hurt.

With only four laps left to go, Bunting , Watson and Watt were all nose to tail fighting
for the lead as Craig VonDohren and Frank Cozze were starting to close in on the top three. But on lap twenty four, the caution would come out for Rusty Smith which lead to a one lap
shootout to the checkered flag. Bunting would lead the cars to the single file restart, where he would ride the cushion all the way around and pick up his first win of 2021 at Delaware
International Speedway.

Mark Pettyjohn lead the Super Late Models to the green flag. Rick Eckert would take over the top spot from Pettyjohn on lap two. Making her return to racing, Amanda Robinson would go by Mark Pettyjohn and take away the second spot and now have her car set on chasing after Rick Eckert. Caution would come out on lap four for Mark Pettyjohn , he would be done for the evening. On the restart, Ross Robinson would charge after his wife and the couple would battle it out for the second place. Meanwhile Eckert, starting to pull away from the field. At the halfway point of the race, Eckert would catch lap traffic as Ross and Amanda continue to fight for the second spot. On lap number sixteen the caution would come out for David Smith right who spun right in front of Eckert. On the restart, Ross would get by his wife and take over the second position. Caution would come out once again for Jason Dean who came to a stop on the back straightaway. Five laps to go in the race, third place Amanda Robison got loose and lost a position but, Rick Eckert would sail away and pick up the win in the Super Late Model Feature.

The biggest class of the evening, 602 sportsman had over 30 cars take the green flag for their twenty lap feature race. Michael White lead the strong field to the green flag. On lap one caution would come out for a car spinning in turn one. Back to the green flag, Joe Toth began chasing down White and was about to be all over the back bumper of White until the caution flag was being displayed after a pile up in turn one. On the restart, Bobby Watkins got around Toth and started to real in White. However, caution would be displayed for Tyler James who came to a stop on the back straightaway. With thirteen laps to go the race went back green, Toth would get around Watkins and he would once again was trying to find a way to get around White.

On lap ten we would see another caution flag being displayed, so the 602 Sportsman would see their first single file restart. White had a great restart and started to pull away from
second. Scott Hitchens and Eric Kormann were battling it out for that fifth spot . On lap sixteen, Joe Toth would take over the top spot and would lead the remaining four laps of the feature and take home the win.

Delmar’s Sparky White leads the field to green flag for the twenty lap RUSH Late Models
Feature event . Ross Robinson would immediately take over the top spot, with 2021 track
champion Matt Hill following Robinson. Caution would come out on lap one of the race, during the caution Derek Magee who was in fourth pulled into the infield. He was done for the evening. Back to the green flag, Matt Hill would get around Ross and take over the lead where he would put on a clinic for the remainder of the race. Joe Warren had moved into the third spot at the halfway mark of the race and was chasing down second place Robinson. However, Matt Hill was getting faster each lap. On lap eighteen, Kerry King Jr was side by side with Joe Warren trying to overtake that spot from Warren . Hill would go on and pick up the win with Robinson in second.

In the Mod Lite division, veteran Tim White had maintained control of the feature for majority of the race. But after a string of cautions, Jimmy Wills took over the lead with five laps to go. After a late race caution, Tim White gave it everything he had to take the spot away from Wills but Jimmy would go on and pick up the win in the fifteen lap feature race.

Racing will not return at the historic half mile until October 22nd and 23rd for the Delaware
Champ Show Weekend . To view the entire schedule and more log on to
www.delawareracing.com or call the speedway office with questions at 302-846-3911
weekdays.