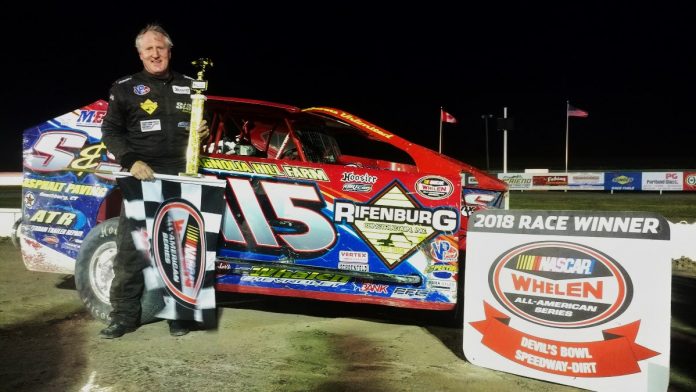 WEST HAVEN, VT – The saying goes that old dogs can’t learn new tricks, but Kenny Tremont Jr. learned one in the season opener at Devil’s Bowl Speedway and used it on Josh Sunn at his first opportunity and won the 30-lap Central Vermont Motorcycles Sportsman Modified feature on Sunday, June 3.  For the veteran racer from West Sand Lake, N.Y., the victory was the 80th of his career at the Vermont track, extending his all-time record.

A heads-up lineup after qualifying heats put Tremont and Sunn on the front row for the headline race for the weekly NASCAR Whelen All-American Series, setting up a rematch from the opener one week earlier.  In that race, Sunn surprised Tremont by using one of Tremont’s trademark inside-lane passes to take the lead and the win.  This time around, Tremont anticipated Sunn’s every move and struck when the time was right, passing his young rival in heavy lapped traffic with 10 laps remaining.

Paolo Pascarella of Troy, N.Y., came home a first-time Devil’s Bowl winner in the O’Reilly Auto Parts Limited Sportsman division.  The 20-lap feature that was slow to get going but had great racing once it got into a rhythm.  Pascarella led all but two laps but was under nearly constant pressure from opening night winner and eventual runner-up Travis Billington.

Billy Duprey of Hydeville, Vt., hit a big milestone in the 20-lap Rosen & Berger Super Stock feature, as he collected the 50th victory of his Devil’s Bowl career.  Duprey’s win was redemption after he suffered a massive driveline failure while leading on opening night.  Defending champion Chris Murray finished second after putting on a wild show on the extreme outside lane.  Scott FitzGerald, Curtis Condon, and Lou Gancarz were next in line.

Jason Porter of Freeport, Maine, was the overall winner of the annual “3×10” segmented event for the Portland Glass Mini Stock division.  Porter put together the lowest three-segment total score by finishing second, second, and ninth in the three 10-lap segments, for a total of 13 race points.

Colby Beinhaur of Shoreham, Vt., was a first-time winner in the Friend Construction 500cc Mini Sprint division, dominating the 15-lap feature race.  Beinhaur led by as much as a half-lap over the rest of the field, outdistancing runner-up Cody O’Brien and first-time Devil’s Bowl racer Brandon Emerson for the win.  Rookie Dakota Green finished fourth with Erick Mulready fifth.

Devil’s Bowl Speedway returns to action with a special mid-week event on Wednesday, June 6, as the ground-pounding “358” Modifieds return with the King of Dirt Racing Series, presented by A-Verdi Storage Containers.  The Limited Sportsman, Super Stock, and Mini Stock divisions will also be on the card.  General admission is $15 for adults, $13 for seniors, $5 for teens (13-17), and free for kids age 12 and under.  Racing starts at 7:00 p.m.