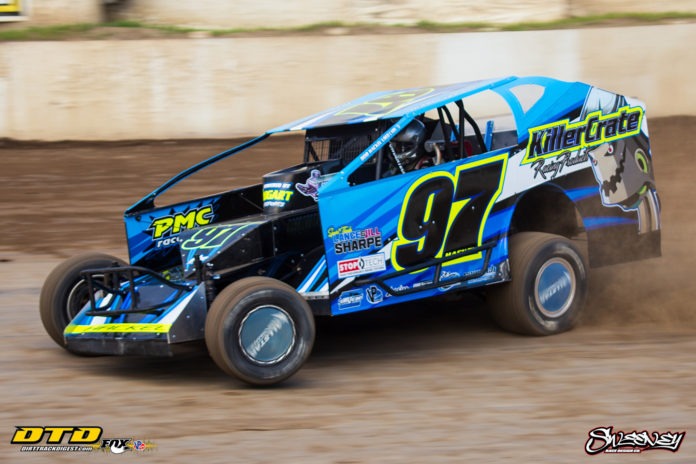 Hackel’s win in the 30-lap Pepsi Sportsman Modified race came in the annual Father’s Day “Topless” Special, in which the cars race without roofs for a different look and feel. Outside polesitter Alex Bell’s car broke coming to the green flag, creating a massive scramble on the frontstretch, but after the restart 2016 Devil’s Bowl champion Hackel blasted from his third-place starting position into the lead.

The Rensselaer, N.Y., racer put his car on the extreme outside lane and never looked back, lapping most of the field during a long green-flag stretch. A handful of cautions in the final 10 laps gave Jack Speshock, Demetrios Drellos, Kenny Tremont Jr., and others a chance, but Hackel left them in his wake every time. The win gets Hackel back in a forward direction after a disastrous start to his season at other tracks in the region.

“We were told that there would be an outside lane tonight, and I made up my mind that that’s where I was going,” Hackel said after the win. “It worked out perfectly, and this win is exactly what we needed as a team.”

Tremont ended up on top of the battle for second place, followed by Drellos, a late-charging Frank Hoard III, and Speshock. Tim LaDuc recovered from a wild trip off the backstretch to finish sixth, and Robert Bublak Jr. finished seventh as the final driver on the lead lap. Rookie Josh Masterson finished eighth ahead of Jake Scarborough and Marty Kelly III. Twenty-nine cars attempted to qualify for 24 starting positions. Heats were won by Drellos, Scarborough, and Bublak, and Mike Palmer won the last-chance consolation race.

Anthony Warren scored his first victory of the season in the 20-lap Topless race for the O’Reilly Auto Parts Limited Sportsman division. The Shoreham, Vt., racer leaned on experience he gained in racing Sprint Cars several years ago to execute a few textbook “slide jobs” on the dry-slick track, and the last one was good enough to take the checkered flag; the win came on Warren’s 12th wedding anniversary.

Anthony Ryan – Warren’s cousin – took the lead from polesitter Johnny Bruno at lap 7, then dealt with Warren, Bruno, and Larry Gallipo up front in a sensational battle. Gallipo spun out of the lead just moments after taking command, leaving the others to fight it out. It was the “Anthony & Anthony Show” on the final lap, and Warren drove deep into Turn 1 underneath Ryan to slide up the track to steal the lead and the victory; it was the only lap that Warren officially led.

Ryan finished second and stopped in victory lane with a big thumbs-up for his cousin. Bruno took third ahead of Matt Bilodeau and Kevin Groff. Montgomery Tremont finished sixth, followed by Garrett Given, Lacey Hanson, Randy Ryan, and Scott FitzGerald. Each of the top-three finishers won a qualifying heat.

West Rutland, Vt.’s Andrew FitzGerald survived two crazy encounters to post his second-straight Super Stock win in that division’s 20-lap feature. FitzGerald spun his car early while trying to run on the inside lane, then had a big scare after the restart as several cars got crossed up and he was nailed by one of them on the right side.

Chris Murray stretched out to a big lead, but once again had a problem late in the race and began to fade. FitzGerald, now fully recovered and running the outside, passed Murray with three laps left to make it back-to-back wins to open the season. Murray held on for second with Jim McKiernan third, Russ Farr fourth, and Cam Gadue fifth.

Not to be outdone, Chris Conroy doubled up in a highly entertaining 20-lap Mini Stock race. The Newport, N.H., racer had a good battle with Shawn Moquin and Michael Daniels for most of the run before breaking away with a few laps left for his second consecutive win; there were five lead changes before Conroy took over for good.

Moquin finished second, well ahead of a razor-thin battle for third place. Big contact in the final corner saw Derrick Counter cross the finish line third, but he was penalized two positions for rough riding. That gave third place to rookie Chris Sumner, who beat defending champion Craig Kirby by inches for the spot; Counter was officially scored fifth. Daniels’ car shut down while leading, which created a big pileup that eliminated several other cars.

Former champion Austin Chaves of Chester, Vt., returned to victory lane in the Friend Construction 500cc Mini Sprint division, dominating the 15-lap feature. Chaves was the 2017 champion in the division and spent last year in the Limited Sportsman class before returning to the winged machines this summer. Chaves drew the pole starting position and was never challenged.

The Champlain Valley Vintage Dirt Modifieds made their first of two appearances at Devil’s Bowl Speedway with a pair of feature races. Former Super Stock champion Joey Trudeau of Hague, N.Y., ran away with the win in the 8-lap feature for the Antique division, driving an original Chuck Akulis “Pink Panther” car. Mike Wheeler and Frank Blanchard were next in line after a good battle.

Ravena, N.Y., driver John Flach Jr. won the 20-lap combined feature for the Vintage Modified and Sportsman divisions. Flach, driving a car that was a tribute to his own 1988 Lebanon Valley Speedway championship ride, won the overall race and was scored as the Modified class winner. Stephen Denton of Souquoit, N.Y., had an entertaining drive to finish second overall in an Alan Johnson tribute car, taking the Sportsman class win. Merv Blackwell and Kyle Hoard – both Modifieds – were third and fourth overall, and Frank Hoard Jr. with fifth in a Sportsman.

Devil’s Bowl Speedway will return to action on Sunday, June 28, with all five weekly divisions on the card. The general admission grandstands will remain closed until pandemic restrictions are lifted; new information will be announced as soon as it is available.