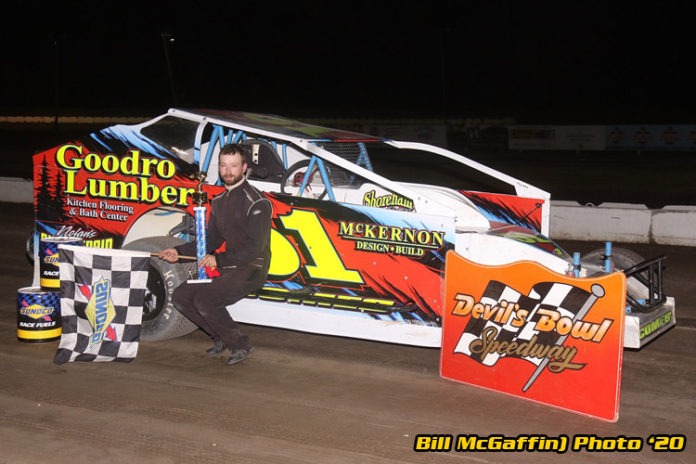 WEST HAVEN, VT – Things just work out perfectly sometimes, and that is exactly what happened for brothers Justin and Austin Comes at Devil’s Bowl Speedway on Sunday, June 28. In front of the first grandstand crowd of the season, the Middlebury, Vt., siblings swept feature wins in the Sportsman Modified and Limited Sportsman divisions on a night that also saw Bill Duprey, Shawn Moquin, and Cody O’Brien visit the winner’s circle.

Justin Comes struck first in the 30-lap Pepsi Sportsman Modified feature. Comes lived to his nickname as “The Highside Hustler” by setting sail on the top lane of the fast, tacky surface and dominating. Comes, who started fourth, turned around a two-week stretch of bad luck with the win.

“We didn’t start the season the way we wanted to, but this makes up for it,” Comes said in victory lane. “I love the outside lane here, and if I’m able to get out there and run as fast as I can, I don’t think there’s anyone who can do it better.”

Polesitter Tanner Siemons, who led the first three laps before giving way to Comes, had an outstanding run, holding second place for most the race. A pair of hard-charging drives put Demetrios Drellos and Kenny Tremont Jr. in the mix with Siemons late in the race, and a restart with eight laps left really cranked up the action.

Moments after his brother left victory lane, Austin Comes began his domination of the 20-lap O’Reilly Auto Parts Limited Sportsman race. Comes started on the pole position and led every lap for the first win of his young career. Behind him, an entertaining multi-car battle for second place played out through nearly the entire race. Lacey Hanson and Johnny Bruno had a full-contact battle on the final lap that went Hanson’s way.

The Comes sweep was the first at Devil’s Bowl for a pair of siblings since September 23, 2001, when Joe and Vince Santoro won in the Pro Stock and Hobby Stock divisions, respectively; the Santoros also doubled up on August 19 of that year and swept their division’s championships. The only other brothers to win on the same night at Devil’s Bowl were Bobby and Beaver Dragon, splitting a Late Model Sportsman twin-bill on asphalt on July 22, 1973.

The Super Stock feature turned from a dominant performance into an exciting battle right at the end. While four-time champion Bill Duprey of Hydeville, Vt., led every lap in convincing fashion, things got interesting as Jim McKiernan and Chris Murray made contact and spun while running for second place on the final lap.

The caution flag waved, and the race was extended from 20 to 21 laps with a green-white-checkered restart. In the scramble to the finish, Andrew FitzGerald ended up in second place, while Murray and McKiernan rebounded for third and fourth, respectively. Ronnie Alger was fifth.

Milton, Vt.’s Shawn Moquin won the 15-lap Mini Stock race in a photo finish over Chris Conroy. Michael Daniels dominated the race until cutting a tire with four laps left, giving Conroy the lead and a chance to make it three consecutive wins to open the season. Moquin came from behind on the final lap, though, and won a sprint to the finish line by about eight inches.

Cody O’Brien of Springfield, Vt., dominated the 15-lap run for the Friend Construction 500cc Mini Sprint division. The former champion dedicated his victory to the memory of Devil’s Bowl Speedway legend Butch Jelley, who passed away on May 1.

Devil’s Bowl Speedway will host the annual Independence Day “Firecracker” special on Thursday, July 2 at 7:00 p.m., with limited grandstand seating and drive-in spectator parking; full details for the event – including ticket purchasing options – will be announced soon. The Sprint Cars of New England tour will be on hand, along with all five of Devil’s Bowl’s weekly divisions. 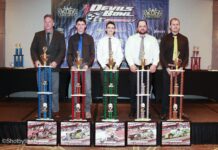