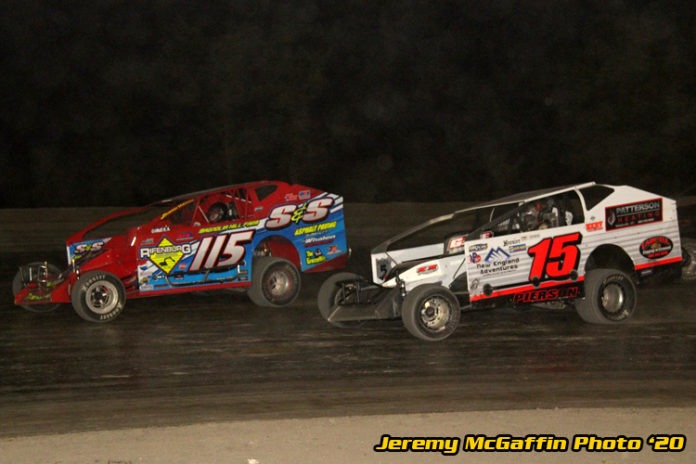 WEST HAVEN, VT – Adam Pierson and Kenny Tremont Jr. treated Devil’s Bowl Speedway fans to an unforgettable show on Sunday, July 12, with Pierson winning one the most exciting races in the track’s recent history. Their duel highlighted a win list that included Anthony Ryan, Dakota Desabrais, Cody O’Brien, and Cory Gray, in an evening packed with action and full fields of racecars.

Ten-time Devil’s Bowl champion Tremont was poised to shake the monkey off his back in the 30-lap Pepsi Sportsman Modified feature, putting together a dominant performance for most of the night. The West Sand Lake, N.Y., veteran needed only seven laps to drive from his 10th-place starting position to the lead, and then stretched out to a massive advantage.

It was not to be for Tremont, though, as Justin Comes’ car broke and stopped on the track before the final lap was completed. Under the Devil’s Bowl Speedway rulebook, the yellow flag was displayed, and a green-white-checkered restart was put in place, adding an extra lap to the race.

East Corinth, Vt., runner Pierson had driven from 19th on the grid into second place and was given a chance at Tremont’s lead. Pushing each other both physically and mentally, the pair had two false starts before they got it right, and one more restart for another incident led to an incredible finish that brought the house down.

Trading slide jobs on the slick surface, Pierson took the lead after the green flag in Turn 1 before Tremont repaid the favor in Turn 4 coming the white flag. Pierson pulled another slider in Turn 1 on the final lap to take the lead, but Tremont had a brilliant crossover move to draw even exiting Turn 2. Tremont then made a final bid on the outside lane in Turns 3 and 4, but Pierson held on to steal the win and send the crowd into a frenzy.

It was Pierson’s second-straight Sportsman Modified win, his third on the season in the division, and his fourth overall for the year at Devil’s Bowl, adding in a SCoNE Sprint Car victory on July 2. Disappointed, Tremont settled for second, while Tanner Siemons had a great drive from 13th to finish third. John St. Germain and Bobby Hackel, who – like Pierson – had to come through the last-chance consolation race to qualify for the feature, ran from deep in the field to finish fourth and fifth, respectively.

Anthony Ryan gave his local fans something to cheer about from the new infield drive-in parking section, with a convincing run in the 20-lap O’Reilly Auto Parts Limited Sportsman feature. Ryan, from nearby Benson, Vt., came from eighth at the start to take the lead at the halfway mark, and then drove away for his first win of the season. First-year Modified racer Josh Bussino continued his recent string of success with a runner-up finish, while Evan Roberts came from 12th to finish third. Austin Comes finished fourth, and Garrett Given rode the outside lane to fifth.

Matt Bilodeau led the next half of the top 10 finishers, ahead of early leader Scott FitzGerald, Kevin Groff, Jeff White, and Lacey Hanson. Point leaders Johnny Bruno and Anthony Warren each had a bad night, finishing 18th and 19th, respectively. Roberts, Given, and White won the heats.

With the Super Stock division off for the evening, the Mini Stocks were elevated to a 20-lap feature, and a first-time winner prevailed for the third race in a row. This time, it was Hampton, N.Y.’s Dakota Desabrais picking up his inaugural checkered flag, running from 10th place at the start into the lead on lap 8. Desabrais had to fend off all kinds of challengers after a restart with four laps left and scored a popular win.

Rookie Griff Mahoney made a bid for the win on the final corner and ended up with his best finish as the runner-up. Point leader Chris Conroy finished third – his worst result of the season to date – followed by Chris Sumner and Shawn Moquin.

Clarendon, Vt.’s Cory Gray grabbed the sixth Enduro win of his career at Devil’s Bowl in an entertaining 50-lap run that started 33 junkyard-stock cars, pickup trucks, station wagons, and even a Chrysler PT Cruiser with wood panel trim. Gray took the lead early in the survival-of-the-fittest race, and then rebounded from a collision on lap 27 that spun his well-used Nissan Maxima sideways. Chris Lussier – who led briefly after Gray’s mishap – finished second as the only other driver to complete all 50 laps. Jeff Smith was third, one lap off the pace, followed by Matt Wade and Lynn Sumner.

Devil’s Bowl Speedway returns on Sunday, July 19, with limited grandstand seating and drive-in spectator parking. Tickets are $16.50 per person for grandstand seating or $21.60 per person for drive-in parking; tickets must be purchased online by 5:15 p.m. on Sunday at https://buytickets.at/devilsbowlspeedway. The Sportsman Modified, Limited Sportsman, Super Stock, Mini Stock, and 500cc Mini Sprint classes will all be in action; spectator gates open at 5:30 p.m., with racing at 7:00 p.m.

NOTE: Full Enduro finish will be posted at www.devilsbowlspeedwayvt.com