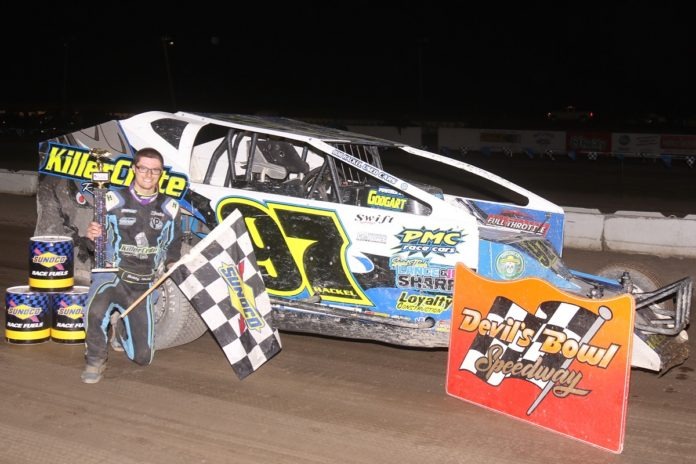 WEST HAVEN, VT – Bobby Hackel did not let a bump in the road get him down, and instead got right back on the winning track at Devil’s Bowl Speedway on Sunday, July 19. Hackel’s win was the headline moment of the night, which also saw Anthony Warren, Andrew FitzGerald, Willie Rice, and Kamden Duffy visit victory lane.

Hackel lost the championship point lead in the Pepsi Sportsman Modified division during the week due to a scoring recheck on a previous race, but he made up for it with an authoritative drive to his third feature win of the season. The fourth-generation Rensselaer, N.Y., racer survived a rough-and-tumble start to the 30-lapper which saw a spate of caution periods in the early laps, then drove from his 17th starting position into the lead on lap 10 and ran away uncontested.

Rookie Justin Stone of Middlebury, Vt., almost stole the show, however, taking the lead at lap 6 from veteran Alex Bell and pacing the field for four laps. Stone might have made a bid for the upset were it not for a restart, at which point Hackel zoomed up to the front and never looked back. Stone held on for during a long green-flag run to finish second. Jimmy Ryan, Justin Comes, and Bell rounded out the top five, each turning a stretch of bad luck around; for Bell, the finish was first of the year inside the top 20.

Unofficially, Hackel now sits in a tie for the point lead with fellow three-time winner Pierson, at 296 points apiece. Previous leader Drellos is third, just five points back at 291. LaDuc is fourth at 253 with Joey Scarborough fifth at 248.


Shoreham, Vt.’s Anthony Warren rebounded from a tough outing last week to grab his second victory of the season in the 20-lap O’Reilly Auto Parts Limited Sportsman feature. Warren started on the front row and led every lap, despite a pair of restarts. Point leader Johnny Bruno, who also had trouble last week, finished second, and Austin Comes came from 11th to take third place.

Gary English was a career-best fourth, and Matt Bilodeau drove from the back of the pack after an early jumble to complete the top five. Anthony Ryan was next in line, followed by Randy Ryan, Mike McGinn, Jeff White, and Kevin Groff. Warren and Lacey Hanson won the qualifying heats. Bruno leads Warren, unofficially, by nine points in the standings, 316-307. Bilodeau is third at 304, and Comes and Anthony Ryan are tied in fourth at 292 each.

Patience was a saving grace for Andrew FitzGerald in the 15-lap Super Stock feature, and it landed him in the winner’s circle for the third time this summer. The race in front of the West Rutland, Vt., driver was a barnburner as Bill Duprey and Jim McKiernan slugged it out in a full-contact battle for the lead; they traded the top spot four times officially before McKiernan finally spun with three laps to go. FitzGerald, who was tight to Duprey’s rear bumper throughout, pounced at the restart and drove off for the win. Duprey was second, and Curtis Condon beat Cam Gadue by inches at the line – three-thousandths of a second on the electronic scoring loop – for third place. McKiernan rebounded for fifth.

What Kamden Duffy may lack in size, he made up for with a heavy right foot, and the diminutive 12-year-old dominated the 15-lap Friend Construction 500cc Mini Sprint race for the first Devil’s Bowl feature win of his young career. Rookie Troy Audet took his fourth podium finish of his freshman season, and point leader Cody O’Brien finished third. Samantha Mulready and rookie Kaidin White rounded out the top five.

Devil’s Bowl Speedway has a doubleheader weekend on tap for July 25-26. On Saturday night at 7:30 p.m., the ground-pounding Small Block “358” Modifieds return for a 35-lap, $1,500-to-win tune-up for the August’s “Battle at the Bowl” event; they’ll be joined by the Limited Sportsman and Mini Stock divisions on Saturday. On Sunday night at 7:00 p.m., all five of Devil’s Bowl’s weekly divisions will be in action, and the full-fender Pro Stocks return for the first time in two years.