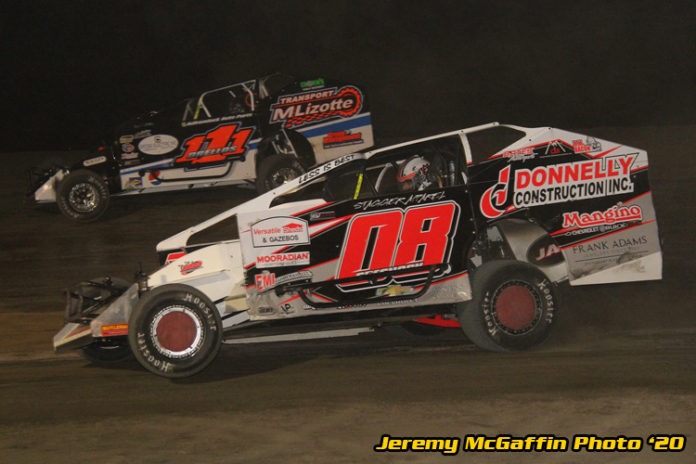 The event was a benchmark for the season at the Vermont track; not only did the race draw the first sellout crowd of the year in the pandemic-limited grandstand seats, the handicapper’s tower saw 163 racing vehicles signed in for competition.

Queensbury, N.Y., youngster Drellos blasted through the Pepsi Sportsman Modified field from his 17th-place starting position on the extreme outside lane, chasing down and then engaging in a sensational side-by-side battle for the lead with Jack Speshock at lap 15. The pair traded the top spot three times before Speshock crashed out just after the halfway mark, when he was unable to avoid a backmarker’s car that had suddenly stopped in the middle of the racing groove.

With smooth sailing ahead, Drellos was able to clear traffic and drive away for his first victory of the summer in the 38-lap special, run in memory of pioneering Devil’s Bowl champion Vince Quenneville Sr.’s most famous car number. Veteran racer John St. Germain was a late arrival to the front, having started 15th, and scored the runner-up finish for the second week in a row. Adam Pierson started alongside Drellos in 18th place and finished third after dicing with St. Germain.

Michael Wagner-Fitzgerald made the most of his first Devil’s Bowl appearance of 2020 by winning a hard-fought B-Feature for the Sportsman division. The Gansevoort, N.Y., racer sparred with rookie James Hanson before pulling away late. Chris Murray took second place with Hanson, Jamy Begor, and Marty Hutchins next in line.

The feature win for Drellos came with double championship points on the line, helping to extend his lead to 16 points over Pierson, 449-433. Hackel’s otherwise dismal night dropped him to third place, 55 points behind Drellos at 394 markers; Tremont (367) and St. Germain (355) complete the unofficial top five.

Johnny Bruno got his fourth win of the year in O’Reilly Auto Parts Limited Sportsman division, grabbing a double-points 20-lapper. Montgomery Tremont and Josh Bussino waged a see-saw tussle for the lead for the first dozen laps before Castleton, Vt., teenager Bruno came charging in.

Bruno survived a pair of restarts and the challenges of Bussino, Tremont, and Anthony Warren in the final circuits before pulling away. Warren slipped into second place for the third-straight race, with Bussino third. Larry Gallipo got past Tremont for fourth at the finish line. Anthony Ryan, Matt Bilodeau, Mike Ryan, Austin Comes, and Evan Roberts rounded out the top 10. Lacey Hanson and Anthony Ryan won the heats. Unofficially, Bruno leads Warren by just two points for the championship, 519-517.

Josh Coonradt added another notch in his belt by taking the 20-lap Pro Stock/Super Stock combination feature. The defending Super DIRT Week Pro Stock winner, from West Milton, N.Y., led every step of the way for his first win in the Pro Stock class at Devil’s Bowl. Scott Towslee was the runner-up for the second time in a row, ahead of Kim Duell, Jay Fitzgerald, and Ed Thompson.

In the Super Stock portion of the race, point leader Andrew FitzGerald of West Rutland, Vt., was a convincing winner for the fifth time in 2020, crossing the finish line seventh overall. Billy Duprey and Cam Gadue completed the podium for the Super Stocks, followed by Russ Farr and Tylor Terry. Duell won the Pro Stock heat and Duprey took the Super Stock qualifier.

Austin Chaves benefitted from a restart with nine laps complete to take his third Friend Construction 500cc Mini Sprint win. Samantha Mulready set the pace for most of the race, but a caution period proved costly for Mulready, as Chaves jumped into control on the restart. Mulready scored her best finish of the year in second, and point leader Cody O’Brien roared from the back after early problems for third place. Kamden Duffy and Kaidin White were next in line.

The Enduro Series was on track for its second 50-lap run of the season, and a recent record-high 56 entries piled onto the track for a mayhem-filled race. Three red flags and lots of wild crashes punctuated the action, but nothing could stop Clarendon, Vt.’s Cory Gray, the undisputed Enduro King, as he grabbed his seventh Enduro win since 2015; Gray started 25th on the field.

Jake Dumas came from 39th starting position to take the runner-up spot, one lap behind. Adding to the fun for the winner, Kyle Gray – the winner’s twin brother – finished third in a car that was purchased and prepared for him as a surprise bachelor’s party gift. Jonathan Mason started 53rd and finished fourth, with Bryce Allen fifth. Kyle Gray, Mason, and Allen were each two laps down, as was sixth-place Dustin Tierney. Eric Leno was seventh with 47 laps complete, followed by Scott Richner, Xander Stillwell, and Eric Friend – each four laps behind the winner.

Devil’s Bowl Speedway hosts one of the summer’s most highly anticipated events on Sunday, August 9, as the second annual “Battle at the Bowl” Big Block/Small Block Modified Challenge revs up. Superstar drivers Stewart Friesen, Matt Sheppard, Mat Williamson, and many more will be on hand for the unique event, featuring a pair of 25-lap features, the one-and-only “Pole Shuffle” match races, and the 50-lap, $7,500-to-win Challenge race. The King of Dirt Racing Crate Modified Series will also be on hand for the 40-lap, $1,500-to-win Leon Gonyo Memorial race.

Advance sale tickets are now available online, and quantities are limited by Vermont State COVID-19 pandemic guidelines. Grandstand seats are $30 (all ages) and Infield Drive-In tickets are $40, with kids age 12 and under free in the infield; pit passes are $45 per person and camping is free. Tickets are for sale online at https://buytickets.at/BBSBchallenge (processing fees apply), or at the speedway on race night while tickets last.