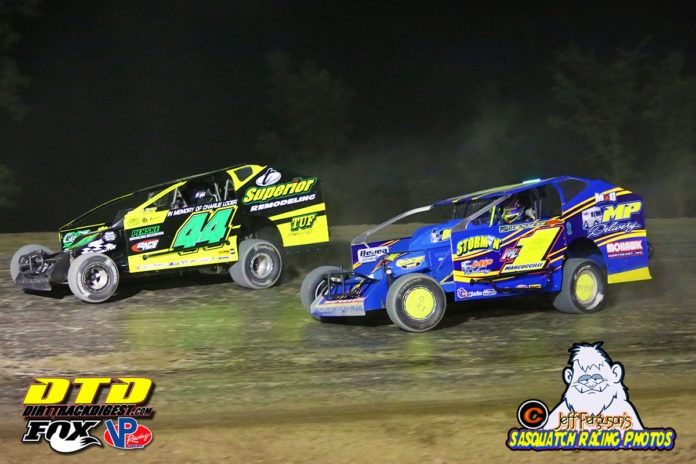 WEST HAVEN, VT – Anthony Perrego beat the most talented field of dirt Modified drivers ever assembled at Devil’s Bowl Speedway on Sunday, August 9, winning the second annual “Battle at the Bowl” Big Block/Small Block Challenge before an electrified, pandemic-weary crowd. With 65 combined entries vying for 30 starting spots in the 50-lap main event, Perrego came away with the big win and a check for $7,500.

Seating was limited to a sold-out 750 masked-and-socially-distanced grandstand spectators and about 400 infield drive-in fans – many of whom were attending their first race of the season amid COVID-19 restrictions – and the appreciative gathering made enough noise to substitute for 5,000. Cheers rained down during the night on winners Perrego, Jessey Mueller, Mat Williamson, and King of Dirt Racing Crate Modified Series winner Kevin Root.

Home-track favorite Mueller struck first, winning the 25-lap feature race for the Big Block Modifieds. The Chestertown, N.Y., racer – who started his career at Devil’s Bowl as a teenager – was good from the outset, winning his qualifying heat, starting on the pole of the feature, and leading every lap on his way to the 13th win of his career at the Vermont track. Mueller won $1,500 with his victory.

Canadian racer Williamson was one of 11 drivers who entered both the Big Block and Small Block divisions, beginning his impressive night as the runner-up to Mueller. Equally strong in both classes was Erick Rudolph, who finished third. Marc Johnson and Perrego rounded out the top five in the Big Block race, which drew 27 cars.

With 38 Small Block cars in the pit area, qualifying for just the 25-lap race was challenging enough. Lance Willix and Stewart Freisen led the field to the green flag, with Friesen leading the first 15 circuits. Williamson, of St. Catherines, Ont., was smooth and calculated, though, and drove past Friesen 16 laps in to sail away with the win.

Rudolph moved forward from seventh to take second place away from Friesen late. Friesen finished third ahead of Demetrios Drellos – who raced in all three divisions on the card – and a hard-charging Larry Wight.

Perrego and Willix were the darlings of the unique “Pole Shuffle” event, which saw the top eight finishers from each feature square off in short-distance, March Madness-style elimination races to determine the first 16 starting positions of the 50-lap Challenge. Underdog Willix won two rounds in the Small Block bracket and Perrego also advanced twice, squaring off against each other for the Small Block finale, which Perrego won. Jimmy Phelps and defending Pole Shuffle and Battle at the Bowl champion Matt Sheppard each advanced twice in the Big Block bracket, with Phelps beating Sheppard heads-up in the Big Block finale.

Perrego’s Small Block car ran the inside lane in the one-on-one, green-white-checker Pole Shuffle championship finale, with Phelps stuck to him on the outside lane. The fans cheered loudly as Perrego crossed the line first to earn the pole position for the main event.

It was all Perrego in the 50-lap main event, as the Montgomery, N.Y., racer led every step of the way despite restarts on laps 9 and 38. Phelps ran second until the final restart, when Marc Johnson, Williamson, and Rudolph – who struggled in the Pole Shuffle and started 13th in the main event – entered the picture. Perrego continued with the lead and stretched out ahead for a few laps before Williamson and Rudolph began reeling him in. The trio ran nose-to-tail in tight formation as they navigated lapped traffic with two laps to go, and Rudolph snuck past Williamson in the final moments.

Perrego’s Superior Remodeling No. 44 Teo Small Block sped across the finish line for the win ahead of Rudolph, who barely beat Williamson to the line. Johnson and Phelps completed the top five, followed in order by Wight, Willix, Mike Mahaney, Mike Maresca (from 22nd on the starting grid), and Sheppard.

The King of Dirt Racing (KOD) Crate Modified Series was the undercard on the evening, but the 40-lap “Leon Gonyo Memorial” race once again stole the show. Invader Kevin Root made the long haul across the New York Thruway from Geneva, N.Y., to capture the victory in his first-ever start at Devil’s Bowl Speedway, defeating a field of 30 feature event starters and 49 total starters.

Like Perrego in the Big Block/Small Block Challenge, Root set the pace before catching lapped traffic in the final laps, allowing Demetrios Drellos to catch him in the last two circuits. Drellos, the Sunday-night point leader in the track’s weekly Pepsi Sportsman Modified division, used a three-wide move to take the lead to complete lap 39, running on the outside with Root on the bottom lane and the lapped car of Joey Scarborough in the middle. Drellos got ahead in Turn 1 on the final lap, but Root stepped on the gas and reclaimed the top spot coming to the finish line, taking the win by just 0.187-seconds.

Root was ecstatic in victory lane and celebrated on the roof of his F.X. Caprara Honda No. 34 car with his son, Nick, and then made a memorable speech during his interview that had the crowd both laughing and cheering.

Devil’s Bowl Speedway returns to action on Sunday, August 16, at 7:00 p.m., with a full card of Pepsi Sportsman Modifieds, O’Reilly Auto Parts Limited Sportsmen, Pro Stocks, Super Stocks, Mini Stocks, and Friend Construction 500cc Mini Sprints, as well as the Champlain Valley Vintage Dirt Modifieds. Advance sale tickets will be available online, and Vermont State COVID-19 pandemic guidelines remain in place. Grandstand seats are $15 (all ages) and Infield Drive-In tickets are $20, with kids age 12 and under free in the infield. Tickets are for sale online at https://buytickets.at/devilsbowlspeedway (processing fees apply), or at the speedway on race night.

UNOFFICIAL RESULTS – “Battle at the Bowl”