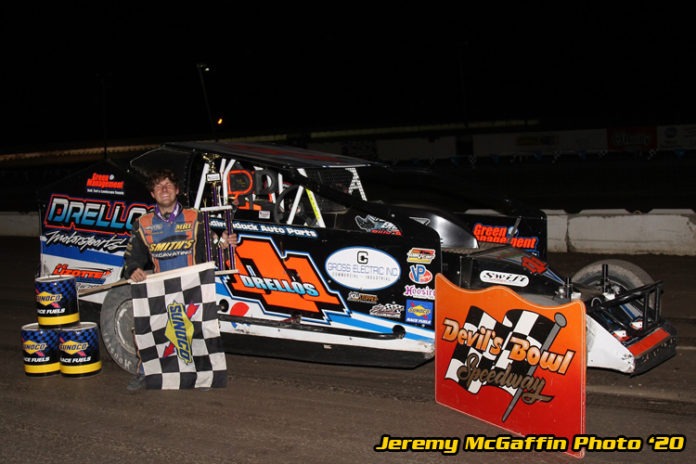 WEST HAVEN, VT – Demetrios Drellos and David Boisclair each stamped their ticket into the biggest Crate Sportsman Modified race in North America on Sunday night, August 30, when they scored main event “Win & You’re In!” victories at Devil’s Bowl Speedway. Because of their wins, the talented young racers will each be guaranteed starters in the Interstate All Battery Center Vermont 200 on Sunday, September 6.

Queensbury, N.Y., racer Drellos was the big winner in the special 54-lap Charlie LaDuc Memorial feature for the Pepsi Sportsman Modified division, but he was not the only star of the show. Rookie James Hanson had an outstanding drive in the opening laps, leading the first dozen trips around the half-mile in the most impressive showing of his freshman season.

Tim LaDuc, son of race’s late namesake, chased Hanson down to take the lead and hold serve through the middle stages of the race, but championship point leader Drellos hit the outside lane and sailed from 14th starting position to get to LaDuc. The pair battled for several laps and faced each other in a couple of restarts, but Drellos was able to clear LaDuc and lead the final 20 circuits for his second victory of the season. LaDuc settled for the runner-up spot, while Jack Speshock came on late for third place.

David Boisclair posted the first Sportsman win of his career at Devil’s Bowl in the special 25-lap “Draw Race” for outside invaders looking to earn a spot in the Vermont 200. The race was an interesting one from start to finish with intense battles for the lead. Brian Calabrese jumped out ahead in the opening laps to sail away with the lead, but Jason Gray tracked him down in heavy lapped traffic to take over at lap 13.

Gray seemed to have things under control until Watervliet, N.Y., racer Boisclair came calling. The trio then battled in traffic before Boisclair scooted away, and then Connor Cleveland made a late drive to challenge Gray and Calabrese. When the checkered flag finally waved, Boisclair – a winner last year in the Limited Sportsman class at Devil’s Bowl – had earned the win and the Vermont 200 guarantee.

Cleveland finished second ahead of Calabrese, Gray, and Chad Edwards. Jamy Begor was sixth, followed by Dan Grignon, Derrick McGrew Jr., Derek Bornt, and Ray Hall Jr. Cleveland and Calabrese won the qualifying heats as 20 cars made the call for the Draw Race.

Lacey Hanson scored the most popular win of the night in the 25-lap, $400-to-win feature for the O’Reilly Auto Parts Limited Sportsman division. The Orwell, Vt., racer – a former track champion in the winged 360 Sprint Cars – ran what she described as “the longest race of my life” after several caution flags and restarts slowed the action. She fended off a strong-running Montgomery Tremont at every restart and led all but the first lap, for the first win of her career in a Modified car.

Johnny Bruno charged forward late and nipped Tremont by inches at the finish line – 0.037 seconds on the electronic transponder – for the runner-up finish, while Tremont’s third-place effort was still the best finish of his young career. Scott FitzGerald was fourth with Anthony Ryan fifth. Josh Bussino led the second half of the top 10, followed by Larry Gallipo, Evan Roberts, Austin Comes, and Randy Ryan. FitzGerald, Tremont, and Hanson won the qualifiers as a track record 26 cars entered the Limited Sportsman class.

The Super Stock division drew a season-high 17 cars , and none were better than Jim McKiernan. The former champion from Moriah Center, N.Y., was just as lucky as he was good, though, driving away from a wreck on the opening lap and then holding on despite an electrical problem in his car’s engine that caused almost constant skipping and backfiring.

In a repeat of the Limited class, Bill Duprey took second place in a photo-finish over Andrew FitzGerald by 0.037 seconds after a late-race duel. Matt Mosher finished fourth with Josh LeClaire – who was also in the first-lap crash – in fifth. Curtis Condon, Ronnie Alger, Tyler Irwin, Frank Monroe, and Cam Gadue were next in line.

Rookie Chris Sumner made it back-to-back victories in the Mini Stock division, which drew a massive field of 32 cars. The race was not without its problems, and the 20-minute time limit was reached with just 11 laps completed of a scheduled 20. Ripton, Vt.’s Sumner was very much deserving of the win, though, driving from 18th on the starting grid to the lead in just eight laps.

Kyle Davis Jr. finished a career-best second, and Jake Barrows had his best run of the year in third place. Jarrod Colburn was fourth with Jake Fountain fifth, followed by Michael Daniels, Craig Kirby, Jason Porter – from 30th on the grid – Dustin Towle, and Dick Stone.
Austin Chaves grabbed his fourth win of the season in the Friend Construction 500cc Mini Sprint division. The Chester, Vt., racer steadily worked his way from fifth into the lead by lap 12, and then he drove away from the field for the victory. Rookie Troy Audet posted his third runner-up finish ahead of Kamden Duffy, Cody O’Brien, and Joe Kemp. Samantha Mulready, John Smith, Ray Hanson, Kaidin White, and Eric Wade rounded out the top 10.

The Enduro Series had a massive field of 71 cars for a 50-lap race, and once again it was The Cory Gray Show. The Clarendon, Vt., driver dominated the event to remain undefeated through three Enduro races in 2020. Brent Warren, a regular competitor in the weekly Sportsman Modified division, finished a strong second, and Thunder Road regular Trevor Jaques was third; all three ran the complete 50-lap distance.

Eric Friend and Blaike Condon were fourth and fifth, respectively, each one lap behind the leaders. Donovan White, Dustin Tierney, Kyle Gray, Scott Richner, and Colton Leno completed the top 10 in order. Four red flags stopped the race, including one for a rollover by Jamie Trinci, who was shaken but otherwise uninjured.

The biggest event of the year is next with the Interstate All Battery Center Vermont 200 on September 5-6. The 200-lap main event on Sunday is the biggest Sportsman Modified race in North America, paying $7,500 to the winner plus up to $5,000 in lap leader bonuses. Qualifying and the Vermont 200 are on Sunday starting at 2:00 p.m., along with the Sprint Cars of New England. A full card of action for Devil’s Bowl’s weekly divisions is on Saturday at 5:00 p.m. as well. Tickets are now available online at the Devil’s Bowl Speedway website. 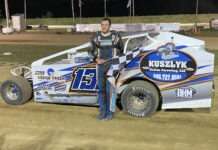