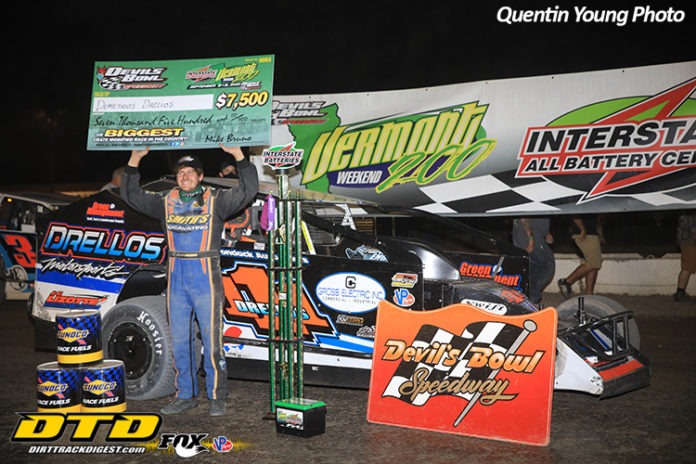 With 89 Sportsman cars on the grounds, qualifying was an intense – but clean and well-driven – affair. Three rounds of preliminary action set the stage through heat races, consolations, and a pair of B-Features for the 34-car starting field. Heat race wins went to Matt Janczuk, Payton Talbot, Mike Fisher, John St. Germain Jr., Robert Bublak Jr., and Zach Sobotka. Consi races were won by Mike Maresca, Michael Wagner-Fitzgerald, and Drellos, and the last-chance B-mains went to Jason Gray and Adam Pierson.

Bublak found himself on the pole position after the Interstate Batteries redraw among the top 12 qualifiers, and with $25 – or more – in bonus cash going to the leader of each lap, he set a strong, steady pace out front. Bublak led the first 84 laps to collect $2,211, and he held off all challengers through seven restarts, but Drellos came charging on the extreme outside lane to make what proved to be the winning pass at lap 85.

A 15-minute competition caution period just after the halfway mark allowed drivers and teams to make adjustments for the second half. Drellos got even stronger, but so, too, did the likes of Janczuk, Maresca, Kevin Root, Tim Hartman Jr., Adam Pierson, rookie Josh Masterson, and several others, which changed the complexion of the race. Bublak, Root, and Janczuk each made serious runs at Drellos’ lead, but the 23-year-old was good enough to pull away each time. A multi-car crash on lap 150 involved Bublak, and when Bublak retired from the race at the final caution period on lap 162.

A 32-lap green-flag run closed out the race, which saw Drellos encounter heavy lapped traffic in the final frames. That, in turn, allowed Janczuk, Maresca, and Root to close in on the leader, all while putting on a thrilling race for the runner-up spot. Drellos, who holds the lead in the weekly Devil’s Bowl championship point standings, ran to the landmark win for his third victory of the season at the Vermont track.

Root, who won the King of Dirt Racing Series event at Devil’s Bowl last month, crossed the finish line in second place but was disqualified in post-race technical inspection for an infraction with his engine’s rev limiter box.

Veteran Sprint Car driver Scott Holcomb notched a big win with the 25-lap Sprint Cars of New England tour. The Granby, Conn., driver started on the outside of the front row and led every lap, but he was never assured of the victory until the checkered flag waved. Cory Sparks and Will Hull were catching Holcomb as the final laps arrived, just as Holcomb reached two-wide lapped traffic.

Hull swung wide to make a move for the lead and briefly drove off the backstretch with two laps to go, and Sparks made a three-wide bid up the middle in the final corner, but Holcomb held on for the win – his first at Devil’s Bowl since an Empire Super Sprint victory on August 4, 1996.

Rookie Troy Audet of Bridport, Vt., was a first-time winner in the Friend Construction 500cc Mini Sprint division, coming out on top of a two-segment, point-scored event held over the two-day Vermont 200 Weekend. Audet won the first 12-lap segment on Saturday, then finished fifth on Sunday for a combined low total score of six points (1st + 5th = 6 points).

Cody O’Brien, Samantha Mulready, and Austin Chaves were next in the official combined finish, each scoring seven total points; the tiebreaker that determined the overall finishing order was the order of the second-segment finish; O’Brien won the Sunday segment over John Smith, Mulready, Chaves, and Audet. Eleven-year-old Kaidin White finished fifth overall with eight points.

Devil’s Bowl Speedway returns to action on Saturday, September 12 with another major event: The Slate Valley 100. Big Block and Small Block Modifieds will return for a 100-lap main event, along with the Northeast Crate Nationals for the King of Dirt Racing Crate Modified Series and the weekly O’Reilly Auto Parts Limited Sportsman division. Tickets are now available online at the Devil’s Bowl Speedway website.