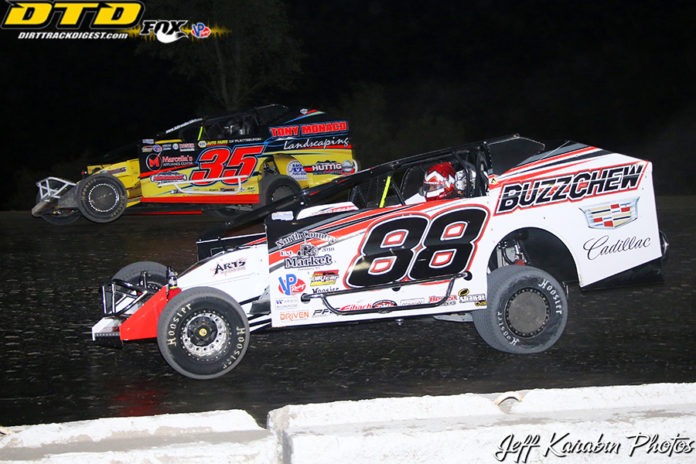 WEST HAVEN, VT – Canadian sensation Mat Williamson has made a habit of winning the biggest and richest dirt Modified races in the country, and he put another notch in his belt at Devil’s Bowl Speedway on Saturday, September 12. “Money Mat” lived up to his nickname with a late-race charge to nail down the inaugural “Slate Valley 100” at the Vermont track and the $10,000 payday that went along with it. Other winners on the all-Modified program included Demetrios Drellos, Evan Roberts, and Bobby Hackel.

St. Catherines, Ont., racer Williamson took billing, but the Slate Valley 100 for Big Block and Small Block Modifieds was anything but a cakewalk for him. Matt Sheppard paced the field early before Mike Mahaney took over at lap 10. Mahaney, the newly crowned champion at Albany-Saratoga Speedway, was solidly in command through the next 60 circuits, fighting off repeated challenges from Sheppard, Jimmy Phelps, and the late-arriving Williamson.

An interesting track surface was mostly slick, but better traction on the extreme inside and the extreme outside lanes created multiple racing grooves and a surplus of slide-jobs as drivers searched for bite. Williamson caught Mahaney in lapped traffic at lap 73, and the final four restarts led to lots of tense moments. Williamson officially snatched the lead away at lap 86 and ran off over the final laps to take the victory.

“This is such a fun track to drive, and I wish we were here more often,” Williamson said following the race; he made his Devil’s Bowl debut in August at the “Battle at the Bowl” event, winning the 25-lap Small Block feature that night as well. Mahaney held on as the runner-up. Sheppard’s up-and-down race saw him slip as far back as sixth, but he rallied to finish third.

Charlie Brown of Brown’s Quarried Slate in Castleton, Vt., presented each of the top-three finishers with commemorative Slate Valley 100 trophies, cut into the shape of the State of Vermont from natural stone found just a few miles from Devil’s Bowl Speedway.
Larry Wight put on the most impressive drive of the event, rebounding from a flat tire at lap 22 to run from 30th place to finish fourth. Tim Fuller outlasted a race-long battle with Ronnie Johnson for fifth place. Demetrios Drellos, like Wight, suffered a flat tire early in the race but came back for sixth place. Erick Rudolph was seventh ahead of Johnson, Anthony Perrego, and Tyler Dippel.

Drellos double-dipped on the action with the King of Dirt Racing (KOD) Crate Modified Series, and he took down a $2,000 victory in the 11th annual “Northeast Crate Nationals” event. The Queensbury, N.Y., driver made it three consecutive wins in Sportsman Modified competition at Devil’s Bowl – all in big races – having won the Charlie LaDuc Memorial 54, the Interstate All Battery Center Vermont 200, and the 50-lap Northeast Crate Nationals.
The KOD event was, by all accounts, a rough race with 14 caution periods, but Adam Pierson and Justin Comes put on a show up front before Drellos arrived. Pierson – who had finished 11th in the Slate Valley 100 moments before – led the first 20 laps. Comes got bounced around in traffic but came to the front using the top lane for the lead at lap 21. Pierson came charging back, though, and regained control at lap 36 after a lengthy side-by-side battle with Comes.

Drellos, meanwhile, had to come from deep in the field, having started 25th after a tough outing in qualifying. He arrived as Comes and Pierson were slugging it out, and he scooted ahead at lap 41 following a restart. Drellos held on through the final three restarts to score the win. Pierson took the runner-up spot, and Tanner Siemons crept into the battle in the final laps to take third place away.

Freshman Modified racer Evan Roberts, 14, collected his third win of the season in the 20-lap feature for the O’Reilly Auto Parts Limited Sportsman division. The race was well-driven, and the fourth-generation driver led every lap after starting on the outside of the front row.
Anthony Warren erased some recent bad luck with a second-place finish, followed by Lacey Hanson, Johnny Bruno, and first-time Devil’s Bowl racer Dylan Madsen. Kevin Groff was sixth ahead of Austin Comes, Josh Bussino, Matt Bilodeau, and Scott FitzGerald. Bilodeau, Roberts, and Hanson won the qualifiers.

The event was capped off by the inaugural “Flying Farmer Dash For Cash” presented by Devil’s Bowl staff member Josh Richards and sponsored by Green Mountain Food & Wholesale and Castleton Corners Deli. The 11-lap race was open to the top 10 drivers in the weekly Devil’s Bowl Pepsi Sportsman Modified championship point standings and was run with “Australian Pursuit” rules in which the last-place driver is eliminated on each lap.
Bobby Hackel drew the pole and led every step of the way, but Drellos put on a show again, coming from sixth place to avoid elimination as he knocked Pierson out before the final two-lap, green-white-checkered run to the finish. Hackel and Drellos mixed it up in the showdown, but Hackel pulled ahead on the final lap for the $1,000, winner-take-all score.
Devil’s Bowl Speedway returns to action on Saturday, September 19, with the next-to-last weekly championship event, presented by The Stove Depot. All five weekly divisions will be on the card including the Super Stock, Mini Stock, and Friend Construction 500cc Mini Sprints. Racing begins at 6:00 p.m. and advance sale tickets will soon be available online at the Devil’s Bowl Speedway website.