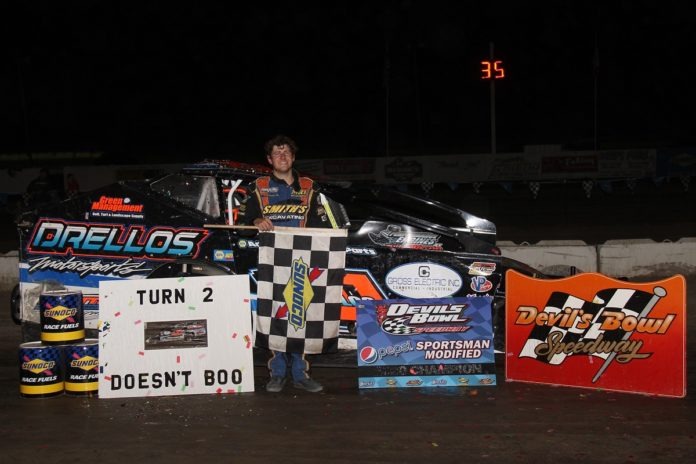 WEST HAVEN, VT – Demetrios Drellos never planned to race full-time at Devil’s Bowl Speedway in 2020, and he certainly did not plan to win the championship. He probably never planned to flip his car while trying to wrap the title up, either, but all of that came to pass on Saturday, September 26 in a Championship Night for the ages.

The headline Pepsi Sportsman Modified delivered a thrilling 35-lap race to close the championship run, with drama throughout the event. Brandon, Vt.’s Joey Scarborough scooted away from the pack at the outset, and a long green-flag run gave him a big advantage. A caution flag bunched the field up and brought North Bennington, Vt.’s Marty Kelly III to Scarborough, and they began to engage in a nail-biting battle for the win.
With nine laps left, though, the whole season turned on its head – quite literally for point leader Drellos. Brent Warren, while running in the top 10, clipped the inside wall in Turn 4 and slid up the racetrack, spinning sideways at the start-finish line. With nowhere to go, Drellos plowed into Warren and was then hit from behind, sending his car into a barrel roll. Drellos attempted to drive his car away, but heavy front-end damage ended his night.

Drellos, who was visibly upset, exited his car on the track surface without the approval of the safety crew – a violation of the track’s rulebook – and he was penalized to last-place in the 24-car field, earning the race-minimum of 10 championship points. The same penalty was applied to driver Alex Bell for a similar infraction in June.

When the race resumed, the Scarborough-Kelly battle got white hot, and the drama of the Drellos crash was intensified with Adam Pierson left in the catbird seat for the title in the final laps.

Kelly drove extremely hard on the outside lane and took the lead on lap 27, but Scarborough never went away. Scarborough got back in front to lead lap 32, but Kelly buried his car into the turns to lead the final three circuits. Incidental contact was made coming off the final corner – the result of good, clean racing – and Kelly scored the first win his career by less than a car length, carrying the colors and No. 357 formerly run by Devil’s Bowl Speedway champion Butch Jelley.

Pierson, however, was unable to advance his position on the track and finished 10th, falling just eight points shy of the title, 752-746. Qualifying heats were won by Scarborough, Vince Quenneville, and Palmer, and Stone won the last-chance consolation round.

The Sportsman Modified division also had its third 25-lap Draw Race feature of the year, giving “outside” racers a chance to shine without having to battle through the weekly handicapping system. Derek Bornt was on his game all night long, and the Poestenkill, N.Y., driver won both his qualifying heat and the feature race. Bornt had a sizeable advantage for much of the race, but David Boisclair tracked him down late and put up an exciting challenge.

The pair raced side-by-side in the final laps – much like Kelly and Scarborough – but Bornt held on for the first Devil’s Bowl win of his career. Boisclair, who won the first Draw Race in August, settled for second. Walter J. Hammond was third ahead of Ray Hall Jr. and Mike Ballestero. Dylan Rabtoy, who won his heat and led the first lap of the feature, finished sixth. John Stowell, Jamy Begor, William August, and Alex Bell rounded out the top 10.
Austin Comes posted the most unlikely victory of the evening, winning the 25-lap feature for the O’Reilly Auto Parts Limited Sportsman division. The Middlebury, Vt., racer was involved in a hard wreck when he spun his car sideways on the opening lap and collected the cars of Evan Roberts and Gary English in a big impact. After pitting during the caution period, Comes returned to the track – with a pair of vise grip pliers holding a broken brake line together – and he began his ascent through the field.

Comes reached leader Anthony Ryan on the 20th lap and made a daring dive into Turn 3 to steal the lead, and then he drove away to a popular win. Ryan was the runner-up, with Johnny Bruno, Lacey Hanson, and John Gosselin in tow; Gosselin impressed by leading two laps and scoring the top-five finish in just his fourth start. Anthony Warren was sixth, followed by Shawn McPhee, Scott FitzGerald, Matt Bilodeau, and Kevin Groff.

Comes, Ryan, and Bilodeau won the heats, and Roberts won the consi. Jeff White drove his car away from a rollover in the early laps and returned to finish 14th.

Bruno, 17, brought his second consecutive Limited Sportsman championship home to nearby Castleton, Vt., on the strength of 12 top-three finishes. Bruno stretched his point lead out in the final weeks, taking a 52-point margin over Warren, 814-762.

The trophy for the Super Stock division’s 20-lap feature went home with a first-time Devil’s Bowl racer, after Hunter Sanchez’s successful maiden voyage to Vermont. A multi-time winner at the Albany-Saratoga and Fonda tracks, the Schodack, N.Y., native started 13th and found himself in the battle for the lead with less than five laps left.

Sanchez pulled to the outside with two laps remaining and took the lead away from Bill Duprey momentarily, but he lost the handle on his car and briefly went off the track in Turn 1 soon after, falling to fourth place. Moments later, Duprey got turned around by second-place driver Bill Fountain, putting him backwards into the wall and putting Fountain to the tail of the field.

A green-white-checkered restart saw Sanchez have a second opportunity, and he made the most of it by pulling away from Andrew FitzGerald for the win. FitzGerald finished second ahead of Tyler Irwin’s Ford F-150 pickup truck, with Josh LeClaire and Jim McKiernan next in line. Fountain and McKiernan won the heats. West Rutland, Vt., racer FitzGerald locked up his first championship driving the same car that his father, Scott, won the title in last year, with a huge 127-point margin over Ronnie Alger, 697-570.

Thirty-one Mini Stocks rolled out for an intense 15-lap finale, and the battle for the win was an entertaining side-by-side run. Former Airborne Speedway champion Josh LaPorte made his trip from Peru, N.Y., worth it as he battled fellow North Country racer Michael “Gilligan” Daniels for a hard-fought victory – his first at Devil’s Bowl – in a photo finish. Chris Conroy finished a solid third ahead of Jarrod Colburn in fourth and a career-best finish for rookie Freddy Burch in fifth. Heats were won by T.J. Knight, Griff Mahoney, and Daniels.

Newport, N.H., native Conroy became the first Granite State racer since 2013 to win a Devil’s Bowl championship in a full-time weekly division. Conroy scored 11 podium finishes and outdistanced defending Mini Stock champion Craig Kirby by 22 points for the title, 638-616. Chris Sumner of Ripton, Vt., was the Rookie of the Year after a three-win freshman season.

Cody O’Brien went out on top in the Friend Construction 500cc Mini Sprint division, by sweeping both the race win and the championship. The 15-year-old Springfield, Vt., racer swapped the lead twice with John McPhee Jr. in the first half of the race, and then he held off a drive by Samantha Mulready through lapped traffic as the laps ticked away. O’Brien held on for his fifth win of the year and his second championship in three seasons.

Mulready was second in the race, followed by Kaidin White, Rookie of the Year Troy Audet, and Kamden Duffy. O’Brien’s margin for the title was 36 points over Austin Chaves, 724-688, and Bridport, Vt., racer Audet beat White for the rookie crown by just 17 markers, 619-602.

The “Fast Lap Challenge” rewarded drivers in each division with bonus cash and gift certificates for turning the fastest single-lap time during the feature races. Sportsman Modified runner-up Joey Scarborough took $150 in bonuses from Competition Carburetion, KillerCrate Racing Engines, and James Osterhoudt for his quick lap of 18.285 seconds. Anthony Ryan won the same amount in the Limited Sportsman class, as did Super Stock winner Hunter Sanchez. Michael Daniels won $100 in the Mini Stock division from Brian’s Lawn Care of Middlebury, Vt., and Green Motorsports posted $100 for the Mini Sprint class, which went to Cody O’Brien.

Additionally, the website www.InsideColoradoWrestling.com – run by Vermont native Tom Blair – put up $50 for “Hard Charger” awards in the Mini Stock and Mini Sprint divisions. Derrick Counter gained 18 positions in the Mini Stocks to earn the money, and Kaidin White’s gain of seven spots was the biggest move in the Mini Sprints.

The Addison County Benefit Pull comes to Devil’s Bowl on Friday, October 2 and Saturday, October 3 with two full days of truck, tractor, and garden tractor pulls. More information including schedules and ticket availability is online at www.AddisonCountyBenefitPull.com.
The 2020 stock car racing season closes with the “Foliage Fun Run” event on Sunday, October 4, with open-competition “run what ya brung” races for all five weekly divisions, plus mechanic races and a 100-lap Enduro. Tickets will soon be available on the Devil’s Bowl Speedway website.