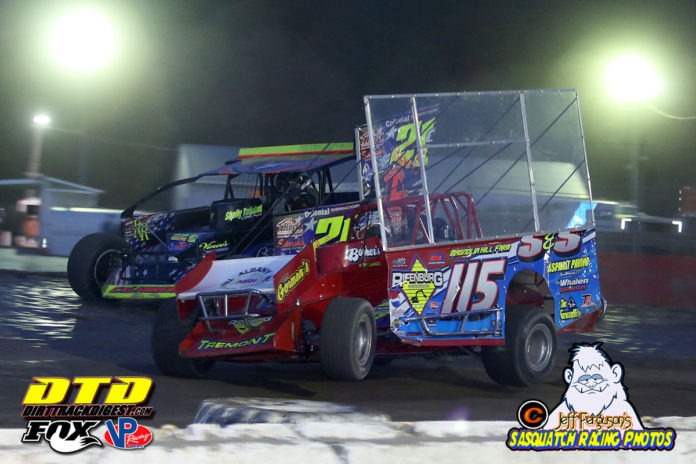 WEST HAVEN, VT – Kenny Tremont Jr. waited until the last minute, but the all-time leading winner at Devil’s Bowl Speedway returned to victory lane for the first time in 2020 at the season’s final event, winning in style with a dominant performance in the “Foliage Fun Run” Open Competition event on Sunday, October 4. The busy, jam-packed program also saw 11 other drivers win including Cody Greene, who topped a wild, 96-car, 100-lap Enduro.

Tremont topped a 17-car field in the “run-what-ya-brung” open competition show for the Pepsi Sportsman Modified division. The 10-time champion’s car ran without a roof, with a small wing on the nose, and a four-foot-tall Lexan sideboard sail panel on the left side of his car, and it was virtually glued to the track every lap it ran.

The West Sand Lake, N.Y., veteran drew the outside pole in his qualifying heat and stormed to the win, and then he led all 25 laps from the pole in the feature for the 89th win of his Devil’s Bowl career. The victory also marked the 100th win at the track for Ken Tremont Sr. as a car owner, dating back to the track’s inaugural season in 1967.

Thirteen-year-old Derrick McGrew Jr. had the best outing of his young career at Devil’s Bowl, running a similar left-side sideboard and dicing for position with many established veterans. McGrew mixed it up all night and finished as the runner-up, holding off Brian Calabrese, whose car ran a tall sail panel above the left-rear quarter panel and an aerodynamic wicker bill across the roof. Justin Comes finished fourth and Frank Hoard III rebounded from an early spin to take fifth place. Mike Ballestero, Brian Whittemore, Marty Kelly III, James Hanson, and William August rounded out the top 10 finishers.

A special “Unlimited Open” division was created for the event, running a no-holds-barred, anything-goes format. The nine-car field was comprised of seven vastly different machines and the race was dominated by the father-and-son team of Floyd and Travis Billington, of South Glens Falls, N.Y., who each drove winged Sprint Cars. Floyd Billington led the first six laps before taking a bad bounce in a rut in the first turn.

Travis Billington took the lead from his father to lead lap 7, but the elder Billington was back in charge by the next circuit and he led the balance of the race. Jim Introne Jr. ran a Small Block “358” Modified with rear sail panels to finish in third place, and 2020 Devil’s Bowl champion Demetrios Drellos ran a conventional Big Block Modified to fourth. Kelly Miller and Brad Shanks were next in a pair of Late Models, followed by the wingless Sprint Car of Matt Collins, the vintage Coupe of Alex Pushee, and the winged Big Block Modified of Randy Howe, which dropped out of the race in the early laps.

Matt Bilodeau dominated the 20-lap Open for the O’Reilly Auto Parts Limited Sportsman division. The Brandon, Vt., racer had Sprint Car wings on the top and front of his car with the roof and right-side quarter panel window removed. Bilodeau led every lap and lapped all but the top five finishers. Johnny Bruno finished second with a conventional body setup, while Scott FitzGerald took third with a pair of rear sail panels. Keith Patnode was fourth in his first Devil’s Bowl start, and Kyle Hoard completed the top five.

Mount Holly, Vt.’s Josh Bussino made a triumphant return to the Super Stock division, winning the 20-lap Open in his first start of the year in the intermediate class. Bussino inherited the lead when Bill Duprey cut a tire during a caution period with seven laps left, but he was a contender throughout the race and held off a late charge from Matt Mosher for the win. Mosher was second ahead of Andrew FitzGerald, Mike Arnold, and Tyler Irwin.

Chris Conroy bookended his championship season with a win in the 20-lap Open Mini Stock feature. The Newport, N.H., won the first two races of the year and then went winless from late June, but he was consistent enough to take the title. Conroy dominated the second half of the race, all the while holding off his nephew, Aaron Bunker, who was the runner-up. Damian Ward led the early laps before falling back in the field, then rebounded to finished third in his first Devil’s Bowl start. Jake Fountain and Wayne Russell Jr. completed the top five.

Eleven-year-old rookie Kaidin White completed a strong finish to his season, winning the Friend Construction 500cc Mini Sprint Open. The 20-lap race was one of attrition, but the Monkton, Vt., youngster clearly had the fastest car and dominated every lap. Austin Chaves finished second in a wingless car after two spins, and he was the only other driver on the lead lap. At the opposite end of the age spectrum, 62-year-old Arnie Kasuba – also a rookie – finished third despite being three laps behind. Scott Bachand was fourth and Cody O’Brien was fifth. Eric Wade was uninjured in a flip into the trees off Turn 2.

Mechanic races were held in the five weekly Devil’s Bowl divisions, as drivers turned their cars over to team members for a chance behind the wheel. Matt Wade won the most exciting race of the series, taking the eight-lap Limited Sportsman race aboard a Billy Lussier machine. Wade avoided a big-time crash by Nick Austin-Neil, who barrel-rolled Brent Warren’s car (and walked away uninjured), and then stole the win from Rusty Bishop by inches at the finish line, officially taking the victory by one-hundredth of a second.

The Enduro 100 was one of the wildest races ever run at Devil’s Bowl Speedway, with 96 cars registered to compete. A total of 11 red flags stopped the rough-and-tumble race, and only 13 cars were running at the finish, but the action was fun and intense. Ferrisburgh, Vt.’s Cody Greene went the distance and scored the win in a Toyota Corolla, beating Brent Wilbur by a full lap with Tom Beshaw in third place, four laps behind. Rocky Francis finished fourth with 94 laps complete, and James Berlinghoff was fifth another lap back. Dean Heffernan, Joe Sherwood, Matt Wade, Michael Alexander, and Aren Keene completed the top 10 in order.

The Foliage Fun Run brought a close to the 54th season of stock car racing at Devil’s Bowl Speedway. News and developments for the off-season will be made in the coming weeks and months including the possibility of a gathering for an awards banquet. For more information, visit www.DevilsBowlSpeedwayVT.com or call (802) 265-3112. Devil’s Bowl Speedway is on Facebook at facebook.com/DevilsBowlSpeedway, and on Twitter, Instagram, and Snapchat at @DevilsBowlSpeed; follow the action using the #DevilsBowl hashtag.