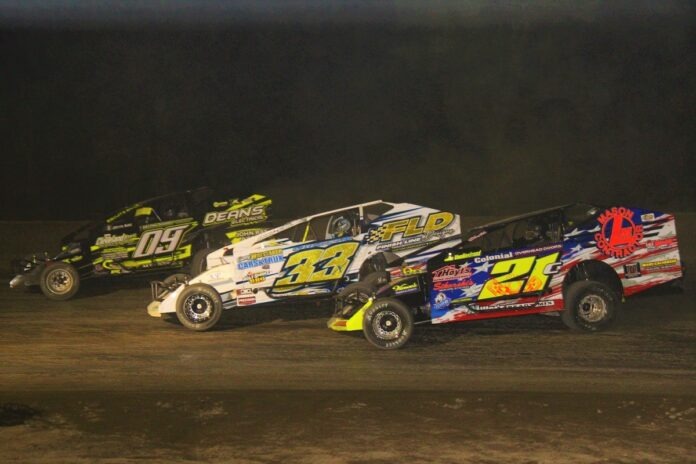 WEST HAVEN, VT – Sportsman Modified dirt racing teams can start planning now to spend their Memorial Day weekend holiday in Vermont. The 12th annual “Northeast Crate Nationals” at Devil’s Bowl Speedway will be one of the biggest events of the year for the popular division, and the new early-season date of May 29-30 will guarantee a huge paycheck for at least one driver before the grind of the summer sets in.

The Northeast Crate Nationals first planted its roots in the fall of 2008 as a showcase event for Sportsman Modified cars using the economical General Motors “602 crate” engine. After bouncing around at three tracks in New York’s Capital District with varying lap distances, the event moved to at Devil’s Bowl last year and was won by eventual track champion Demetrios Drellos.

The new spring date brings with it an all-new, two-day qualifying format, a return to the more traditional 100-lap distance for the main event, and a new record purse paying $5,000 to the winner. The potential for sponsorship opportunities and possible lap leader bonuses will only increase the payout through the 32-car field.

The unique qualifying layout is designed to not only reward Devil’s Bowl’s weekly Saturday-night Sportsman competitors, but to also give plenty of chances to visiting teams that are committed to their home tracks on Saturday night. Ten drivers will lock into the starting field on Saturday night, with 22 spots up for grabs on Sunday.

Tim Hartman Jr. holds the record with three career victories in the Northeast Crate Nationals, winning in 2014, 2016, and 2019. Rocky Warner has won the race twice, and the balance of the win list includes Brian Calabrese, Tim Sears Jr., Ray Zemken, Chad Edwards, defending winner Drellos, and inaugural winner Jack Swinton. Hartman’s second win was worth $2,500, but that payout record is guaranteed to be smashed in 2021.

“The Sportsman Modified division deserves to have major events like the Northeast Crate Nationals,” Devil’s Bowl media director Justin St. Louis said. “Devil’s Bowl has the biggest races and the best payouts for the 602 crate cars, and it will be a treat to see someone earn $5,000 on Memorial Day weekend. That event is building history, and it has a great home here. This year’s race will only elevate the prestige of the Nationals, and it we think it will be a perfect complement to our Vermont 200 in September.”

Competitor registration forms and membership licenses are available, as are season passes for both general admission grandstand seating and the pit area.