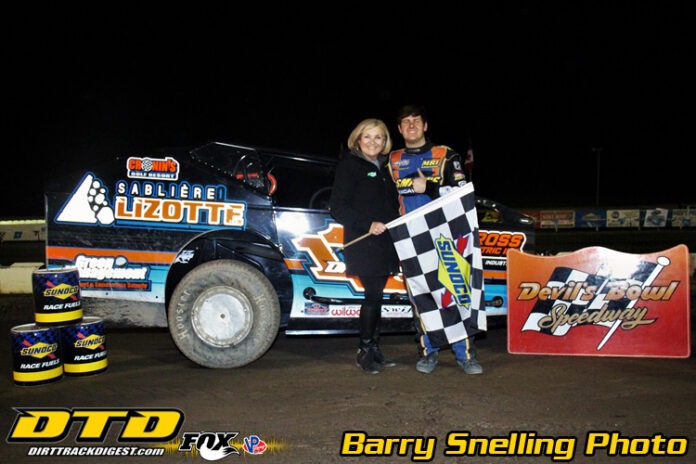 WEST HAVEN, NY – Demetrios Drellos won again at Devil’s Bowl Speedway on Saturday, May 8, but the credit may have to go to his notebook. Drellos readily admitted in victory lane after the Mother’s Day Special event that he had initially missed the setup on the fast, tacky track surface, so he dug into his notes from a race in 2018 searching for a remedy. It worked, and the “Greek Streak” notched his sixth win in his last seven Sportsman Modified starts at the Vermont track, dating back to August of last year.

Also visiting the winner’s circle during the event were Austin Comes, Josh LeClaire, rookie Daryl Gebo, and Kamden Duffy, as well as Jamie Mahoney, who won the ladies-only Spectator Races.

The first half of the 30-lap Sportsman race featured an excellent seesaw fight for the lead between Robert Bublak Jr. and Pat Jones. The pair traded the top spot only twice officially at the start-finish line, but many more times in the corners. A bump in Turn 1 and another in Turn 3, which were left behind by two weeks of rain, made things interesting throughout the field, as several drivers experienced big runs through traffic.

Drellos, of Queensbury, N.Y., started 19th and sliced through traffic to battle for the lead at halfway. He swept past both Jones and Bublak after a restart to lead lap 19, then survived five late restarts to score the win. Veteran Jimmy Ryan had his best showing in years, blasting past both Jones and Bublak to run second and challenge Drellos. Incidental contact with a hard-charging Don Mattison left Ryan in the wall with just three laps left, ending his drive.

Mattison held on for the runner-up position, marking his best finish since a win in 2010 on the former asphalt surface. Adam Pierson fought an evil-handling racecar to finish third. Vince Quenneville came from 15th at the start for his second consecutive top-five finish to open the year. Justin Comes had solid night in fifth.

Austin Comes won the caution-free, 25-lap feature for the O’Reilly Auto Parts Limited Sportsman division, but his race was anything but trouble-free. The Middlebury, Vt., youngster was pointed at the sky with about 10 laps remaining in the race as he made contact with a slowing lapped car, hopped a wheel, and lifted off the track. When he landed, though, he mashed the gas and chased down leader John Gosselin.

Comes dogged Gosselin for a handful of laps but blasted past him to take command for the final four circuits. Gosselin finished second, marking his third top-five finish in the first six races of his career. Larry Gallipo and Evan Roberts each passed many cars on their way to finishing third and fourth, respectively. Polesitter Gary English led six laps and finished fifth.

Beau Reeves, Anthony Ryan, Troy Audet, Scott FitzGerald, and Steve Pope completed the top 10 finishers in order. Heats were won by Roberts, Dakota Green, and Comes. Ryan won the consi, and Jason Quenneville was the lone qualifier out of the B-Main. Thirty-two cars attempted to qualify for 24 starting positions. Comes’ payday for the Limited Sportsman win totaled $550 including a $300 bonus from CRM Specialties in memory of Jim Gill.

Josh LeClaire entered the Devil’s Bowl Speedway record book as a first-time winner in the Super Stock division, nailing down a well-driven, 20-lap race that was slowed by just one caution period on lap 3. Chris Murray led from the outset but never had more than a two-car-length lead as Andrew FitzGerald, Paul Braymer, Mark Norris, and LeClaire each took a shot.

Plattsburgh, N.Y., racer LeClaire finally got by on lap 9 and led the rest of the way, outdistancing FitzGerald, Braymer, Murray, and Norris in that order. Kevin Elliott finished sixth ahead of rookies Chuck Bradford and Andy Botala, with Ronnie Alger and Zach Wood rounding out the top 10.

The Summit Up Construction Mini Stocks provided the wildest race of the evening. A field of 25 unique characters provided a 20-lapper full of exciting passes, mechanical failures, and other interesting moments. Only when the checkered flag waved was it a sure that rookie Daryl Gebo had won the race, making the Orwell, Vt., freshman a perfect two-for-two to begin his racing career; Gebo started 16th and took the lead at lap 8.

Twelve-year-old Kamden Duffy scored his first win of the season in the Friend Construction 500cc Mini Sprints, winning the 15-lap feature. Duffy, of Richmond, N.H., made his way into the lead on lap 4, and then held off opening night winner Ray Hanson for the popular victory. Early leader Kaidin White recovered from an incredible save to take third place ahead of fellow 11-year-old Gage Provencher, making just his second start.

Jamie Mahoney of Bristol, Vt., was the star of the ladies-only Street-Legal Spectator Races. Running one-on-one match races, Mahoney won the finale in a Saturn, beating Jess Lussier’s Honda. Mahoney was awarded a trophy, a lovely basket of flowers, and the applause of the highly entertained crowd.

Devil’s Bowl Speedway returns to action on Saturday, May 15 at 6:00 p.m. with all five weekly divisions and the season’s first wild-and-crazy Enduro Series race. Grandstand admission will be $12 for adults and $5 for children (12 and under). Infield drive-in parking, weather permitting, will be $20 for adults and free for kids. Tickets will be available online at https://buytickets.at/devilsbowlspeedway and at the speedway on race day.