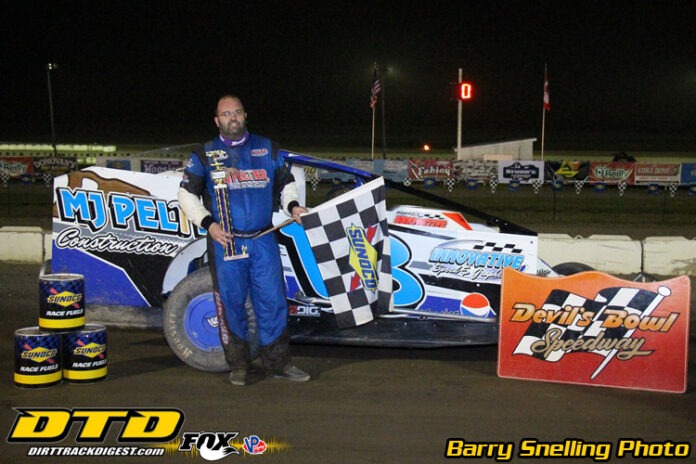 WEST HAVEN, VT – Frank Hoard III was not sure if he was going to race at Devil’s Bowl Speedway on Saturday, May 22, right up until it was time for the Sportsman Modified feature race to begin. Just 30 laps later, though, he was standing in victory lane. The win was the highlight of a five-division card that also included a career-first win by Melvin Pierson and repeat performances by Andrew FitzGerald, Chris Sumner, and Ray Hanson.

Hoard was involved in a devastating crash on opening night, May 1, which saw his brand-new Teo chassis get destroyed in a wild flip. Worse yet, Hoard suffered a back injury that has plagued him since, and he found himself cringing in pain each time he sat in the seat of his well-used backup car.

Having run only heat races for the last two weeks in between visits to the doctor and chiropractor, the Manchester Center, Vt., veteran made the last-minute decision to race Saturday’s feature. He led every lap en route to the 13th win of his Devil’s Bowl career, which is significant in that it matches his family’s longtime car number.

Hoard jumped to the lead from the outside of the front row and set a torrid pace. He reached lapped traffic by the halfway mark, and he then had to simultaneously navigate his way through the back of the field while holding off a furious effort from Marty Kelly III. The race’s lone caution – which came with 21 laps complete – gave Hoard a chance to breathe, and he seized the opportunity to drive away from the pack.

Qualifying heats were won by Jones, Hoard, and Ryan, while Connor Cleveland won the consolation race. As the only driver to finish in the top 10 in each of the first four races, Quenneville holds the early championship point lead over defending champion Demetrios Drellos by 10 points, 158-148; it is Quenneville’s first time leading the standings since his most recent championship in 2017.

Melvin Pierson wrote a new chapter to his own history book by winning for the first time in the O’Reilly Auto Parts Limited Sportsman division. The East Corinth, Vt., veteran survived a rough first-half of the 25-lap race to work his way past Katrina Bean and into the lead just past the halfway mark. Pierson was previously a two-time Coupe champion at Bear Ridge Speedway, and the race was just his fourth start in a Modified-type car.

Craig Wholey, John Gosselin, James Venditti III, Anthony Ryan, and Bob Kilburn rounded out the top 10 in order. Heats were won by Ryan, Kilburn, and Wholey. The consi was won by Larry Gallipo, and Samantha Mulready took a popular win in the last-chance qualifier B-Main.

Andrew FitzGerald electrified the crowd in the 20-lap Super Stock feature with an unlikely victory. The West Rutland, Vt., racer – the division’s reigning champion – was outside the top-five and out of reach of the leaders with just two laps left when the race came completely apart.

Leader Josh LeClaire had battled tooth-and-nail with Chris Murray for most of the race when the first caution flag flew on lap 18. With the field bunched tightly together for the restart, Murray made an incredible four-wide move for the lead, just as LeClaire spun on the backstretch, backing into the wall and flipping his car on its roof; he was not injured.

With another restart following the wild scene, FitzGerald held his foot to the floorboard and stole the win from Murray by about four feet at the finish line. Paul Braymer finished third with Josh Bussino and Mark Norris next in line. FitzGerald’s win is considered unofficial pending the results of an engine inspection.

Ripton, Vt.’s Chris Sumner made it back-to-back wins in the Summit Up Construction Mini Stock division, rambling through the field from 16th starting position to the lead in just five laps. His work was far from over, though, as Tim Simonds and Chris Conroy stayed on Sumner for the rest of the 20-lap race; Simonds led five laps before Sumner regained a razor-thin command for the balance of the event.

Simonds and Conroy completed the podium finishers ahead of Brian Blake and Derrick Counter. The top 10 was completed by Willie Rice, Craig Kirby, Jake Barrows, Lynn Denton, and rookie Austin McKirryher. Freddy Burch was unhurt in a rollover on lap 16.

The Friend Construction 500cc Mini Sprint saw Ray Hanson win for the third time in four races, but the caution-free race was mostly dominated by 11-year-old rookie Gage Provencher. Kamden Duffy, who is not quite 13 yet, reached Provencher in the final four circuits of the 15-lap feature and nosed ahead for the lead with two to go.

The young pair were running side-by-side for the lead at the start of lap 14 when they approached a slower lapped car, pushing it three-wide into Turn 1. Orwell, Vt., racer Hanson, however, had reeled everyone in and saw a hole open just at the right time, threading the needle in a breathtaking four-wide move to blast into the lead. Duffy finished second and Provencher settled for third ahead of Kaidin White and Austin Chaves, who each won a heat.

Devil’s Bowl Speedway hosts a big, two-night Memorial Day Weekend event with the 12th Annual “Northeast Crate Nationals” on May 29-30. Sportsman Modifieds will have first-round time trials and qualifying heats on Saturday night starting at 7:00 p.m., along with qualifying races for all of Devil’s Bowl’s weekly classes. Second-round time trials begin at 6:00 p.m. on Sunday night, followed by consolation races and a last-chance B-Main, as well as weekly division features and the season-opening race for the traveling Sprint Cars of New England tour.

The Sportsman Modified division will race 100 laps for a whopping $5,000 to win on Sunday night, and several drivers from outside the local Devil’s Bowl group are expected to invade for a shot at the big money.

Grandstand admission – which is good for both days – will be $20 for adults and $5 for children (12 and under). Tickets will be available online at https://buytickets.at/devilsbowlspeedway and at the speedway on race day. Infield drive-in parking will be $25 for adults and free for kids, available at the speedway. Pit passes are $35 for members and $45 for non-members.