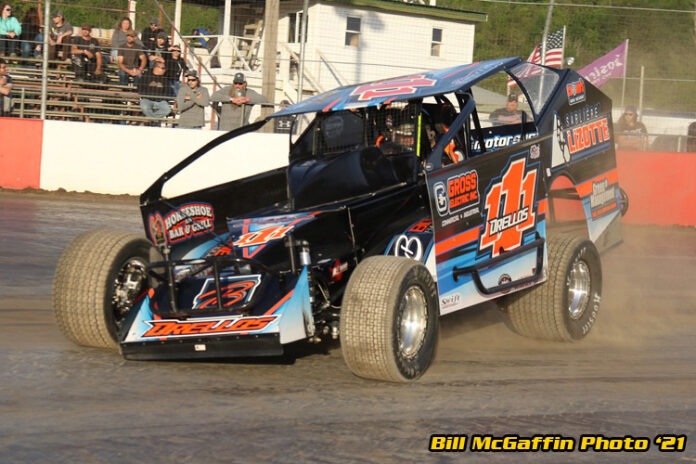 WEST HAVEN, VT – The Top 10 starters are set for the $5,000-to-win Northeast Crate Nationals 100 at Devil’s Bowl Speedway. After Round 1 qualifying was completed on Saturday, May 29, Demetrios Drellos and Robert Bublak Jr. are scheduled to lead the field to the green flag in Sunday’s 100-lap Sportsman Modified main event.

Queensbury, N.Y.’s Drellos – the defending champion of both Devil’s Bowl Speedway and the Northeast Crate Nationals event – turned the fastest lap in group time trials at 18.548 seconds to earn the pole position for Sunday. Ballston Spa, N.Y., native Robert Bublak Jr. was second quick at 18.876 to lock himself onto the front row.

Eight more drivers locked into the Top 10 through four qualifying heat races, which were won by Justin Stone, Elmo Reckner, Adam Pierson, and Alex Bell. After a redraw, positions 3-10 will be filled in order by Don Mattison, Pierson, Tanner Siemons, Frank Hoard III, Bell, Stone, Billy Lussier, and Reckner. The balance of the 32-car field will be set through second-round time trials, consolation races, and a last-chance B-Main. Thirty-eight drivers were on hand for qualifying on Saturday with entries from Vermont, New York, New Hampshire, and Pennsylvania, and several more are expected for second-round qualifying on Sunday.

Two drivers have a shot at a rare Triple Crown, as Bradford and Hanson also won bonus-points semi-features in the Super Stocks and Mini Sprints, respectively; Daryl Gebo won the Mini Stock semi.

Racing is scheduled to begin at 6:00 p.m. on Sunday. In the event of a weather-related postponement, racing will be Monday at 5:00 p.m.; an official decision will be made by 12:00 noon on Sunday.

Grandstand admission is $20 for adults and $5 for children (12 and under). Tickets are available online at https://buytickets.at/devilsbowlspeedway and at the speedway on race day at 4:30 p.m. Infield drive-in parking will be $25 for adults and free for kids, available at the speedway. Pit passes are $35 for members and $45 for non-members.