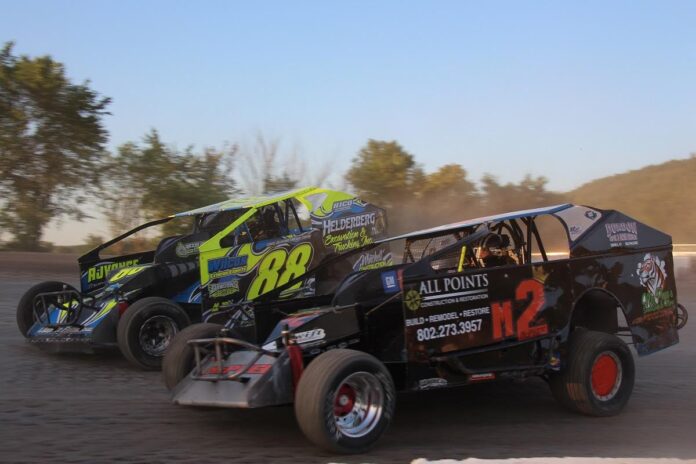 WEST HAVEN, VT – Tanner Siemons made an authoritative statement at Devil’s Bowl Speedway’s Mid-Season Championships on Saturday, July 10, by winning on the half-mile track for the first time in his career and holding off some of the region’s top stars to do it. The Granite Stater headlined a decidedly youthful win list that also included Beau Reeves, Chris Murray, Clemmy Bell, and John McPhee Jr.; at age 30, Murray was the oldest driver in victory lane at the annual double-points event.

Orford, N.H.’s Siemons, who recently celebrated his 20th birthday, was in the hunt for the lead throughout the feature race for the top-tier Sportsman Modified division. He diced with two-time champion Frank Hoard III for two-thirds of the race, with the pair trading the top spot five times officially at the start-finish line, and many more times through the corners.

With caution flags only on the first lap and the scheduled last lap, the battle between was intense in and out of thick lapped traffic under green-flag conditions. Hoard’s car began to fade in the late laps, just as former champions Tim LaDuc and Demetrios Drellos arrived on the scene. LaDuc was making a move outside Siemons as the white flag waved to begin the final circuit on lap 30, but a backmarker slowed in a dangerous area and forced the yellow.

With an extra lap added for the green-white-checkered finish, Siemons and LaDuc squared off on two quick restarts, with LaDuc poking ahead briefly. In the final corner, Drellos swung to the extreme outside lane and was faster than Siemons, but his car slipped out of the groove and that allowed Siemons to pull his Troyer machine ahead for the win as the grandstand crowd rose to its feet for the finish.

Drellos settled for second in the race, but he was arguably the biggest winner of the night as championship rival Vince Quenneville was involved in a spin in the final corner and was knocked from ninth place to 22nd at the finish. With double points on the line for the Mid-Season Championship event, Drellos was able to build a massive 76-point advantage on Quenneville, 564-488; Quenneville previously held the lead by two points entering the race.

LaDuc finished third on the track, followed by Joey Scarborough and rookie Anthony Warren. Mike Palmer was a stout sixth as Hoard dropped to seventh in his first start with a new Teo chassis. Brian Whittemore, rookie Johnny Bruno, and Justin Comes completed the top 10 in order. Qualifying heat wins went to Warren, LaDuc, and Hoard, and the consolation race was won by Mike Fisher.

Beau Reeves, 15, liked his first win so much on Independence Day that he repeated it in the O’Reilly Auto Parts Limited Sportsman division’s 25-lap feature. The Plattsburgh, N.Y., driver started 19th on the field, but before he made his way to the front, the race for the lead was an entertaining one between Scott FitzGerald and unheralded Mike McGinn.

FitzGerald showed the way for the first 17 laps before McGinn reeled him in and made a pass for the lead. McGinn had won his qualifying heat earlier in the night for the first win of any kind in his racing career – which began in the 1970s – but just one lap after he passed FitzGerald and appeared to be headed to an upset feature win, McGinn’s left-rear tire went flat and sent his car spinning. Three quick restarts created some wild action up front, as FitzGerald and A.J. Munger exchanged the lead twice, while Reeves sniffed a three-wide move on two different occasions.

Reeves finally pulled the move off on lap 24 and tried to drive away, but Troy Audet made a last-corner bid like that of Drellos’ in the Sportsman Modified race – and it stuck. Audet pulled around FitzGerald and was right on Reeves as the checkered flag waved. Reeves, Audet, and FitzGerald were the podium finishers, followed by a surging Bob Kilburn and Munger. Alex Layn notched his best finish in sixth, ahead of Justin Lilly, Randy Ryan, Craig Wholey, and John Gosselin.

Heat wins went to McGinn, Audet, and FitzGerald; Reeves won the consi and Gary English took the last-chance B-Main. The championship point race changed from a one-man show into a four-way, 10-point battle, as Austin Comes suffered mechanical trouble and failed to finish the race. The Middlebury, Vt., racer saw his 43-point cushion evaporate down to just eight points, as Comes now leads Reeves 468-460, with Evan Roberts one point behind Reeves and Audet just one point behind Roberts.

The Super Stock division was its typically rowdy self in its 20-lap feature race, with two wrecks before the first lap was completed, and two more near the halfway mark. When the smoke cleared, point leader Chris Murray of Fair Haven, Vt., had his sixth victory of the season in hand.

Andrew FitzGerald was the runner-up with Paul Braymer third and Chuck Bradford fourth. Mark Norris was moved up to fifth place after Josh Bussino was penalized for unsportsmanlike conduct after the race. Murray also won the qualifying heat and leads Braymer by 38 points, 599-561.

Clemmy Bell was a first-time winner in the Summit Up Construction Mini Stock division, with an exciting final-corner pass of Tim Simonds in lapped traffic. The Peru, N.Y., driver bested a field of 31 cars for the victory. Simonds, who led every step of the 15-lap race until Bell’s pass, crossed the finish line in second but was disqualified for an unapproved transmission.

John “Bubba” McPhee Jr. ended a three-year winless drought at Devil’s Bowl in the Friend Construction 500cc Mini Sprint division. The 16-year-old from Rutland, Vt., had suffered almost two full years of mechanical troubles before rebounding recently, and on Saturday he led every circuit of a 15-lap, caution-free race.

Kaidin White challenge McPhee early before Austin Chaves, driving in substitution for rookie Gage Provencher, made a late run at the lead, but McPhee held on. Chaves was second ahead of White, while point leader Ray Hanson finished fourth – his first result outside the top two positions all year. Kamden Duffy rounded out the top five. Heat wins went to McPhee and White. Hanson has a 61-point edge on White in the title chase.

The Community College of Vermont presents the action at Devil’s Bowl Speedway on Saturday, July 17, as the Mohawk Valley Vintage Dirt Modified Series returns to Vermont along with the track’s five weekly divisions. Racing starts at 7:00 p.m.

Grandstand admission is $12 for adults and $5 for children (12 and under). Tickets will be available online at https://buytickets.at/devilsbowlspeedway and at the speedway on race day. Infield drive-in parking will be $20 for adults and free for kids, with tickets available at the speedway; infield parking is open from 5:30 p.m. to 6:50 p.m. 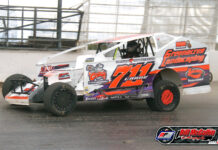 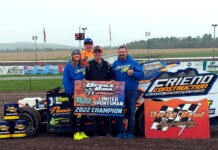