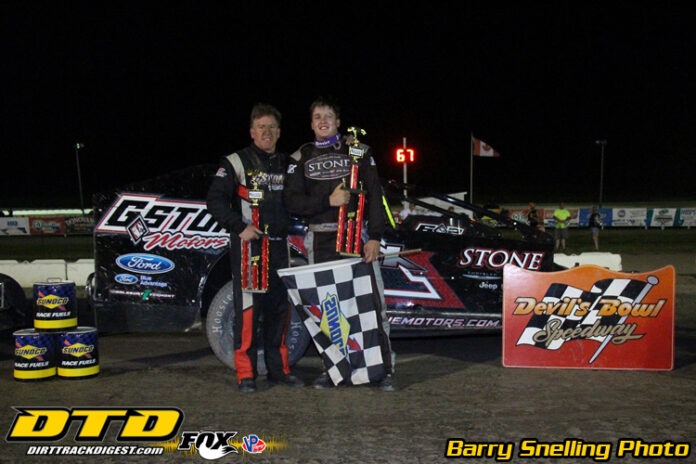 WEST HAVEN, VT – “Legends Night” lived up to the hype at Devil’s Bowl Speedway on Saturday, July 24, as an event that was created to bring back old memories ended up creating some new moments that will forever stand the test of time. A group of local superstars were saluted by the crowd, a legend-in-the-making defeated his three-time champion father, and an all-time favorite added an incredible chapter to the track’s history book.

Prior to the feature races for the evening, a group of more than 30 former champions and star drivers were assembled before the grandstand crowd for an entertaining Legends Night ceremony at intermission. The appreciative crowd welcomed and cheered drivers from Devil’s Bowl Speedway’s past, present, and apparent future, ranging in age from 80 to 15, and representing more than 40 track championships and nearly 650 feature wins.

In the main event, the Stone family had its work cut out, with Justin Stone starting 17th on the field and three-time champion Todd Stone starting 20th. Underdogs Jason Bruno and Adam Piper enjoyed the spotlight early, and Morrisonville, N.Y., racer Bruno appeared to be headed for an upset win when his engine expired on lap 17. Piper led the next handful of laps before Frankie Hoard III and Tim LaDuc arrived up front.

Hoard had stalked Bruno and Piper for several laps and took command briefly, but LaDuc swept three-wide around everyone on the extreme outside lane to grab the lead. LaDuc – second on the track’s all-time win list with 54 victories – ran away from the pack for several laps, but veteran driver Don Mattison tracked him down just after the halfway mark to steal the lead. As they approached lapped traffic, LaDuc got back on his horse and jumped back ahead at lap 42.

LaDuc once again seemed to be in control, but Justin Stone began to percolate and ripped through the field in the second half of the race. He arrived quickly at LaDuc’s back bumper, and then swung past him with just nine laps remaining to get out front. Todd Stone, making only his third start of the year, caught LaDuc in the final five laps and won the battle for the runner-up spot for an overwhelmingly popular 1-2 family sweep.

LaDuc settled for third ahead of Mattison and championship point leader Demetrios Drellos. Justin Comes was sixth with rookie Johnny Bruno seventh. Vince Quenneville, Tanner Siemons, and Mike Palmer completed the top 10 in order. Qualifying heats were won by Siemons, LaDuc, and Todd Stone. Drellos has a comfortable 81-point cushion on Quenneville in the title standings.

The O’Reilly Auto Parts Limited Sportsman division once again dazzled the crowd, but the true highlight of the night came in the last-chance B-Main qualifying race. With only the winner transferring to the 24-car feature, the hero was 79-year-old Frank Hoard Sr., of Manchester Center, Vt., who came out of retirement to serve as a substitute driver for Bryon Linendoll. Hoard ran side-by-side with John Gosselin for most of the 10-lap race before pulling ahead in the last two laps to take the win. The crowd roared with a standing ovation at the checkered flag, and again when Hoard was introduced during the Legends Night ceremony.

In the 25-lap feature, Middlebury, Vt.’s Austin Comes shrugged off the memories of a tough Mid-Season Championship outing at the previous race to score his third win of the season and rebuild his point lead. Mike McGinn was once again the star for much of the race, leading the first 16 laps before Comes beat him on a restart.

Dakota Green crossed the finish line in second place, but his finish is considered unofficial pending the results of an engine inspection. Evan Roberts drove from 21st starting position to finish third after a good battle with Justin Lilly in the closing circuits. Anthony Ryan was fifth behind Lilly, followed by McGinn, Melvin Pierson, Troy Audet, Craig Wholey, and Scott FitzGerald. Qualifying heats were won by Alex Layn, McGinn, and Gary English, and Audet won the consolation.

Fair Haven, Vt.’s Chris Murray continued his domination of the Super Stock division, running to his seventh win of the year. Cautions on the first two laps thinned the field and got Murray in quick contention for the lead, which he ran away with for most of the race. As he approached lapped traffic late in the going, however, former champion Jim McKiernan tracked Murray down and finished hot on his heels.

Andrew FitzGerald was third ahead of Paul Braymer and Mark Norris. Rookie Chuck Bradford was sixth, and Zach Wood, Wayne Gaige, Tony Salerno, and Ronnie Alger completed the top 10. Braymer and Murray won the heats. Murray’s win was the 32nd of his career at Devil’s Bowl and gives him sole possession of 11th place on the track’s all-time win list.

The Summit Up Construction Mini Stock division had another huge turnout with 34 entries, but that proved to be of little concern to Ripton, Vt.’s Chris Sumner, who earned his fifth win of the year. Sumner started 16th on the field and took the lead just before the halfway point before storming off to the victory.

Chris Conroy was the runner-up ahead of Brian Blake, rookie Daryl Gebo, and Willie Rice; each came from deep in the field. The second half of the top 10 was rounded out by Craig Kirby, Clemmy Bell, and rookies Scott Chandler, Austin McKirryher, and Chase Allen.

Devil’s Bowl Speedway is back in action on Saturday, July 31, with a wild-and-crazy 50-lap Enduro Series race, along with the track’s five weekly divisions. Racing starts at 7:00 p.m. Grandstand admission is $12 for adults and $5 for children (12 and under). Tickets will be available online at https://buytickets.at/devilsbowlspeedway and at the speedway on race day. Infield drive-in parking will be $20 for adults and free for kids, with tickets available at the speedway; infield parking is open from 5:30 p.m. to 6:50 p.m.

Did Not Start (1 driver): Chris Hewitt