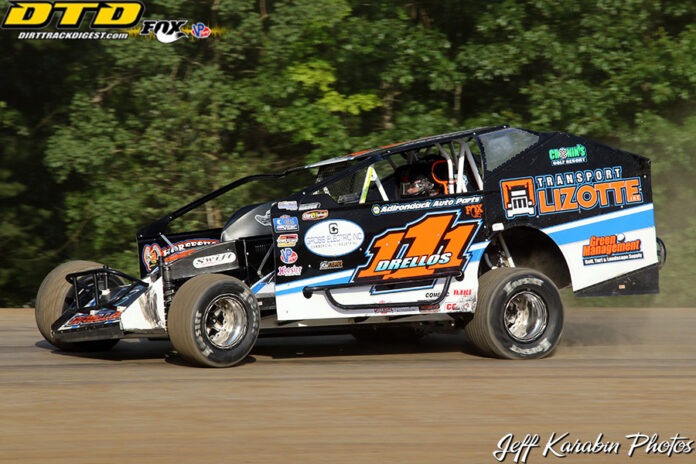 WEST HAVEN, VT – Devil’s Bowl Speedway has announced that two drivers from its Sportsman Modified division have been penalized following a pair of related incidents on Saturday, July 31.

Joey Scarborough and Demetrios Drellos were competing for second place in the 30-lap feature race on Saturday night when Drellos made contact from behind with Scarborough’s car, resulting in both cars spinning off the track and crashing. Drellos pulled his car out of the race immediately after the incident, but he would not have been allowed to continue had he tried to return.

For his unsportsmanlike conduct, Demetrios Drellos has been placed last in the finishing order of the race (26th place) and will receive a 50-point penalty in the weekly handicap. Drellos has also been suspended from competition for one (1) race at Devil’s Bowl Speedway and will not be eligible to compete on Saturday, August 7. He will be allowed to return for the “Battle at the Bowl” event on Sunday, August 8.

Following the race, Joey Scarborough entered the pit area and intentionally drove his car toward the Drellos pit stall at a high rate of speed, narrowly missing several pedestrians before ramming into the parked racecar of Justin Stone. Scarborough then attempted to reverse his car and change directions before several people including Devil’s Bowl Speedway owner Mike Bruno intervened, stopping Scarborough’s car from moving. Scarborough then exited his car and a scuffle ensued with several bystanders.

For his actions and for actions detrimental to motorsports, Scarborough and several of his team members have been suspended from Devil’s Bowl Speedway indefinitely and will not be allowed on the speedway’s property for the foreseeable future.

“Joey Scarborough ran a great race, and he got a raw deal from another competitor on the track,” Bruno said. “But that is for us to handle as officials. There is no excuse for the way that he acted on pit road, and he was totally out of control. The incident was captured on our security cameras, and the Scarborough car missed hitting a pedestrian by less than a foot before hitting the Stone car. It was terrifying and it was completely unnecessary. There is no place for that here at Devil’s Bowl Speedway or anywhere else in stock car racing.”

Devil’s Bowl Speedway has a huge two-event weekend ahead on August 7-8. Friend Construction presents “Fan Appreciation Night” on Saturday at 7:00 p.m. Spectators will be admitted to the grandstands for just $5 and to the infield drive-in for just $15 each. Kids aged 12 and under will be free in both the grandstands and the infield, and the annual “Kids Racecar Rides” will take place at intermission. Pit passes are $25 for members and $35 for non-members, and all five weekly divisions will be in action.

On Sunday at 5:00 p.m., the biggest stars in Northeastern dirt Modified racing will be in town for the third annual “Battle at the Bowl” event for Big Block and Small Block Modifieds. Twin 25-lap features each paying $1,500 to win will determine the starting field for 50-lap Main Event, which pays $10,000 to the winner. The weekly Sportsman Modified, Limited Sportsman, and Mini Stock divisions will also be in action. Grandstand admission is $30 for adults and $5 for kids; infield admission is $40 for adults and free for kids 12 and under. Pit passes are $45 for all persons aged 10 and up, with no one under 10 allowed in the pits, per Vermont State Law.

Pre-sale tickets for both events are available online at https://buytickets.at/devilsbowlspeedway and will be available at the speedway on race day.