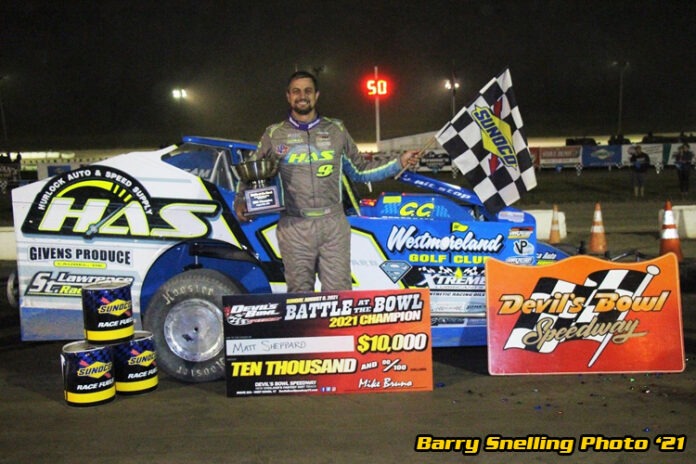 WEST HAVEN, VT – Matt Sheppard turned a bad start into a big night at Devil’s Bowl Speedway on Saturday, August 15. “Super Matt” – regarded as one of the greatest dirt Modified drivers of all-time – rebounded from poor results in qualifying to pocket $10,000 in the third annual “Battle at the Bowl” in record fashion.

It took Sheppard just 15 minutes and 56 seconds to win the caution-free, 50-lap “Battle” Main Event, which was the finale of a unique race format that saw 36 Big Block and Small Block Modified cars attempt to qualify for 26 starting spots through a series of time trials, heat races, preliminary 25-lap feature qualifiers that each paid $1,500 to win, and a last-chance qualifier. The Waterloo, N.Y., driver was only seventh-best out of nine drivers in his time trial group, and he could muster only a sixth-place finish in his heat, leaving him to start 12th in his 25-lap feature. Heat wins went to Mike Mahaney, Anthony Perrego, Tim Fuller, and Stewart Friesen.

Middletown, N.Y.’s Perrego – the defending “Battle at the Bowl” champion – started the first 25-lapper in fifth place and quickly worked his way up to pass Jessey Mueller for the lead on lap 6. Sheppard, meanwhile, put on a passing clinic by driving through traffic all the way up to the runner-up position. Perrego scored the victory, but he blew his Small Block engine at the finish and was forced to start the 50-lap Battle in last place after switching to a backup car. Mahaney, Mueller, and Adam Pierson completed the top five, and as the only three drivers to enter a car into each feature, they each had a chance to improve their starting position in the Battle finale.

Friesen led all but the opening circuit of the second 25-lap feature, but the Niagara-on-the-Lake, Ont., native had his hands more than full of Mahaney in the final moments of the race. Mahaney fought past Demetrios Drellos at mid-race and then chased down Friesen and draw even with him on the inside lane in the last two laps. Friesen narrowly held on for his first feature win at Devil’s Bowl with Mahaney just a car-length back at the finish. Drellos, Pierson, and Fuller rounded out the top five. Brian Berger then won the last-chance qualifier race.

Sheppard drew the pole position for the 50-lap Main Event with Friesen on the outside of the front row, and they ran 1-2 the entire distance. With the race-long green-flag run and no time to relax, Sheppard began lapping cars just 10 circuits into the race, and he survived several hairy three-wide moments including one on lap 12 that turned his car sideways after contact with Allison Ricci.

From there, though, Sheppard was able to stretch out to a comfortable lead and beat Friesen by 3.417 seconds. Drellos, Mahaney, and Pierson put on an entertaining fight before finishing in that order to complete the top five. Fuller was sixth ahead of David Marcuccilli and Michael Maresca, who was the last driver on the lead lap. Rocky Warner and Kenny Tremont Jr. completed the top 10, each one lap behind Sheppard’s torrid pace.

Immediately following the race, Devil’s Bowl Speedway promoter Mike Bruno announced that each driver would receive a $100 bonus for running the 50-lap race without a caution flag.

Drellos and Pierson had more work to do immediately after the 50-lapper, though, as they strapped into their Saturday-night Sportsman Modified cars to compete in Devil’s Bowl Speedway’s weekly championship feature, sweeping the top two finishing positions.

Rookie Anthony Warren took the lead from polesitter James Hanson on the second lap and held onto command under another long green stretch until Pierson arrived. A sensational duel saw them officially trade the lead three times in just five laps before Pierson was able to scoot away, but Drellos powered past Warren and reached Pierson on lap 28 to take control.

The race’s lone caution flag on lap 30 did nothing to stall the pace of Drellos, and he ran away in the final dozen trips to grab his sixth Sportsman win of the year at Devil’s Bowl. Pierson’s runner-up finish gave him four top-five efforts in all four feature races that he ran during the night. Justin Comes had a late rally to finish third ahead of Don Mattison, and David Boisclair took fifth in a rare Vermont appearance.

The top 10 was completed by Josh Masterson, Tim LaDuc, Elmo Reckner, Mike Fisher, and Warren, whose car faded after the caution flag. Heats were won by Drellos, Comes, and Billy Lussier, with Reckner taking the consolation and visiting Drew Cormie grabbing the B-Main to transfer into the feature race. Unofficially, Drellos leads Comes by 28 points for the title, 673-645.

The O’Reilly Auto Parts Limited Sportsman division was split into two 20-lap feature races, and each thrilled the crowd. The first race was dominated early by A.J. Munger and then Timmy Aldrighetti, but Bridport, Vt.’s Troy Audet seized his opportunities with two late caution flags.

First-year Modified racer Audet and ran from the 12th starting position to eventually pass Bob Kilburn for second place and then pounce at the final restart to steal the lead. The win was his second of the year; Kilburn finished second with Aldrighetti third and Josh LeClaire fourth – career-bests for each. Dylan Madsen was fifth.

Katrina Bean of nearby Benson, Vt., brought the house down in the second race by scoring her first win. Cody O’Brien led the first eight laps before Bean made the winning pass, and she pulled away from the field during the balance of the caution-free race for a wildly popular win. Bean, 20, joins Lacey Hanson as the only two women to win in open-wheel Modified competition in Devil’s Bowl Speedway’s 55-year history; Bean and her mother, Bobbi, are also past winners in the Mini Stock division.

Evan Roberts finished second in the race after a late fight with Bill Duprey. Randy Ryan was fourth and Justin Lilly took fifth place. Unofficially, Audet took the Limited Sportsman championship lead away from Austin Comes by four points, 639-635, with Roberts just 15 points behind Audet at 624.

The Summit Up Construction Mini Stock division also ran split 15-lap features to close out the evening. Leicester, Vt.’s Derrick Counter ended a winless stretch of more than four years in the first race by grabbing the lead from teammate T.J. Knight and then holding off five-time feature winner Chris Sumner in a great battle. Rookie Chase Allen finished third to repeat his Saturday night performance, followed by Knight and Scott Chandler.

Orwell, Vt., rookie Daryl Gebo completed his perfect weekend in the nightcap, winning the second feature to match his Saturday victory. Gebo stalked leader Jake Barrows in the second half of the race, making the winning pass as they entered the final lap. Barrows settled for second with rookie Josh Ostertag a career-best third. The father-son team of Willie and Kaydan Rice completed the top five.

Devil’s Bowl Speedway returns to action on Saturday, August 21 at 7:00 p.m. as 2nd Amendment Shooting Supplies of Brandon, Vt., presents double features for all divisions. Grandstand admission is $12 for adults and $5 for children (12 and under). Tickets will be available online at https://buytickets.at/devilsbowlspeedway and at the speedway on race day. Infield drive-in parking will be $20 for adults and free for kids, with tickets available at the speedway from 5:30 p.m. to 6:50 p.m. on Saturday.

Pit passes are available at the speedway or on the “Pit Pay” Mobile App; the minimum age in the pit area is 10 years old, with proof of age required for minors, per Vermont State Law. Pit passes are $25 for members and $35 for non-members.

OFFICIAL RESULTS – “Battle at the Bowl”