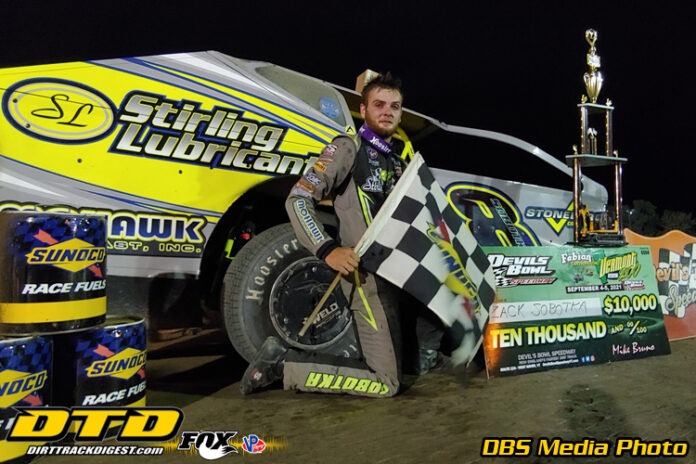 WEST HAVEN, VT – Zach Sobotka was already having a dream weekend when he arrived at Devil’s Bowl Speedway on the morning of Sunday, September 5, and he headed home with an even bigger highlight and a huge paycheck. The 26-year-old opened his Labor Day holiday weekend by winning at Brewerton (N.Y.) Speedway and clinching that track’s Sportsman Modified championship on Friday night, and he wrapped it up by capturing the Fabian Earth Moving Vermont 200 and pocketing $12,942 in winnings on Sunday.

The day did not start well for the Parish, N.Y., driver, who turned in only the 27th-fastest lap on a dry-slick track in time trial qualifying. He lined up seventh in his heat race and missed a transfer finishing position, having to go through the consolation round, just before a rain delay interrupted the program.

The full-blown rain showers stopped, but a fine mist fell sporadically for the rest of the event, changing the track conditions dramatically. Sobotka started the 200-lap main event 23rd on the 36-car grid, and he took his time weaving his way through the field as Dylan Zacharias and then Adam Pierson took turns in the lead.

Mother Nature caused a delay again at lap 80, with bouts of mist turning dust from the racing surface into tiny bits of sticky, vision-hampering mud; the drivers were brought to pit road to clean their helmet visors and apply new tearoffs, returning to race another 21 circuits before a predetermined competition break at lap 101.

Demetrios Drellos took the lead from Pierson at the restart and built a large lead before the halfway break, but a fuel leak from a vent tube on the Drellos car was seen during green-flag racing when the race resumed. The caution flag was flown at lap 103 and officials pulled the car aside to inspect it, but they found no leak while the car was not in motion. Drellos was given the option to pit and fix the leak or risk being black-flagged if the leak reappeared under racing conditions; he chose to stay on the track as the leader, but the leak returned and Drellos was sent to pit road under green at lap 108.

Sobotka told the crowd in a pit road interview during the break that his car was handling perfectly, and he restarted in seventh place. He took the lead from weekly Devil’s Bowl competitor Tim LaDuc at lap 126 and then set a blistering pace after the 12th and final restart at lap 138. The long, 62-lap green-flag run to end the race was a memorable one; Sobotka threaded his way through lapped traffic as Marc Johnson began chasing him down. Sobotka managed the traffic well, but a side-by-side battle for 12th-place between Frank Hoard III and Michael Wagner-Fitzgerald running in front of him slowed his pace in the final 15 laps, allowing Johnson to close dramatically.

Guilderland, N.Y., racer Johnson made two very strong bids for the lead and pulled even with Sobotka twice in the final frames, but Sobotka was able to fend him off for the landmark victory. Sobotka – who raced for the second half of the event with blurred vision after getting dirt in his eyes – claimed the $10,000 winner’s purse, $2,892 in lap leader bonuses, and the $50 Hard Charger Award for a total take of $12,942.

Qualifying heats were won by Jimmy Ryan, Bobby Hackel, Pierson, Johnny Bruno, Johnson, and Corcoran. Sobotka and Bushaw split the consi victories, and last-chance B-Mains were won by Josh Masterson and Travis Bruno. Sixty-two drivers attempted to qualify for the race, and Sobotka became the first driver in the event’s four-year history to win as a “true” Sportsman racer, without having ties to Big Block or Small Block Modified competition; previous winners were Brett Hearn, Rocky Warner, and Drellos.

The Sprint Cars of New England tour supported the event with a fast-paced 25-lap feature to wrap up its three-race Devil’s Bowl track championship chase. North Granby, Conn.’s Scott Holcomb arrived at Devil’s Bowl Speedway so late that he missed his qualifying heat race, but with no preparation he needed only five laps to drive from last place on the grid to get to second.

A wild initial start saw Holcomb blast three-wide on the outside lane past four cars. He quickly made it up to the runner-up position and when leader Adam Pierson’s car shut down on lap 7, Holcomb inherited the top spot and sailed off with the win; he also won on Vermont 200 Weekend in 2020.

Chris Donnelly finished second, but he blew his engine in the final corner of the race and coasted across the line. Former Sportsman Modified competitor Wayne Stearns was ultra-competitive all day in his first Sprint Car start on the Devil’s Bowl half-mile, finishing third.

Barnstead, N.H.’s Clay Dow finished fourth to clinch the Devil’s Bowl track title by just four points over Donnelly, 142-138. Floyd Billington finished fifth in the race. Heats were won by Donnelly and Jake Williams; Caleb Lamson walked away unhurt from a vicious hit into the frontstretch wall and subsequent rollover in qualifying.

The Friend Construction 500cc Mini Sprint division ran a two-day, three-round “segment” format during the weekend, with the second and third 10-lap legs run on Sunday. Orwell, Vt.’s Ray Hanson picked up segment finishes of third and first on Sunday, and when combined with his third-place showing on Saturday, his low total score of 7 points (3+3+1=7) gave him the overall victory – his 10th of the season.

Hanson used a bone-stock, spare engine borrowed from overall runner-up John Smith for the win. Smith won the opening segment on Saturday and racked up a sixth and a second on Sunday to earn a total score of 9 points. Kaidin White was fifth, first, and fifth in the segments to tally 11 points and take third place overall. Roger LaDuc (13 pts.) and Scott Bachand (17 pts.) completed the overall top five.

Devil’s Bowl Speedway is back in action on Saturday, September 11, at an earlier start time of 6:00 p.m., with the return of Heritage Family Credit Union “Member Night” and free general admission for all HFCU members who present a valid HFCU credit or debit card, checkbook, or bank statement. Devil’s Bowl Speedway’s five weekly divisions will be on the card.

Pit passes are $25 for members and $35 for non-members, available at the speedway or on the “Pit Pay” Mobile App; the minimum age in the pit area is 10 years old, with proof of age required for minors, per Vermont State Law.