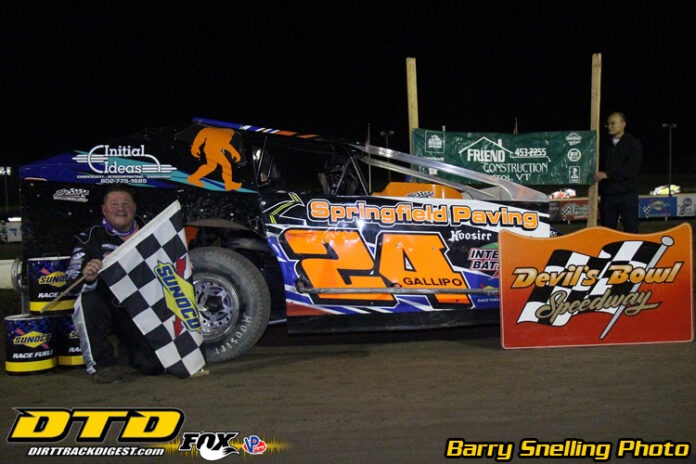 WEST HAVEN, VT – Jimmy Davis had won at Devil’s Bowl Speedway before, but please forgive him if he had to ask for directions to victory lane – it had been a while. The Amsterdam, N.Y., racer scored the main event win on a decidedly bizarre Friend Construction Night on Saturday, September 18, for his first win at the track in 24 years. After two rain delays and a two-hour electrical outage – which was happily filled by the annual Kids Racecar Rides event – Davis and five other drivers earned wins as two were crowned track champions.

Davis got a taste of victory a week earlier when he led the first half of the Sportsman Modified division’s 30-lap feature, only to settle for the runner-up spot. He was not to be denied this time, though, reversing his role in the Friend Construction race to take command in the second half of the race and fending off hungry underdog Mike Fisher for the win.

The last time Davis stood in the winner’s circle at Devil’s Bowl was on June 15, 1997, before fellow Sportsman drivers Tanner Siemons, Marty Kelly III, and Shawn McPhee were born. He dedicated his win to his late crew chief Dave “Moon” Gregorek and thanked car owner Larry Gallipo, who put Davis in his car for the first time just five weeks earlier; Gallipo also won a pair of races in 2021 with veteran Elmo Reckner driving a second car.

Fisher’s performance was the best of his career, as he led the first 15 laps and finished a best-ever second. Jimmy Ryan continued a late-season hot streak in third, followed by a career-best fourth-place effort from sophomore driver Adam Piper. Rookie Anthony Warren was fifth, followed in order by Brian Whittemore, Vince Quenneville, Justin Comes, Frank Hoard III, and Siemons.

Qualifying heats were won by Davis, Ryan, and Josh Masterson. Comes opened up his championship lead to 18 points over Tim LaDuc, who struggled and finished 12th in the race. Despite being winless in 2021, the ultra-consistent Comes leads 893-875 with two races remaining as he seeks his first track championship.

Austin Comes, younger brother of the Sportsman point leader, tightened up his own championship battle in the O’Reilly Auto Parts Limited Sportsman division by capturing his fourth victory of the season in a 25-lap race. The Middlebury, Vt., racer clamored from 16th starting position to grab the lead from Gary English on the 18th circuit and speed away. A late caution flag set up a green-white-checkered, two-lap shootout to the finish, but Comes held off all challengers.

Randy Ryan crossed the finish line in second place but was disqualified for failure to register his repaired General Motors “602” crate engine and refusal to remove the engine for inspection. That bumped Evan Roberts up to the runner-up finish ahead of Bill Duprey, Alex Layn, and Anthony Ryan. Troy Audet could never work his way out of traffic and finished sixth ahead of John Gosselin, Beau Reeves, Bubba McPhee, and Cody O’Brien.

Fair Haven, Vt.’s Murray ran a conservative race to finish third for his 16th podium result in 20 races. Murray won 11 times during the year to take his third Super Stock championship, beating Braymer by 46 points, 1,030-984. Josh Bussino and Andrew FitzGerald completed the top-five in the race, and Rookie of the Year Chuck Bradford of Addison, Vt., was sixth. Tony Salerno, Mike Bussino, Tyler Irwin, and Don Williams rounded out the top 10. Josh Bussino and Chris Murray won the heats.

The Mini Stock division turned in another entertaining – if somewhat rambunctious – 15-lap “A” Feature. After seven caution periods including one that extended the race to 16 laps with a green-white-checker finish, Brandon, Vt., rookie Mark “Cousinbrother” Mahoney notched his second win, beating Brian Blake in a photo finish by just 0.074-seconds at the finish line.

Joe “One Lap” Malzac needs a new nickname after posting a popular win in the Mini Stock “B” Feature. The East Middlebury, Vt., racer led all 10 laps of the race for his first win in 34 years of trying, and he earned big congratulations from his fellow racers. Cody Dion, Donald Olden, Damian Olden, and Adam Mahoney – all rookies – completed the top five.

Orwell, Vt.’s Ray Hanson capped off his incredible championship season in the Friend Construction 500cc Mini Sprints by matching Murray’s feat of 11 wins. Hanson took the lead from Scott Bachand on lap 4 and ran away, winning the division’s final point-counting race by 4.544 seconds over Kamden Duffy.

Kaidin White, John Smith, and Roger LaDuc were next in line, followed by Bachand, Rookie of the Year Gage Provencher – age 11 – and Tommy Kasuba, Kris Severance, and Charlie Weatherwax. White and Hanson won the heats, and Hanson scored a 68-point margin of victory in the championship over 12-year-old White, 1,074-1,006.

Big Block and Small Block Modifieds return to Devil’s Bowl Speedway on Sunday, September 26 at 4:00 p.m., with the second annual “Slate Valley 100” paying $10,000 to win. The Sportsman Modified division will have a 40-lap, $2,000-to-win “draw” race, and the Limited Sportsman and Mini Stock divisions are also in action.

Special event grandstand general admission is $25 for adults and $5 for children aged 12 and under. Tickets are available online at https://buytickets.at/devilsbowlspeedway and at the speedway on race day. Infield drive-in parking is $35 for adults and free for children. Infield passes are sold only at the track on race day. Pit passes are $45 per person, available at the speedway or on the “Pit Pay” Mobile App; the minimum age in the pit area is 10 years old, with proof of age required for minors, per Vermont State Law.