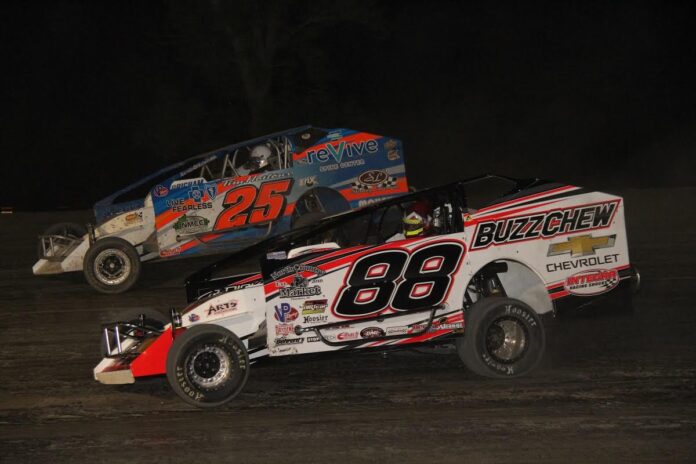 WEST HAVEN, VT – The biggest names in dirt Modified stock car racing are returning to Vermont for just the second and final time in 2021. Devil’s Bowl Speedway hosts the second annual “Slate Valley 100” on Sunday, September 26 at 4 p.m., and the stars are committing to the race, chasing after the $10,000 top prize.

Canadian driver “Money Mat” Williamson won the inaugural Slate Valley 100 last year after a late pass for the lead. Williamson lamented missing the rescheduled rain date for the “Battle at the Bowl” event in August, so the St. Catherines, Ont., racer plans to make up for lost time by fielding the potent Buzz Chew Racing No. 88 entry – the same car that won him $10,000 last year.

Anthony Perrego has had a dream season in 2021, with his Superior Remodeling No. 44 team sweeping the Big Block and Small Block track championships at Orange County Fair Speedway in his hometown of Middletown, N.Y., and the Modified title at Albany-Saratoga (N.Y.) Speedway. Perrego’s history at Devil’s Bowl is short but sweet; he won a 25-lap preliminary feature at the 2021 Battle at the Bowl, and he won that race’s 50-lap main event in 2020.

Ten-time Devil’s Bowl track champion Tremont will return home for only his second appearance of the year in the Rifenburg Construction No. 115, trying to earn his 90th win at the track. The West Sand Lake, N.Y., driver scored a pair of top-10 finishes at the Battle at the Bowl and has won features at the Albany-Saratoga and Lebanon Valley speedways in 2021, raising his career total to an astounding 389 victories.

Edwards, N.Y.’s Tim Fuller is fresh off winning the Small Block Modified title at Can-Am Speedway, and he was a winner at Devil’s Bowl in July 2020. Fuller’s feature win at Land of Legends Raceway on Labor Day weekend marked the 250th overall victory of his career, and the former Super DIRTcar Series champion says he wants to collect No. 251 at Devil’s Bowl.

Erick Rudolph made his first laps at Devil’s Bowl in 2020 and he immediately found the groove. The Ransomville, N.Y., racer finished on the podium in all three features at last year’s Battle at the Bowl and scored a top 10 a month later in the Slate Valley 100. Rudolph is a two-time champion of the BRP Modified Tour and will make the six-hour haul from the Niagara Falls region searching for his first win on Vermont clay.

Gloversville, N.Y.’s Rocky Warner scored the biggest victory of his career at Devil’s Bowl in 2019, winning the Fabian Earth Moving Vermont 200 for Sportsman Modifieds. Warner just finished second in the prestigious Fonda 200 last weekend and will try to cap a late-season run with the Slate Valley 100’s big payday.

Right on Warner’s back bumper in third place at the Fonda 200 was Elizabethtown, N.Y.’s Mike Mahaney, who is seemingly on the brink of his first Devil’s Bowl win. Mahaney was stellar at the Battle at the Bowl last month, finishing second, third, and fourth in his three features, and he nearly won the inaugural Slate Valley 100 last year.

Vermont standout Adam Pierson, who recently earned his first Big Block Modified win in a weekly event at Albany-Saratoga, is looking for his first major victory in the division. Pierson is a veteran of the weekly Sportsman class at Devil’s Bowl but has used the second half of 2021 to focus on his Adam Gage-owned Modified program. Pierson has been hot lately, scoring top-five finishes in all four features that he ran at the Battle at the Bowl and finishing a strong fourth in the recent Vermont 200.

Many more top drivers are expected to go for the Slate Valley 100 checkers on Sunday, following a Super DIRTcar Series race at Albany-Saratoga on Saturday night. Initial commitments have been received by more than 30 drivers who hope to be able to tow to Devil’s Bowl on Sunday afternoon.

In addition to the main attraction, the popular Sportsman Modified division will have its own special event with a 40-lap, $2,000-to-win race using the “draw” format. The track’s weekly O’Reilly Auto Parts Limited Sportsman and Mini Stock divisions will also be on the Sunday card, with the Limiteds running a 30-lap feature and the Mini Stocks churning out a pair of 20-lappers in a “split field” format.

Grandstand general admission on Sunday, September 26, is $25 for adults and $5 for children aged 12 and under. Tickets are available online at https://buytickets.at/devilsbowlspeedway and at the speedway on race day. Infield drive-in parking is $35 for adults and free for children. Infield passes are sold only at the track on race day. Pit passes are $45 per person, available at the speedway or on the “Pit Pay” Mobile App; the minimum age in the pit area is 10 years old, with proof of age required for minors, per Vermont State Law.