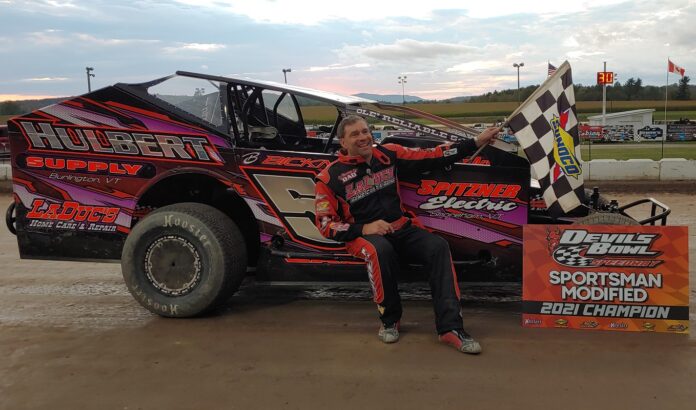 WEST HAVEN, VT – Tim LaDuc needed a perfect storm to brew over Devil’s Bowl Speedway to have a chance at the 2021 Sportsman Modified track championship, and the clouds showed up at exactly the right time. At the misfortune of Justin Comes, LaDuc pulled off one of the most improbable title runs in the Vermont track’s history on Saturday, October 2, to earn his first crown in 21 years.

The championship drama for the headline Sportsman Modified division began in qualifying. Tim LaDuc finished fourth in his heat to earn two bonus points but point leader Justin Comes – who entered the event with what was thought to be a fairly-comfortable 18-point cushion on LaDuc – struggled from the outset in his qualifier. Comes’ engine began overheating and he gradually fell further off the pace to finish fifth and earn just one point, leaving the gap at 17 points entering the feature – a difference of nine on-track positions.

Middlebury, Vt.’s Justin Stone was untouchable in the 30-lap feature. After starting on the outside lane of the front row, he rocketed into the lead and was never challenged. The race ran caution-free, and Stone’s quick pace left him more than a quarter-track ahead of the field. Mike Fisher took his second runner-up finish in the final three weeks of the season, equaling the best mark of his career. Josh Masterson had a strong drive from ninth at the start to take third place ahead of Frank Hoard III and Adam Piper.

Comes started 13th and LaDuc started 15th, and it was clear immediately that Comes’ car was still not up to par. Still, though, LaDuc needed a minor miracle – and he got one. As Comes dropped back, LaDuc went forward, making his way up to sixth place as Comes’ hurting powerplant left him languishing in 15th place, a lap down.

The unlikely difference of exactly nine positions – 18 points at two points per position – gave LaDuc enough of a tally to leapfrog Comes and land on his feet as the champion by just a single point, 967-966. The title was his first at Devil’s Bowl since capturing the crown in the former 358-Modified division as a rookie in 2000; Comes was eight years old at the time.

The Comes family got a bit of redemption a few minutes later, though, as Austin Comes – Justin’s younger brother – won the 25-lap finale for the O’Reilly Auto Parts Limited Sportsman division. The Middlebury, Vt., driver ran through the field from the 14th starting position to trail leader Katrina Bean at the final restart with three circuits remaining. Bean appeared to be on her way to her second victory of the season as she led the race from the start but Comes mounted a serious bid and took command just before the final lap began.

Bridport, Vt.’s Troy Audet was crowned the champion over Austin Comes by forty-one points, 974-933, after a stellar first season aboard a full-size Modified car. Audet’s only prior experience was just a single season in the 500cc Mini Sprint division in 2020; he won six races in the Limited Sportsman class in 2021, five of which came in the last eight weeks of the season.

The Limited Sportsman division also had a special, 20-lap “Non-Winners Shootout” race for drivers who had not won a feature event in 2021. First-year racer A.J. Munger of Benson Landing, Vt., had great battles up front with elder statesmen Bob Kilburn and Mike McGinn before taking over at the halfway mark and running away; his father, Gene, was previously a top Modified driver at Devil’s Bowl.

Rookie drivers continued to dominate the Mini Stock division in the season finale, winning both the 20-lap “A” Main and the 10-lap “B” Main. Rutland, Vt.’s Adam Mahoney was unstoppable in the “A” feature, leading all but the first two laps and scoring his third victory of the season. Former champion Mike Clark came from 23rd starting position to post the runner-up finish ahead of Brian Blake, Derrick Counter, and Ronnie Alger. Daryl Gebo was sixth, followed by Jake Barrows, Chris Lussier, Chase Allen, and Scott Chandler.

In the “B” race, Poultney, Vt.’s Damian Olden led every step of the way, but never by much as Clemmy Bell and Griff Mahoney kept him honest. Mahoney – Adam’s older brother – nipped Bell at the finish for second place, and they were followed across the line by Jake Mallory and Cody Dion.

The Super Stock and 500cc Mini Sprint divisions, having already crowned their champions on September 18, each held special “Open Competition” races. Fair Haven, Vt.’s Josh Bussino won the 20-lap Super Stock Open for the second-straight year, but only after a bit of mid-race dramatics.

With any body configuration permitted under the open-comp rules, champion Chris Murray removed his car’s roof and mounted a large, aerodynamic, billboard-style sail panel on the left side of his car. It appeared to be working, as Murray sliced from ninth into the lead just four laps into the race, but the sail panel partially collapsed, slowing Murray’s progress, and allowing Bussino and early leader Matt Mosher to catch up.

Murray held on until the halfway point when Bussino moved ahead at lap 10. Murray ran a close second until a flat tire did him in four laps later. Bussino then held off a determined challenge from Mosher for the win. Andrew FitzGerald finished third ahead of Mike Stender and Dave Striebel Jr.; Dave Striebel Sr. was uninjured after a flip on the opening lap. Mosher won the lone qualifying heat.

Twelve-year-old rookie Gage Provencher became the second-youngest feature winner in Devil’s Bowl Speedway history when he led all 12 circuits of the Friend Construction 500cc Mini Sprint race. The Bridport, Vt., youth was never challenged for the lead in the caution-free race and beat Kamden Duffy, Kaidin White, Austin Chaves, and Kevin Smith for the popular win.

The Enduro Series closed out the 2021 season with a wild-and-crazy 100-lap race paying $2,000 to the winner. The race drew 74 nearly-bone-stock entries for a “survival of the fittest” test that saw 13 red flags including two for rollovers; no drivers were injured in any of the accidents.

The “623” crew from Whiting, Vt., was once again well-represented, and the race came down to teammates Brian Denis and Eric Leno duking it out for the win. Leno had built a large lead in the second half of the race, but Denis caught him by surprise with two laps left, and the pair traded the lead three times in the final circuits. Denis made the winning pass in the final 200 feet of the race for the big payday.

Only 16 drivers were running at the finish, with only third-place Eric Friend and fourth-place George Wanner in the same lap as the leaders. Trevor Mears was fifth, one lap behind, followed by Levi Jackson and Sportsman Modified champion Tim LaDuc, who were each two laps down. Robert Tessier, Cody Greene, and Norman Morrill completed the top 10 in order.

The 2021 Devil’s Bowl Speedway season is now complete, and information regarding possible off-season meetings and an awards banquet will be released in the coming weeks.

Full Enduro Series finish will be posted at www.devilsbowlspeedwayvt.com